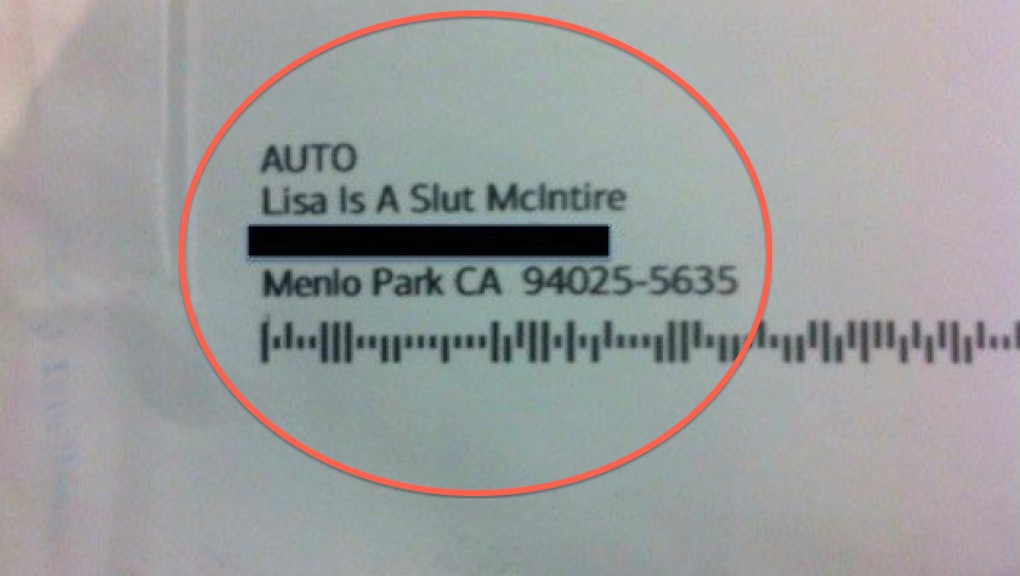 Most of us don't like getting junk mail, but at least we expect it not to offend us. San Francisco writer Lisa McIntire was in for a shock when she received a letter from Bank of America addressed to "Lisa Is A Slut McIntire."

"What kind of got my adrenaline pumping is that I'm a feminist writer on the Internet, so getting a piece of mail that my mom is opening that says I'm a 'slut' made me think, 'Oh god, which troll of mine is doing this?'" McIntire said to the Los Angeles Times.

The error — BOA apparently does not filter the word "slut" in its mailers — went uncorrected in the letter addressed to McIntire.

For its part, Bank of America apologized to McIntire on Twitter last night:

No one seems to know how these kind of offenses can be stopped. Forbes called the unfortunate mailing a "mystery," as if it was interesting but not important enough to be outraged over.

For now, social media looks like the best way of guaranteeing checks and balances between customers and outsize corporations capable of letting something like this get by. Maybe what we really need is to step up the public shaming. Bank of America sounded acutely aware of its mistake after it landed online:

McIntire's mistaken middle name appears to have come from Golden Key, a rewards program. Golden Key called McIntire yesterday to tell her that someone had changed her middle name to "Is A Slut" in their membership information between 2004 and 2008.

"They haven't been able to pinpoint how 'Is A Slut' became my middle name, but they're still investigating," McIntire tweeted.

Even worse, without the protective system Bank of America claimed it doesn't have, incidents like this can happen again in the future.