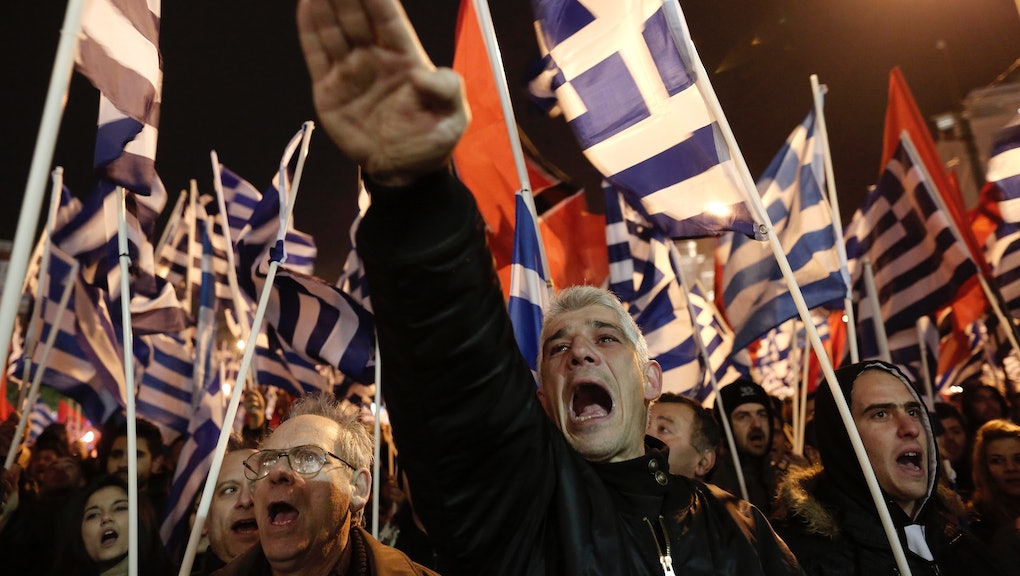 "They put us in jail. But did we falter? No, we did not. We are stronger, we are more powerful, and in a short time we will be in power."

As thousands of black-clad supporters chanted nationalist slogans holding red flags with swastika-like symbols, Ilias Kasidiaris, the spokesman for the Greek neo-nazi Golden Dawn Party, vowed to not let anything — not even prison itself — keep him from politics.

Kasidiaris does not talk about jail in a way a convict talks about "doing time." His words seem to belong to some high-spirited revolutionary of the America's Revolutionary War or to someone fighting for freedom in the Arab Spring.

Certainly not to a member of parliament awaiting trial for his participation in a criminal organization charged with murder and assault.

Yet this is the contradiction when it comes to the Golden Dawn: The party holds 18 of 300 seats in the Greek parliament and yet has six of its top members of Parliament (MP) behind bars, including its leader.

And despite the imprisonments, it remains the third-most popular party in opinion polls, behind the governing New Democracy Party and the left-wing opposition party, Syriza. In fact, an opinion poll published last week showed the party would get 8.7% of the vote if European Parliament elections were held now.

So, are the imprisonments turning Golden Dawn members into heroes in the eyes of the public?

To answer this question we first need to decipher whether the Golden Dawn is a political party or a criminal organization. This debate is not new.

But this past October, Greek authorities tried to resolve the debate once and for all, through an extraordinary crackdown on the Golden Dawn. More than 20 of its members were arrested after a Golden Dawn supporter murdered an antifascist rapper Pavlos Fyssas.

The Golden Dawn was labeled a criminal organization. Kasidiaris himself was arrested but released pending trial. He was charged on what prosecutors said was evidence linking the party to a series of attacks, including the stabbing of Fyssas and the murder of an immigrant.

Back in June 2012, the Athens prosecutor had also ordered Kasidiaris' arrest after he slapped Liana Kanelli, an member of the Communist Party, several times across the face during a talk show on national television. But this didn't stop him from getting elected to the Greek Parliament.

Nor is his pending trial intimidating him now. He has denied all wrongdoing, retained his MP status and decided to take up a new challenge: running for mayor of Athens.

"I will be a candidate for mayor of Athens," he told the party's cheering supporters last week, "even from inside jail."

He played the jail card, yet again, and portrayed himself as some persecuted Robin Hood.

Trying to portray themselves as heroes is a common strategy for Golden Dawn members, says Dora Pavlidou, a Greek social media expert and radio journalist who has hosted a daily national radio show for the past two years. And prison works perfectly for them in that sense, she adds.

"Take for instance the supposedly spontaneous photograph of a member of the Golden Dawn dressed in black accompanying an old lady to the local ATM, so as to protect her from an 'immigrant assault,'" said Pavlidou.

"The photograph was on the cover of a national newspaper, portraying the neo-nazis as local heroes. It was later proven that the elderly woman was in fact the mother of a Golden Dawn member," said Pavlidou.

But it was too late since the photograph had already been widely disseminated in the Greek social networks she said.

So now the Golden Dawn members were not only heroes. They were "imprisoned heroes." Whole rallies were organized for their release.

This helped their web propaganda, according to Pavlidou. "New Facebook and Twitter accounts spring out every day; their owners claim to be 'normal citizens' indignant for the injustice against the Golden Dawn," she said.

With the unemployment rate peaking at 27.8% in October, and youth unemployment nearly at 60%, desperation and suicides are peaking. And the Golden Dawn is setting up soup kitchens "for Greeks only," to "clear the country of immigrants" and defend Greece against its international creditors.

"Most of their promises do not even make sense. But it becomes difficult to discern that – especially for young people who are facing a grim future," said Tina Papathoma, who researches the effect of new technologies on the education of children and adolescents at the Institute of Educational Technology at the Open University in the United Kingdom.

Greek youngsters are very susceptible to the Golden Dawn's goebbelsian propaganda, Papathoma said. Social media has great power in this sense and teachers are not always equipped to counter the effect of this gush of hatred online, she says.

Under these circumstances, even jail time can be an asset for the Golden Dawn.