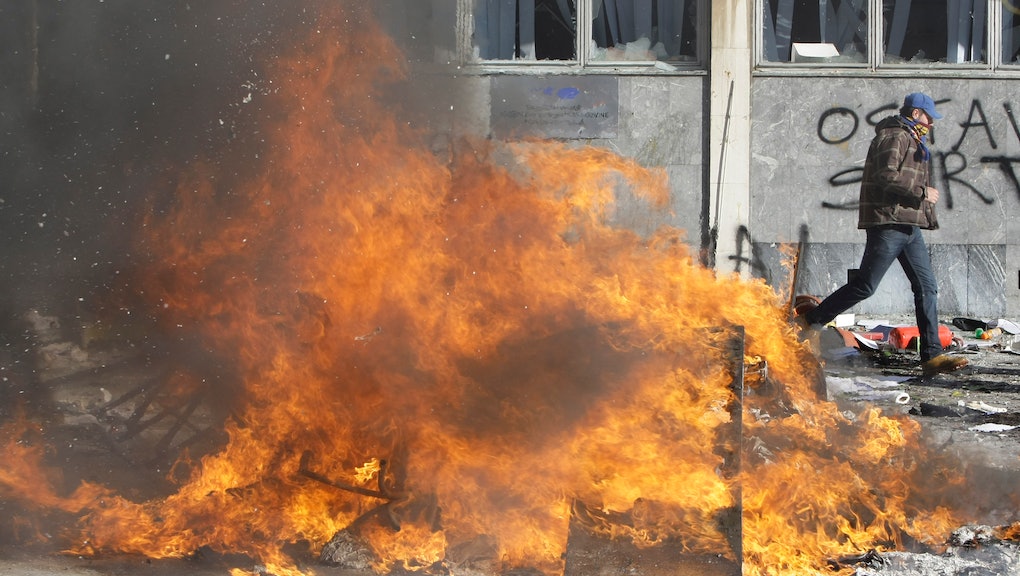 Massive Protests Have Erupted in Bosnia. Here's Why.

The news: The latest country to be stricken by massive protests against the status quo is Bosnia and Herzegovina, where unrest is spreading after "violent" strikes by thousands of unpaid workers in the northern city of Tuzla began reaching other cities. Reuters calls it the worst day of civil unrest in Bosnia since the bloody conflict of 1992-95, reporting 145 injured in the capitol of Sarajevo including 93 police officers after protesters attempted to force their way into the presidency and set fire to the cantonal government headquaters.

Thousands of people across the country have converged on government buildings, throwing stones and eggs, smashing windows, and setting garbage cans on fire.

"I think this is a genuine Bosnian spring. We have nothing to lose. There will be more and more of us in the streets, there are around 550,000 unemployed people in Bosnia," said activist Almir Arnaut.

The background: The protests are particularly touchy during an election year defined primarily by widespread discontent over high unemployment (Reuters claims 27.5%, but Actual Data reports a staggering 44.5% of the labour force was looking for work in November 2013) and rampant corruption in everything from the judiciary and police to public services.

But the flashpoint was when four state-owned companies in Tuzla that employed most of the population were privatized. While contracts obliged them to invest in the assets and make them profitable, instead the companies decided to sell all assets, stop paying workers, and file for bankruptcy between 2002-2008. Current Tuzla leader Sead Causevic says that his government can do nothing to correct the sins of the past and told despairing workers to turn to the courts, which have yet to reach any rulings.

But while Tuzla is identified as the origin of the riots, no single cause could be found unifying the protesters other than common opposition to the government and a sense of deepening despair. Some protesters claimed solidarity with the Tuzla workers. A small minority seems mostly interested in looting.

"This is so sad," a woman named Vildana told Reuters while watching the government building burn in Sarajevo. "It took four years of war to destroy it and vandals now burned it in one day. This is just as in 1992."

The BBC reports that Bosnian media expects senior leadership across the country including Causevic and Munib Husejnagic of Zenica-Doboj canton to begin resigning.