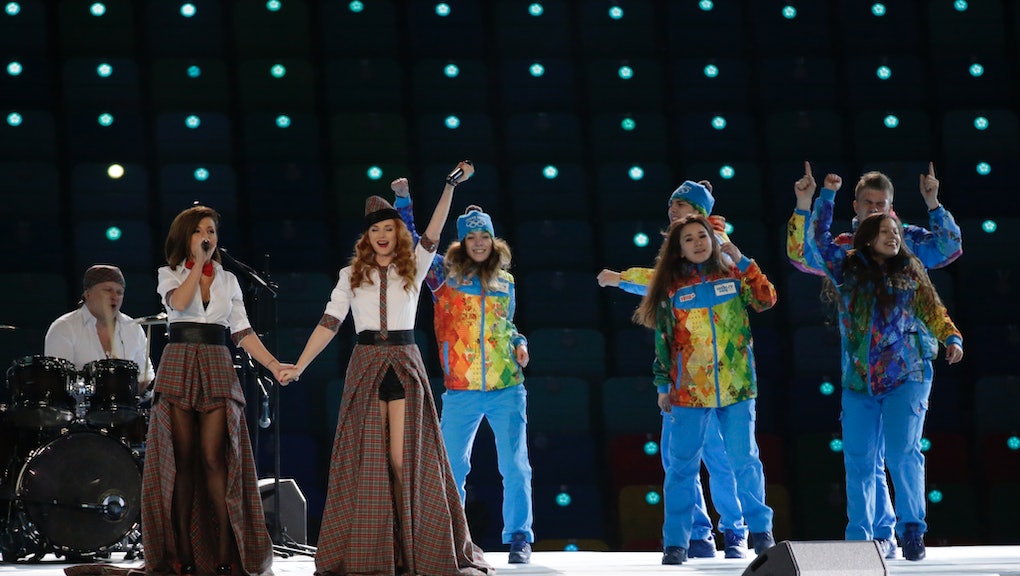 The 2014 Olympic games are already underway in Sochi, but one moment raised a few eyebrows during the opening ceremony: the performance by the Russian pop girl act t.A.T.u.

The now-defunct duo, composed of Lena Katina and Yulia Volkova, gained notoriety in the early 2000s for what many called their "pseudo-lesbian" stunts. In Russian, their name stands for "this girl loves that girl"; they also put on a shock performance at the 2003 MTV Music Awards, where hundreds of women stripped down and made out with each other.

Not shockingly, t.A.T.u. refrained from putting on such a provocative show in Sochi, but the fact that they were chosen at all surprised many. In the midst of heavy criticism over Russia's anti-gay legislation and growing concerns over the safety of gay people in the city, Katina and Volkova limited themselves to holding hands and hugging as they performed their 2003 single "Not Gonna Get Us" in matching outfits.

Here is their Opening Ceremonies performance:

Volkova posted this Instagram photo with Katina before they took to the stage:

There's no word on President Vladimir Putin's reaction to the performance, but he seems pretty okay with "gay propaganda" as long as it's perpetrated by attractive women who are heterosexual in real life.

If you want to get a glimpse of t.A.T.u.'s homoerotic schoolgirl shtick in its heyday, check out this music video for their 2002 hit "All The Things She Said," which has over 51 million views on YouTube:

Now, what was Putin's stance on "gay propaganda" again?