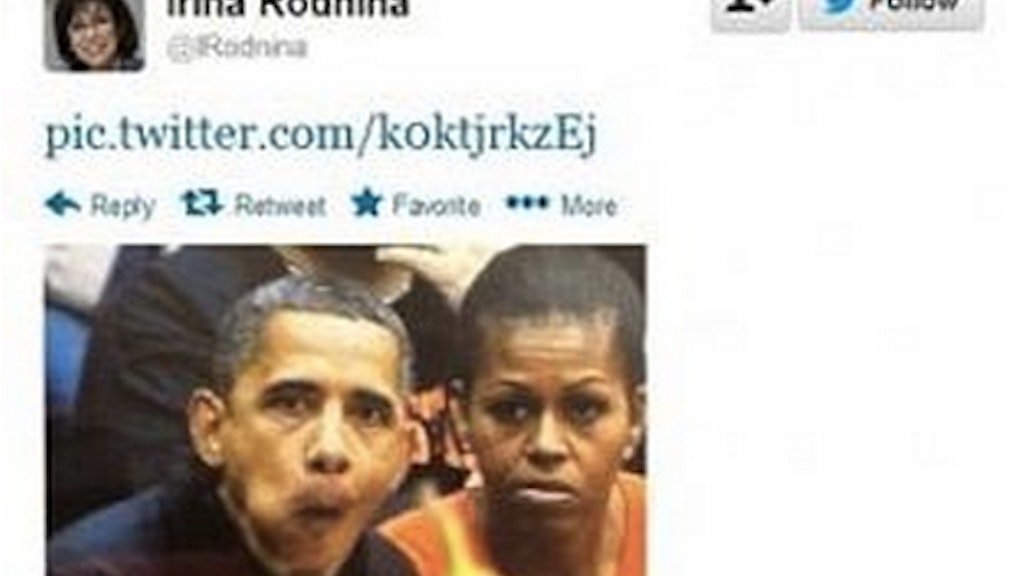 The lighting of the Olympic cauldron is a big deal. It marks the official start of the Olympic games and signals the spirit of the international competition. So, usually the person who actually does the lighting is a big deal. This year, one of Russia's most successful figure skaters and currently public chamber member Irina Rodnina was the given the honor of lighting the Olympic flame. Only one problem — she's pretty racist.

In September 2013, the three-time Olympic gold medalist tweeted out this doctored photo of President Obama and First Lady Michelle Obama, showing the couple looking very interested in a banana — yeah, it's pretty clear what the photo was suggesting. Ronina posted the pic to her Twitter account. It has since been removed.

According to the Guardian, despite deleting the tweet, Rodnina said there was nothing wrong with the photograph and that it had been sent to her by friends in America. "Freedom of speech is freedom of speech, and you should answer for your own hang-ups," she wrote. Rodnina stood by her tweet and argued that the wave of criticism was just a conspiracy plot concocted by liberal journalists and other Russians. While the media does have a tendency to blow things out of proportion, that doesn't change the fact that Rodnina tweeted the photo to begin with, and that this photo is racist.

In response, U.S. ambassador to Russia Michael McFaul wrote on Twitter that Rodnina was guilty of "outrageous behaviour, which only brings shame to her parliament and country."

However, some Russians have come to her defense, arguing that Rodnina is a private citizen (not totally true) and that the Olympics are about sports, not politics (technically true, but this year, not really).

"She is a three-time Olympic champion, one of the most respected in the world of Olympic athletes," organizing committee president and CEO Dmitriy Chernyshenko said during a regular press conference. "I want to stress that Olympics is not about politics, and any political talks about discussions are inappropriate."

"What Irina Konstantinovna put on Twitter is her business; it is her own personal space," wrote the pro-Kremlin television presenter Vladimir Soloviev in a Moscow freesheet on Monday. "This is not a big scandal."

While a respect for privacy is important, Rodnina is a public official, having been elected to the Public Chamber of Russia in 2005. Soloviev followed this up with a world-class zinger that's sure to shut-up all the haters.

"I advise everyone who attacked her that the next time they go out for a coffee, they should not call it a black coffee but an African-American coffee."

Solid work all around.