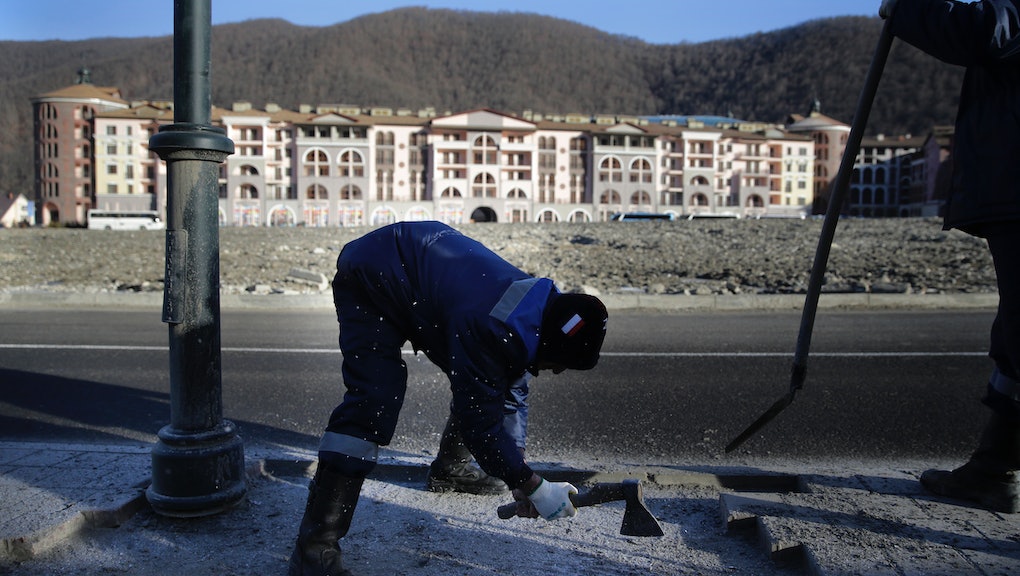 As Western journalists landed in Sochi for the Olympic Games a few days ago, they took to social media to complain about their plumbing situations, dirt in their water and debris in their hotel rooms. The idea that Sochi is one giant embarrassing mess for Russia has spread like wildfire — a sweeping trend that is best represented by the Twitter account @SochiProblems. The account collects complaints in the form of photos or microblogs of Westerners traveling in Sochi, and churns them out in meme-like tweets, with the written voice of a Russian who speaks poor English.

As of Saturday night, @SochiProblems had over 320,000 followers - over 100,000 more than the official Sochi Olympics Twitter account.

New Republic senior editor Julia Ioffe reported out of Moscow that Russians are not pleased by the trending #SochiProblems. Rather, they are "puzzled by why the Americans and the British are so very happy that the details are a little screwy, the way they generally are in Russia."

Ioffe wrote that Russians are calling the phenomenon "zloradstvo," or "malicious glee."

As faves and retweets on @SochiProblems explode, it's clear that the meme is based on cultural misunderstandings borne out of sheltered ignorance: The posts reflect actual issues that directly impact the quality of life of Russia's 143 million people.

For instance, @SochiProblems posted this photo of dirty water that Chicago Tribune reporter Stacy St. Clair tweeted from her hotel room in Sochi:

Peach juice? How about liver disease juice? Most Russians don't drink water from the sink due to fear of illness, and the ones who can't afford bottled water just boil it and hope they don't get sick. Only around half of Russians had access to drinking water that met reasonable health standards in 2002, according to Jean Lemierre, the president of the European Bank for Reconstruction and Development. And the situation is still so bad that Putin himself admitted last May that even he has dirty water running from his sink.

According to an intensive online report compiled by Putin opponent and anti-corruption lawyer Alexei Navalny, construction giant Russian Railways set up a giant illegal dump for its Sochi railway project near the local village of Akhshtyr, which dried up the whole town's water supply. The dump's sewage might also be seeping through porous rocks into underground springs that feed the Mzymta River, Sochi's primary source of drinking water. So this oversized garbage disposal is probably to blame for the hotel's "peach juice."

And as if dirty water wasn't enough for these poor journalists, the hotel rooms don't have coat racks! Here's a retweet by @SochiProblems of CBC Radio-Canada commentator Mark Connolly on his apartment foyer:

While this is admittedly a funny "only in Russia" kind of thing, it's also an indicator that the construction of the games was chaotic. Under pressure to quickly build a glorious Olympic village from a patch of mud, Russian corporations ended up denying their 70,000 workers wages, sanitary accommodations and, in many cases, basic human rights. As Ukrainian worker Maxim told Human Rights Watch about his experience in construction for the Olympics: "People work, they don't get paid, and leave. Then a bus comes and unloads a fresh group of workers to repeat the cycle."

If you worked under such conditions, would you take the time to distribute the coat racks?

And here's a #SochiProblem that went super viral, because language, I guess:

I get it, in Soviet Russia, language translates you, and all of that. But what's really interesting here is that in Russian, "tongue and "language" are the same word, which is how that mistake happened. It would be nice if someone tried to understand that, as opposed to writing it off as a meaningless snafu. (As for "in the test," — that translation probably happened because the Russian word for dough is "testo," and someone got confused. So, if you put those two words together, you can tell the phrase was supposed to be "tongue wrapped in dough," or "tongue dumplings." Now quick! Try to translate "tongue dumplings" into another language. You might find it difficult.)

When Western writers point out Sochi Olympic blunders while also mocking the way Russians speak English, they only diminish their own street cred and fuel backlash. If Americans focus on shallow cultural differences, like what they think are funny sounds that Russians make, they'll continue to believe all Russians are like Boris and Natasha from Rocky & Bullwinkle. In turn, they will lose authority to critique real issues in Russia. Case in point: Kate McKinnon's meta-mockery of a village babushka on a Saturday Night Live "Weekend Update" in January.

So this is my plea to @SochiProblems, whining journalists and social media fiends: Have just a bit more respect for Russians, because while you might think you're just ridiculing the Olympics, for many, this is their everyday life. Their government might have just spent $51 billion on possibly the most corrupt Olympic games ever, but most of them are just along for the ride.