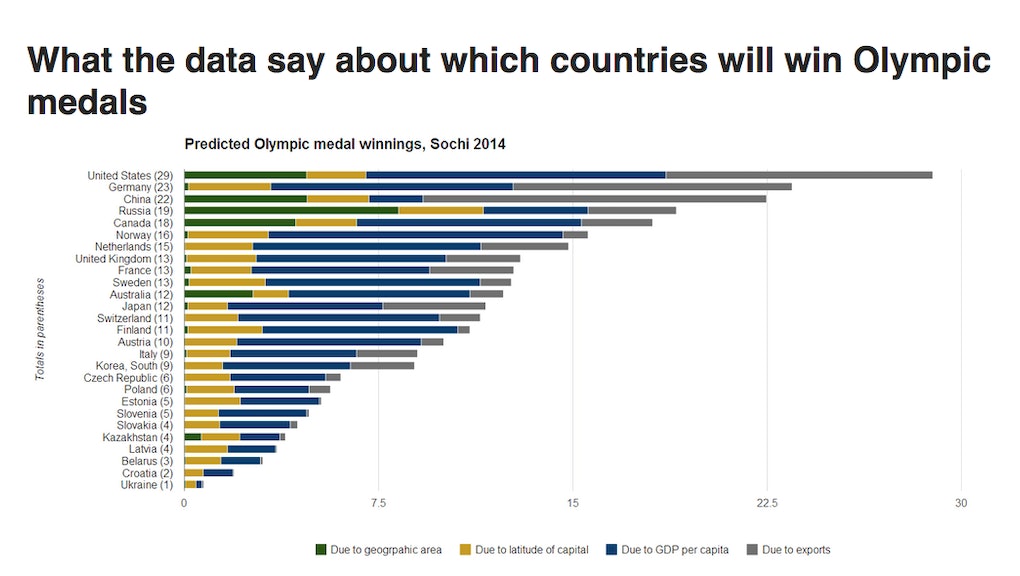 Olympic predictions usually rely on past performances, and for good reason: countries with successful programs are more likely to have the best training and resources for their athletes.

But for their own statistical model, Tim and Dan Gaettinger took things in another direction, skewing data from past Olympics completely. Instead, they focused on four rather unlikely factors for each country: its geographical size, the latitudinal location of its capital, its economy relative to its population and the value of its exports.

The result? The analysts predict that the U.S. will lead the pack with 29 models, followed by Germany, China, Russia and Canada:

The model took the Gaettinger brothers four years to perfect, and they ran countless regression models on a range of factors, including geographic, economic, political and sociocultural markers. They found that a strong predictor of a country's Winter Olympic success was how it did at the Summer Olympics two years earlier. Still, they found that the factors that most consistently predicted Winter Olympics medal count related to a country's geography and its economy.

"It's interesting when you bring together data that doesn't naturally co-exist," Tim said. "You don't usually see medal counts lined up against all this economic data."

Here is a graph of the countries that the prediction model underestimated or overestimated by at least three total medals for the 2006 and 2010 Olympics combined (for an interactive version of this graph, visit Fast Company):

While there were a few significant outliers, the Gaettingers were able to accurately predict 80% of countries' 2006 and 2010 medal count within three medals. Several factors that skewed the model included home-court advantage, exceptional individual performances and countries' specialization of sport (e.g. South Korea's dominance in short-track speed skating).

Still, the model reflects what we may intuitively know: large, cold countries with financial stability are likely to have the best resources to train their athletes for the Winter Olympics.

For comparison, this is the medal count as of Monday morning:

The current medal count looks very different from what the Gaettingers predicted, but we are only three days into competition — much will change over the next couple of weeks.