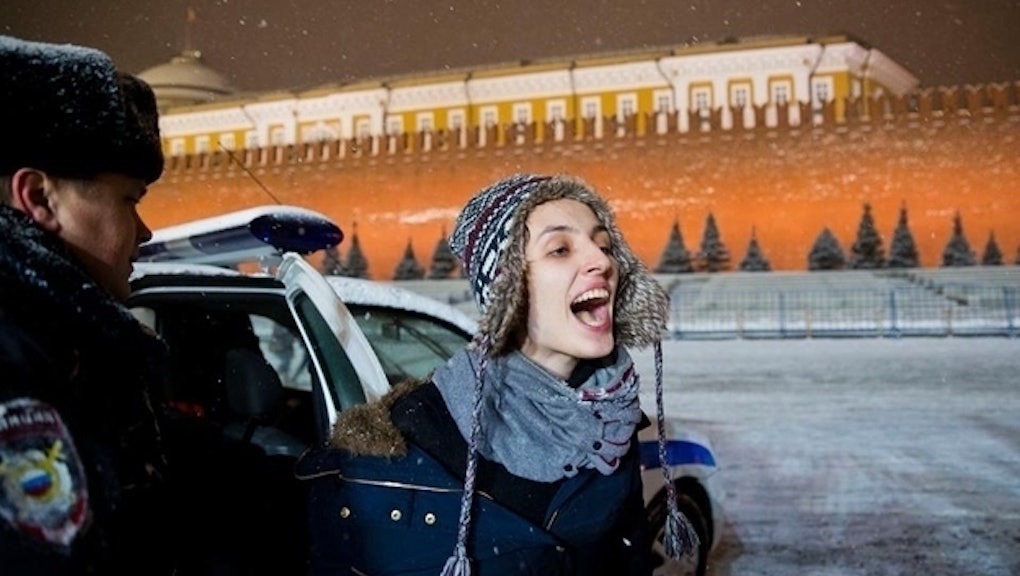 The International Olympic Committee (IOC) has been catching a lot of flak for its unwillingness to engage with Russia's anti-LGBT policy — but this latest tone-deaf response shows just how little it cares.

In the wake of 14 LGBT protesters being arrested on Friday, BuzzFeed reached out to the IOC for a comment. While the activists were in Moscow and St. Petersburg, their protests were directly linked to the Olympics, and took place on the day of the opening ceremony. The IOC then emailed back this response:

"We understand that the protesters were quickly released ... As in many countries in the world, in Russia, you need permission before staging a protest. We understand this was the reason that they were temporarily detained," wrote Emmanuelle Moreau, the IOC's head of media relations.

Yes, the protests were "quickly released," in the sense that they were "beaten and threatened with sexual abuse," then let go by the police. According to BuzzFeed, "police officers almost broke two of the protestors' arms by closing the door of the cage, some were kicked by police officers while handcuffed to the cage, and one protester was momentarily choked by a police officer placing his arm across his throat."

At the opening ceremony, IOC President Thomas Bach did make a statement about the Olympic message of peace and cooperation. Unfortunately, this part of his speech got cut out from the NBC broadcast:

"Olympic Sport unites people. This is the Olympic Message the athletes spread to the host country and to the whole world. Yes, it is possible to strive even for the greatest victory with respect for the dignity of your competitors. Yes, yes, it is possible — even as competitors — to live together under one roof in harmony, with tolerance and without any form of discrimination for whatever reason," Bach said during his remarks.

It's a nice sentiment, but one that is not backed up by any kind of real action against discrimination. Since last August, the IOC has stood by its belief that the Olympics "are not a place for proactive protests or demonstrations": "By its nature, the Olympic Games cannot become a platform for any kind of demonstration and the IOC will not accept any proactive gesture that could harm their spirit and jeopardize their future," it said at the time.

So according to the IOC, voicing opposition against discrimination is considered as harming the spirit of the Olympics, while actual discrimination perpetrated by the host country is okay, since the protesters were released so quickly, after all.

Gay rights activists were not the only protests who were arrested on Friday. According to the New York Times, at least 61 people were arrested in Russia that day, including a group of Circassians, who were attempting to bring attention to the plight of their ancestors, who were driven out of Sochi 150 years ago. Environmental activists have been arrested in Sochi as well.