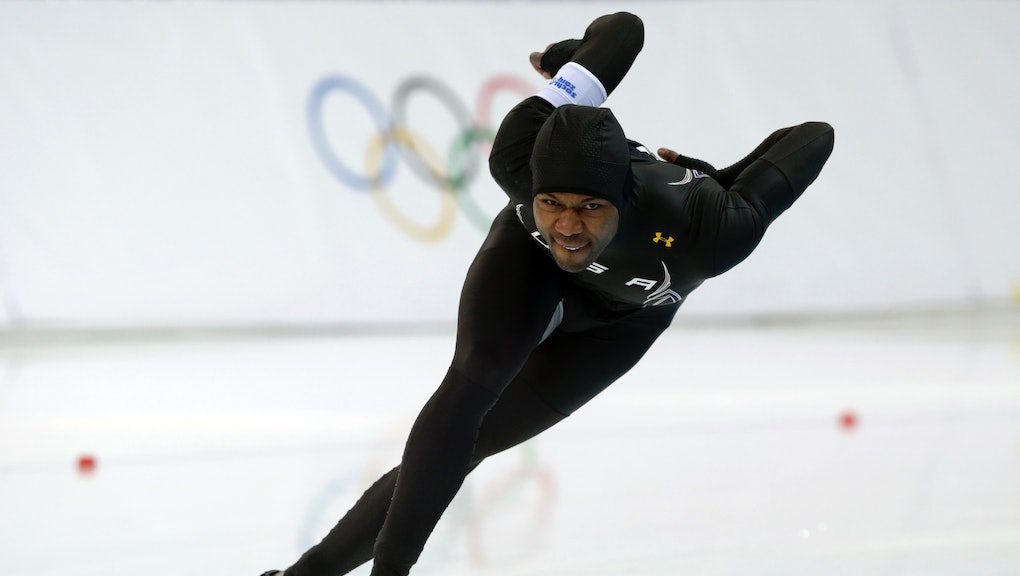 Need a Favorite For the Sochi Olympics? We Suggest Shani Davis.

A startling number of athletes on Team USA got taken out of the competition just as the Sochi Olympics began. Fan favorites (Lindsey Vonn, Shaun White) as well as popular up-and-comers (Heidi Kloser, Maggie Voisin) were prevented from competing due to their injuries, while veteran Olympians such as Jeremy Abbott and Bode Miller made surprise blunders.

In light of these disappointing developments, we humbly suggest a new favorite: Shani Davis.

And there's a lot riding on him this year. A groin injury in late 2012 sidelined the 31-year-old Davis for most of last year, and he'll be defending his title from younger competitors. There's also much pressure to continue making history: many expected both White and Davis to become the first American men to win three consecutive golds at a single Winter Olympics event. Now that White is out, it's on Davis to break the record.

In addition, if Davis medals at both the 1,000 meter and 1,5000 event, he will become the most decorated male long-track speedskater in U.S. history, with record six career Olympic medals.

So far, Davis seems to be taking everything in stride: "It's just more icing on the cake. Or putting the cherry on top of a sundae," he told USA Today, adding that he was quite happy with his current record. But he said he was still determined to go all-out at Sochi: "I'll be keeping in mind some of the sacrifices and generosity that people have had to get me where I am. I want to do my best not only for myself, but for them, and we'll win this race together."

His quote is especially significant given how hard he has worked to get to where he is today. Growing up with his mother in the South Side of Chicago, Davis did not have the resources or training to pursue skating at first. At six, he showed an interest and talent in skating, and he and his mother commuted 45 minutes to the nearest rink in Evanston. By the time he was 10, they moved to Evanston so he could commit to the sport.

"I loved that it took me out of the South Side of Chicago," Davis said. "It broadened my horizons."

But in spite of his inspiring story and his undeniable success, Davis has shown reluctance to mug the spotlight. A 2010 New York Times profile called him "prickly," and that "as a black man in an almost entirely white sport ... Davis is an outsider and a trailblazer."

While some consider Davis to be aloof or reserved, he has maintained that his main job is to skate, and not to become a celebrity. But the new attention on his ongoing success is certain not unwelcome.

"It's not like I ever didn't want to be the face of the Olympics. There were other athletes who had a higher profile," said Davis. "I was a goodie in a vending machine behind eight other awesome snacks. Now people are enjoying me for who I am."

We're pretty sure he's the most awesome snack in that vending machine. It also helps that he looks exactly like a certain Pixar superhero: