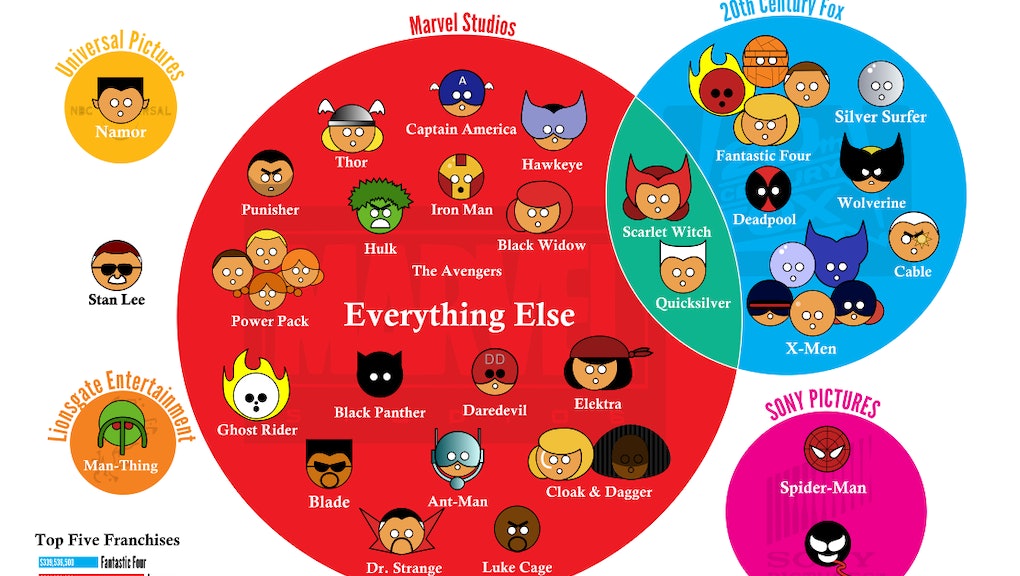 Spider-Man finds himself in lots of sticky situations in his movies. But his off-screen life is equally full of headaches. In the 1990s, a floundering Marvel Comics sold the rights to many of its characters to different studios, thereby relinquishing its claim to their likeness and the right to use them in any subsequent movies. Spider-Man went to Sony.

Why is this important? This infographic comes after months of rumors suggesting Sony might consider selling the Spider-Man rights back to Marvel. As of now, the Spider-Man films constitute the most lucrative film franchise in the Marvel universe, grossing over $1.5 billion domestically since 2002. Some have speculated that Sony might respond positively if Disney, now owner of Marvel Comics, offered to buy back the rights for $3-4 billion, once Sony completes the fourth film in the current iteration of the franchise. The Amazing Spider-Man 2 comes out this spring. Part 4 likely won’t be released until 2018.

The sale would make it possible for Spidey to appear in one of the upcoming Avengers films, and team up with the likes of Iron Man, Captain America, and the Incredible Hulk. Sadly, this is not to be. Sony Entertainment co-chairman Amy Pascal debunked the rumors last spring, saying Sony would never get rid of the web-slinging hero as long as she’s around. And why would it? Once you get your hands on a billion-dollar cash cow, the last thing you want to do is sell it.

And yet, somehow, life goes on. Though many fans would love to see these heroes team up, the intricacies of the film business conspire to keep them apart. Perhaps this will change some day. But for now, we’ll have to simply enjoy them on a smaller group basis, whether through the Avengers films or in upcoming individual forays like Captain America: The Winter Soldier.

Either way, the results thus far have been pretty entertaining.