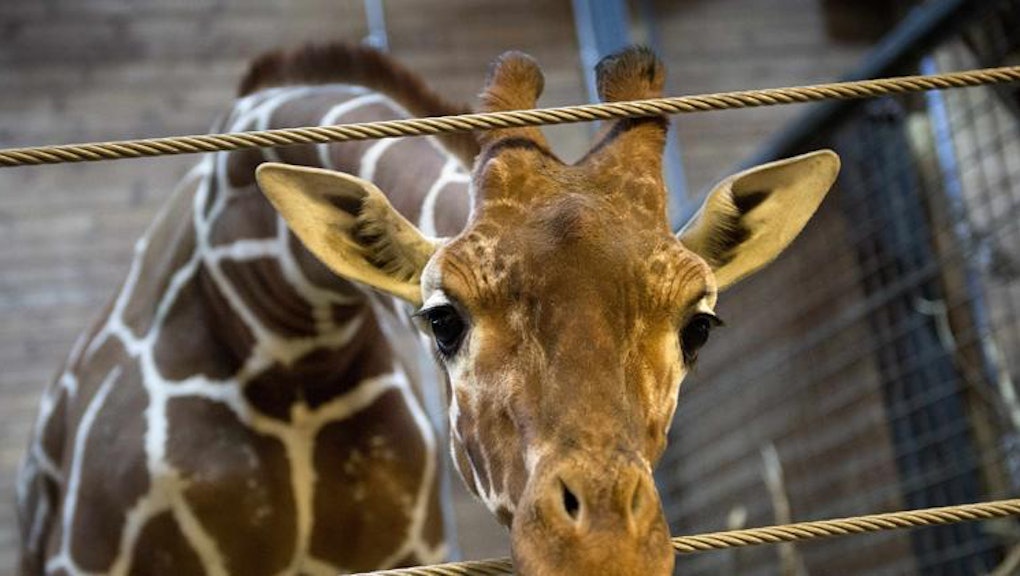 1. Why did the zoo end up with a young giraffe it couldn't keep?

2. What usually happens when zoo-bred giraffes are ready to leave their family?

3. Then why did Copenhagen Zoo have to euthanize the giraffe?

The zoo is part of an international breeding program. To maintain a healthy giraffe population across European zoos, genetic diversity is key. Genetic diversity preserves a broad array of traits that enhance survival of a species that would be lost through inbreeding. Inbreeding also increases the risk of hereditary diseases, and therefore is a significant risk to small, captive populations. To maintain a successful breeding program the Copenhagen Zoo annually euthanizes some 20 to 30 healthy animals, which are considered genetically unfavorable for reproductive purposes. In modern zoos, a large importance is placed on maintaining genetic repositories that reflect gene pools in the wild, especially with many creatures under the threat of extinction.

4. Was contraception an option?

In the American zoo system, contraception is favored, administered to giraffes by serving hormones in their feed. Many in the U.S. see this as a better approach because it prevents zoos reaching the carrying capacity in the first place, allowing for better care overall. Euthanasia is not accepted on an emotional or ethical level.

By contrast, the European Association of Zoos and Aquaria (EAZA) avoids the contraception approach because preventing animals their natural mating ritual can lead to serious behavioral issues and destructive behavior. In some cases, the use of birth control may lead to issues in the reproductive tract such as infection and cancer. So European zoos allow their animals to mate and raise their young in order to try and maintain more “normal” behavior in their adults, and euthanize the offspring when they grow up. Proponent of this strategy state that it mimics the scenario in the wild, where many offspring die from predation, starvation or injury.

Traditionally castration of giraffes is difficult, because it requires sedation. Due to its size, many giraffes don’t survive the physical impact of falling during the process. In terms of zoo capacity, castrated animals are unfavored because  they require resources that might otherwise be used on animals that could better help to maintain genetic diversity of the species. A neutered giraffe increases the risk of inbreeding, because it means one less set of useful genes in a very limited pool.

6. Why didn’t they send the giraffe to another zoo?

When Marius’ circumstances became apparent, many other zoos including the Yorkshire Zoo offered to take in the giraffe. Offers outside EAZA were rejected immediately because according to EAZA principles, sending the giraffe to another zoo may lead to the animal being sold off into circuses or private collections. The Yorkshire Zoo, which is an EAZA member and maintains a non-breeding giraffe population, was rejected because Copenhagen believed that space should be reserved for a more “genetically important giraffe.”

The decision to deny the offer of relocation by an EAZA member is controversial, even though the scientific explanation makes sense. Yorkshire wanted the giraffe, so why should Copenhagen be able to make a call on resources of another institution, if the life and quality of life of the giraffe is the top priority, which they claim to be?

7. Or release it into the wild?

The Copenhagen Zoo stated that releasing animals back into the wild is problematic because they are likely to end up in worse captive conditions, being comparatively easy targets for hunters and poachers. However they did not adequately address the prospect of rereleasing to game reserves, only stating the official release programs were currently not being carried out. As with many controversial topics, one has to think that money is the primary issue here. It’s simply much easier to put down unwanted offspring that spend large amounts of money on a global system that reintroduces animals back into the wild.

8. Why was there a public autopsy?

At zoos, autopsies are conducted on all animals that die. Copenhagen Zoo chose to conduct Marius’ autopsy  publicly because they believed it would contribute to the education program of the zoo. The zoo has previously performed many  public autopsies to much less fanfare.

While their past behaviour is certainly consistent and all autopsies are indeed extremely valuable from an education and research perspective, the Copenhagen Zoo’s deafness to public opinion and insensitivity in this case is  shocking (demonstrated aptly by the quote below). Given the global criticism, to go ahead with the public autopsy showed an unnecessary bravado and unwillingness to engage in genuine dialogue with the wider public, which all science should ultimately strive to do.

9. What was the response to the Copenhagen Zoo’s actions?

There was a large outcry from the public around the world — 20,000 signed an online petition to try and save Marius, and an individual even offered 500,000 Euros to prevent the euthanasia. There was a small protest at the zoo on the day of the public autopsy. All fell on deaf ears.

10. An examination into the practices of zoos

One of the most important aspects that has come out of Marius’ story is a renewed global debate on the role of zoos in our society. Zoos do important work, both in conservation and in raising awareness and engaging the public about environmental wildlife issues. However, zoos do this work while making a number of unavoidable ethical compromises. These include: (1) to  prioritize quality of life and natural behavior but employ euthanasia; (2) to prioritize individual survival but compromise natural behavior; (3) to prioritize both life and natural behavior, but significantly reduce the health of the overall population.

None of these are ideal, and neither is a fourth option of eliminating zoos completely and accepting that many species will go extinct.

It can’t be ignored either that zoos are for-profit organizations. So while their role in conservation and education is valuable, one can’t ignore that there is an incentive to commodify animals by favoring those which can draw large crowds. This motive is particularly dubious for the issue of euthanasia because, even though the science makes sense, baby animals are undoubtedly crowd pleasers.

The Copenhagen giraffe incident is not solely the result of a bad zoo by itself, but of a highly questionable zoological parks system around the world. These complex issues are ones that we as a civilization have to increasingly face up to as human populations continue to accelerate the loss of wildlife and the natural world around us.