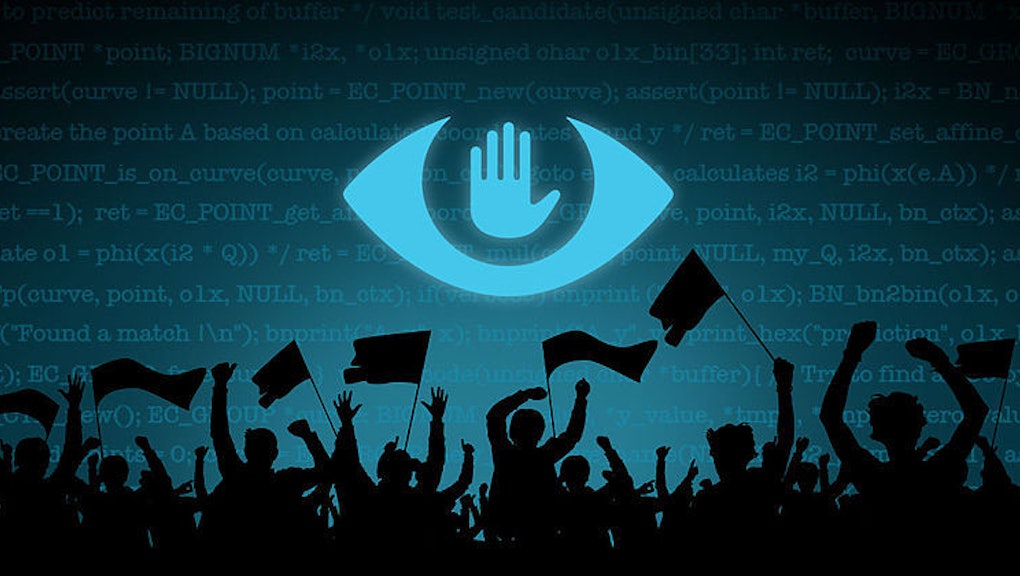 While the National Security Agency claims it doesn't spy on Americans unless they're known to be linked to foreign terrorism, the toolset they're building looks an awful lot like a dictator's wish list.

In short, the NSA is working very hard to make sure that it can watch the electronic activities of anyone, anywhere on the planet — and few, if any, inhibitions on where that searchlight can be aimed given the right authorization or lack of oversight. Foreign leaders like Angela Merkel are just some of the most visible targets of the NSA, which is busy building backdoors into software ranging from Skype and Gmail as well as hardware devices from your cell phone to your desktop.

From the Brian Lehrer show, here's a list of 29 capabilities the NSA is currently known to maintain, ranging from mission-essential to downright troubling (H/T Associate Producer Jody Avirgan).

1. It can track the numbers of both parties on a phone call, as well location, time and duration. (More)

2. It can hack Chinese phones and text messages. (More)

3. It can set up fake Internet cafes. (More)

4. It can spy on foreign leaders' cell phones. (More)

5. It can tap underwater fiber-optic cables. (Clarification: Shane Harris explains that there were reports the NSA was trying to tap directly into cables using submarines, but is now more likely trying to intercept information once it has reached land.) (More)

6. It can track communication within media organizations like Al Jazeera. (More)

7. It can hack into the UN video conferencing system. (More)

8. It can track bank transactions. (More)

9. It can monitor text messages. (More)

10. It can access your email, chat, and web browsing history. (More)

13. It is trying to get into secret networks like Tor, diverting users to less secure channels. (More)

14. It can go undercover within embassies to have closer access to foreign networks. (More)

15. It can set up listening posts on the roofs of buildings to monitor communications in a city. (More)

17. It can track the reservations at upscale hotels. (More)

18. It can intercept the talking points for Ban Ki-moon’s meeting with Obama. (More)

20. It can hack computers that aren’t connected to the Internet using radio waves. (Update: Clarification — the NSA can access offline computers through radio waves on which it has already installed hidden devices.) (More)

21. It can intercept phone calls by setting up fake base stations. (More)

22. It can remotely access a computer by setting up a fake wireless connection. (More)

23. It can install fake SIM cards to then control a cell phone. (More)

24. It can fake a USB thumb drive that's actually a monitoring device. (More)

25. It can crack all types of sophisticated computer encryption. (Update: It is trying to build this capability.) (More)

26. It can go into online games and monitor communication. (More)

27. It can intercept communications between aircraft and airports. (More)

29. It can tap into the links between Google and Yahoo data centers to collect email and other data. (More) (h/t)

Would you trust an intelligence organization with access to all of these powers?

Here's how the Internet is fighting back: On Tuesday, Feb. 11, Reddit, Mozilla, and Tumblr (owned by Yahoo) are planning to co-ordinate one of the biggest online protests in history to show their discontent with the NSA's invasive electronic surveillance techniques and collection of metadata on millions of web users.

It's called "The Day We Fight Back," and in addition to the Internet giants named above, the protest will include familiar faces like the American Civil Liberties Union and the Electronic Frontier Foundation as well as new companies like UpWorthy and Thunderclap. While previous protests like the one against the Stop Online Piracy Act (SOAP) used extreme tactics like sitewide service blackouts, this one is more restrained — companies and sites are asked to install a banner in support of the protest, while everyday users can pitch in by sharing updates and making memes.

What will sharing memes and banners accomplish? The organizers of the event wants you to spread the word to increase awareness, and "make it clear that such behavior is not compatible with democratic governance."

Still, lots of people either don't care about the NSA's programs or don't understand just how massive they are. And depending on how you ask the question, upwards of 56% of Americans are just fine with the NSA doing what it claims it needs to do to fight terrorism. But they might do well to remember the words of Cardinal Richelieu:

If you give me six lines written by the hand of the most honest of men, I will find something in them which will hang him.

On Tuesday, do your best to spread awareness of the surveillance net hanging over the heads of Americans, and let your leaders know you won't put up with it.