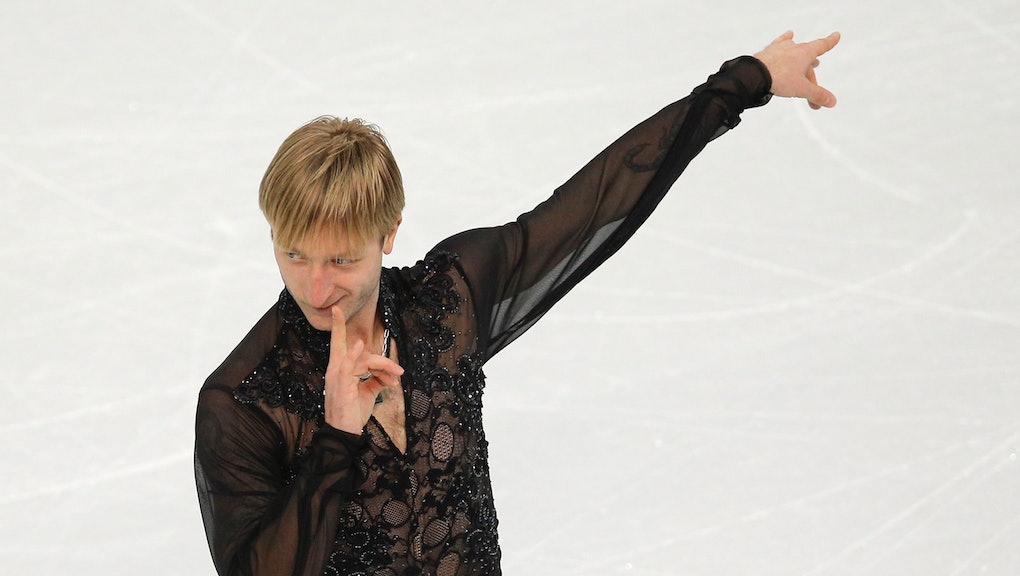 If you feel like you're having Olympic figure skating déjà vu, you're probably not alone. Russian figure skating legend and 2006 Olympic gold medalist Evgeni Plushenko is making another Olympic comeback after four years of very limited participation in the sport. Once again, his return to the Olympics has been surrounded by drama and controversy. His selection to the Russian Olympic Team over National Champion Maxim Kovtun turned some heads in January, and now the Internet is buzzing over whether he will actually compete in the men's event later this week after earning a gold medal on Sunday in the team event. And as always, his presence at the Olympics has invited heated debate over the high marks he receives.

At age 31, years of intense training have caught up with Plushenko's body. Injury interfered with his plans to skate in the 2012 and 2013 World Championships, and he underwent major back surgery last January. However, it should be no surprise that the man found the strength to fight through physical adversity and return to the Olympics against the odds. Nobody believes in Evgeni Plushenko more than Evgeni Plushenko. An athlete who has the confidence (arrogance?) to name himself the Olympic platinum medalist in 2010 and then skate an Olympic long program to a collection of his "greatest hits" is also one you would expect to land a perfect quadruple toe+triple toe combination at the Olympics on a busted knee.

Love him or hate him, there is no denying that Evgeni Plushenko is a badass competitor. But don't take it from me. Here are 15 quotes from the man himself that show his larger-than-life personality:

1. On his chosen profession:

"I think I was born to be a figure skater, I think it was fate, and I thank God for letting it happen."

"At school I fought sometimes. Kids were saying that figure skating is sport for the girls. Then I had to prove them wrong."

3. On the nuances of figure skating:

"I just adore jumping. I do the rest as it is supposed to be done."

"My main competitor is myself."

5. On perfecting the humble-brag:

"Viktor Petrenko (1992 Olympic gold medalist) and I met at a competition, where I beat him completely accidentally. I felt so embarrassed in front of my idol."

6. On the all-important presentation mark:

“I can skate beautifully. While performing on ice I always try to please the audience and to win as well. Being artistic is very important to get the audience on your side. As for a competition, you can't win without strong technical content."

"I'm a wealthy man now. I've got a flat, a car, I have enough money to buy food. I skate to make the people happy. If somebody skates to earn money, I don't care. I skate for the people. Besides, it's pleasant to supply Russia with gold medals."

8. On his adoring public:

"I skate for the fans. It's not as fun without them there supporting me. I get energy from them and I want to skate well for them. They relax me. They make me happy when I skate for them. I feel the Americans like me more and more each time I tour."

"I try not to think about marks, the first place or gold medal. The most important thing is to show what you are capable of on ice. The rest will come on its own."

"What worries me though, is that after all those victories people don't see me as a human being anymore. I am not a machine, I have a heart beating in my chest -not an engine, there's blood in my veins- not oil. I know pain and fatigue. I can lose but I will strive to win everything."

11. On what makes an ideal figure skater:

"This one doesn't exist. The prettiest girl and the best car don't exist as well."

12. On the meaning of figure skating:

"It's everything for me. Without figure skating, I am nothing."

"It doesn't matter what kind of result will be in the end. I already win for myself."

14. On losing the gold medal in Vancouver to a quad-less Evan Lysacek:

"If the Olympic champion doesn't know how to jump quad, I don't know. Now it's not figure skating. Now it's dancing."