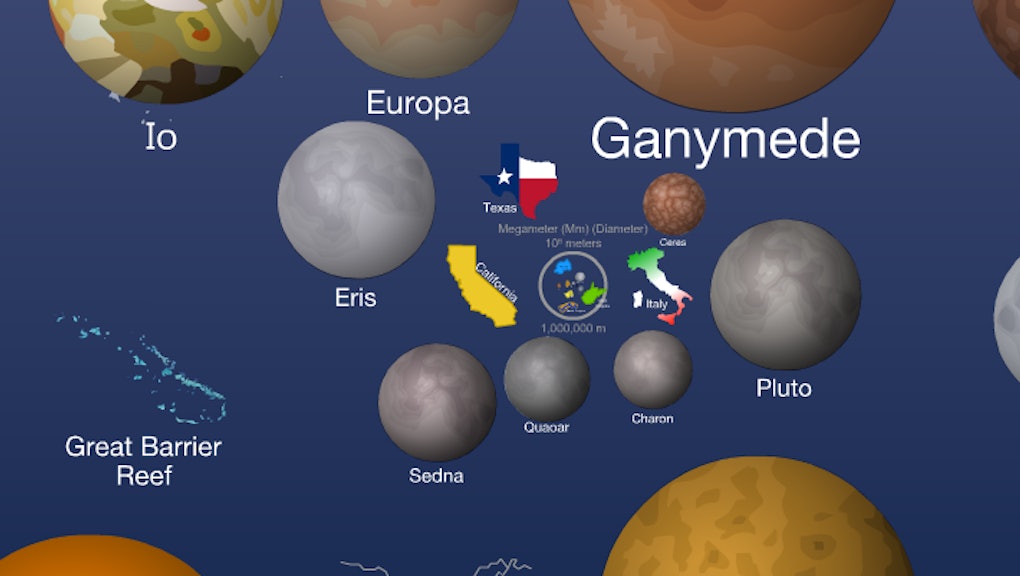 Experience Just How Big the Universe is, in One Mind-Blowing Interactive

You need a more recent version of Adobe Flash Player.

Recently, NASA scientists combined data from the Spitzer and Hubble Space Telescopes to discover the most distant galaxy known to date. The galaxy, named Abell2744 Y1, was formed around 13.2 billion years ago when the universe was extremely young. As the universe is expanding, Abell2744 Y1 is currently closer to 40 billion light years away from us, an astounding distance.

But what does that really mean?

Most of us have trouble visualizing the height of buildings, or the distance it takes to get home from work, let alone things on an intergalactic scale. The above interactive graphic made by 14-year-old Cary Huang may be the best tool to help us understand our place in our vast universe. The interactive piece allows the viewer to zoom through scale and space, from quarks to galactic clusters. The real genius of the interface is the ability to scroll back to a familiar object like a car — the time spent scrolling helps to convey a sense of size and distance.

Even cooler are the tidbits of information that are provided when you click on an object. Below are some highlights from this fantastic hitchhiker's guide:

This is the smallest unit of scale in the universe. How can you have a "smallest length"? In the same way that the speed of light has a physical limit. According to the laws of physics, if two particles were separated by the Planck length or anything less, then it is impossible to actually tell their positions apart. The planck length is thought to be the dividing line where the weird laws of quantum mechanics start to take effect.

As you can see from the animation it takes a bit of zooming to reach this scale. Another way to understand this size: if you were to measure the size of an atom, and count this off in Planck units, one per second, you would be counting for 10,000,000 times the current age of the universe! The Planck scale is theorized to be at the level at which the "foam" of space-time, the hypothetical fabric of the universe, is built.

Fundamental particles such as quarks, neutrinos and the Higgs boson are theoretically point sized. But this creates a problem because point-like objects complicate the laws of physics, creating a paradox because you can get infinitely close to a point, which means the forces acting on it can become infinitely large. String theory proposes to resolve this problem because you can always get closer to one part of the string than another.

Redwood trees are the tallest living organisms known. The tallest one, called Hyperion, is located in Northern California and measures 380 feet. The largest known living thing is actually a fungus, the honey mushroom. The largest example of one in Oregon stretches 3.5 miles long, and extends one meter into the ground.

Tres-4 is the second largest planet discovered so far. It's almost twice the size of Jupiter, and 1,400 light-years away. No telescope can actually observe Tres-4, but it's existence has been proven indirectly. The size of Tres-4 causes its host star to wobble, as well as dim a little when the planet passes by. Strangely, though, Tres-4 is very light for its size. It has only 88% of Jupiter's mass. Last year, an exoplanet eight times the size of Jupiter was discovered.

Voyager 1 which was launched in 1977 to study the Solar System has been operating for over 36 years, and is now 127 Astronomical Units (distance between the Earth and the Sun) away. Last year NASA announced it had reached interstellar space (meaning it is now outside the boundary of solar wind), making it the furthest a man-made object has travelled.

Structure exists on nearly all scales in the universe. Matter clumps under its own gravity into planets, stars, galaxies, clusters, and superclusters. Until recently, the Sloan Great Wall is the largest known structure in the universe, consisting of a giant filament (or wall) of galaxies, 1.4 billion light years across. Last year, astronomers discovered a larger structure — a large quasar group measuring 4 billion light years across.

This is far as anything on Earth can see. The age of the universe is 14 billion years, so in theory we are unable to observe anything further than 14 billion light-years away. Due to the expansion of space, these objects are now around 46 billion light years away — the limit of the observable universe.