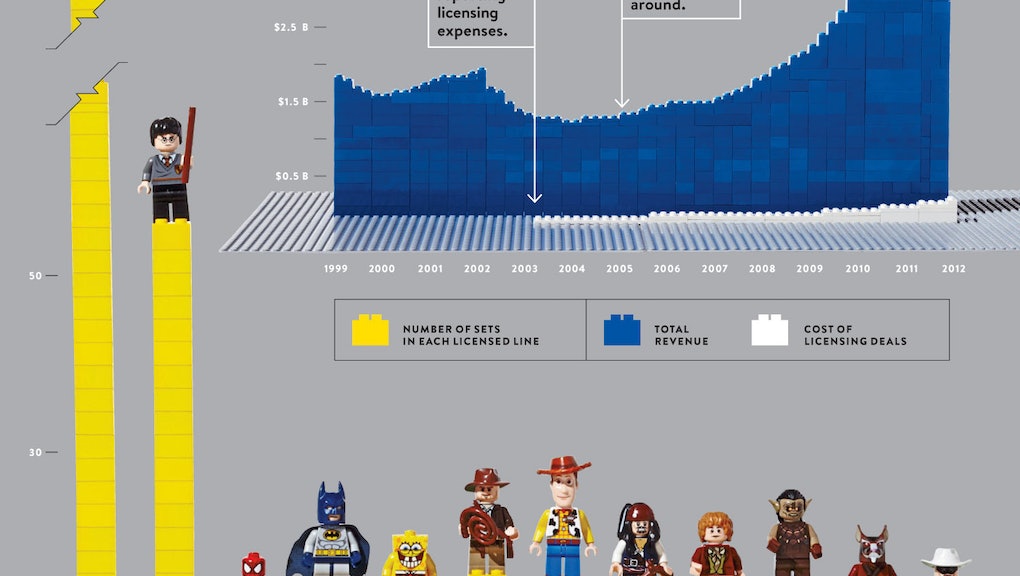 The Winning Economic Strategy of Lego, in One Colorful Chart

This fascinating graph from Todd Tankersley and Wired shows how much Lego has rebounded from a crash at the beginning of the millennium. And the company's success is rooted in a distinct strategy.

In 2002, Lego's revenues collapsed from nearly $2 billion and continued a downslide to under $1.5 billion by 2004. Today, Lego is the second most profitable toymaker in the world (behind only to Mattel, after surpassing Hasbro) with revenues approaching $4.5 billion. Lego has seen 70% growth in the major emerging market of China over the past year, with over 80,000 registered fans throughout Asia. And because Legos are so high-quality, according to SmithStreet analyst James Button, "the more affordable knockoffs serve as an 'entry point' to playing with Lego-style bricks, from which a family might later upgrade to the real thing" (paraphrased).

Key to the company's success: Licensing deals, as seen above.

While historically Legos were an imagination-building exercise (the earliest Legos, or the ones you remember from your childhood, largely being just sets of bricks), now the company is leaning towards major deals with movie studios and other brands to haul bricks. As the Washington Post's Know More explains, Lego "has gradually supplied more and more of the narrative context for play that children once had to invent themselves."

Apparently children enjoy making their own Batman or Star Wars story than inventing one from scratch. This is good for the company, but skeptical onlookers like art critic Philip Kennicot think it's stifling creativity. Kennicot says that Lego is no longer about giving kids a toolbox to build a world with, but instead is becoming "commercialized play that encourages a nexus of pre-packaged narrative and consumerist desire in kids whose imaginations should be given more scope and freedom."