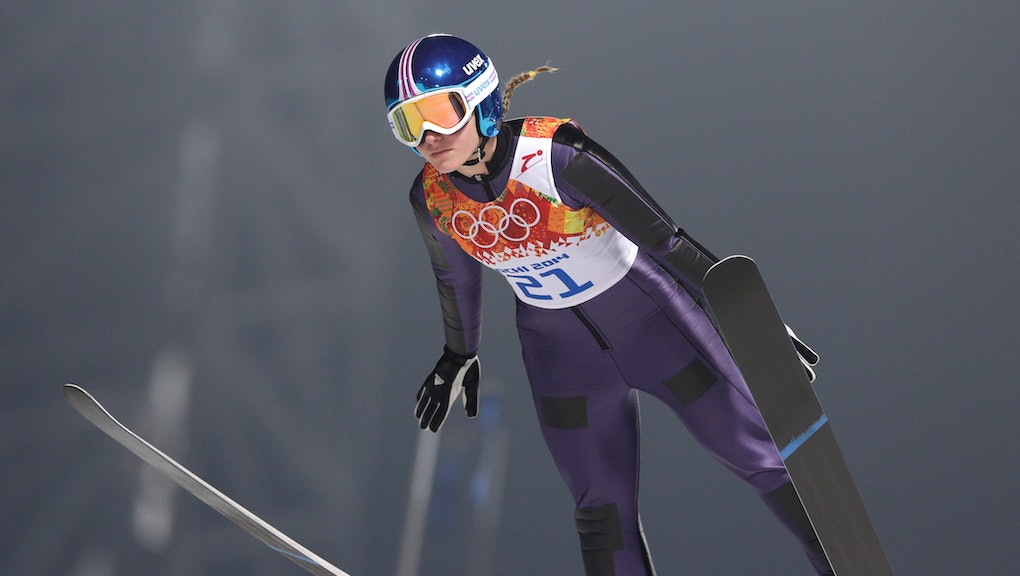 While the Sochi games are crowded with perennial favorites — figure skating, snowboarding, speed skating — there was one particular sport that made history: women's ski jumping.

Although ski jumping is one of the first winter Olympic sports, appearing since the inaugural 1924 Winter Games, it has not been open for female competition — until Tuesday.

The fight has been long and hard for female ski jumpers, who have wrestled with the International Olympic Committee (IOC) for years for their right to compete. The IOC granted its assent in 2011, but only after years of insinuating that the sport would damage women's reproductive organs, and that there weren't enough qualified female jumpers to merit an official competition.

The claim was clearly false, as female athletes have been rocking ski jumping for years. After the 2009 Ski Jumping World Championships finally allowed women to compete, Lindsey Van clinched the gold, becoming the first American (male or female) to do so. She was then shut out of the 2010 Vancouver Games, despite the fact that she held the highest hill record in Vancouver at 105.5 meters (again, for both male and female).

Van and 14 other female ski jumpers sued the Vancouver Games, and though they lost the case, the IOC finally relented and agreed to open a women's competition in Sochi. And the historic day finally came yesterday. Van, along with Sarah Hendrickson and Jessica Jerome represented the U.S., competing with 27 other female athletes from 11 countries.

"I think ski jumping was just traditional and male-dominated and they didn’t want women coming to the party," Van said before going to Sochi.

Unfortunately, the women of Team USA did not medal at the event — the history-making honors went instead to Germany's Carina Vogt, Austria's Daniela Iraschko-Stolz and France's Coline Mattel. Iraschko-Stolz also made waves by becoming the first openly gay athlete to medal at Sochi. Check out the amazing photo below:

Of course, not everyone was excited about this progressive moment. Russian men's ski jump coach Alexander Arefyev has made it pretty clear in interviews that he believes women have no place in the sport: "It's a pretty difficult sport with a high risk of injury. If a man gets a serious injury, it's still not fatal, but for women it could end much more seriously," he said.

Just in case the sexist subtext was unclear, he added this gem: "Women have another purpose — to have children, to do housework, to create hearth and home."

But this allegation that ski jumping is dangerous for women has been found to be grounded in sexist pseudo-science, and nothing more. Despite repeated claims that injuries from ski jumping may lead to infertility and premature aging, it's been shown that women may in fact be more biologically suited for the sport (their size and weight allow them to be light projectiles). Some evidence shows that women might be more susceptible to ACL and knee injury, but as of now, there haven't been enough studies to substantiate the idea.

For now, the women are planning on letting their success speak for themselves.

"We just wanted to be recognized as athletes who ski jump and not like some sort of freak show out there doing something that was so crazy and weird and told to go away," said Van. "It wasn't that we wanted the fan base or the exposure. We just wanted to be accepted."

The fight has been unfairly and ridiculously long, but it was inspiring to watch these badass women finally take to the Olympic stage and fly high. We wish congratulations to all the athletes, and hope to see them again at the next Games: