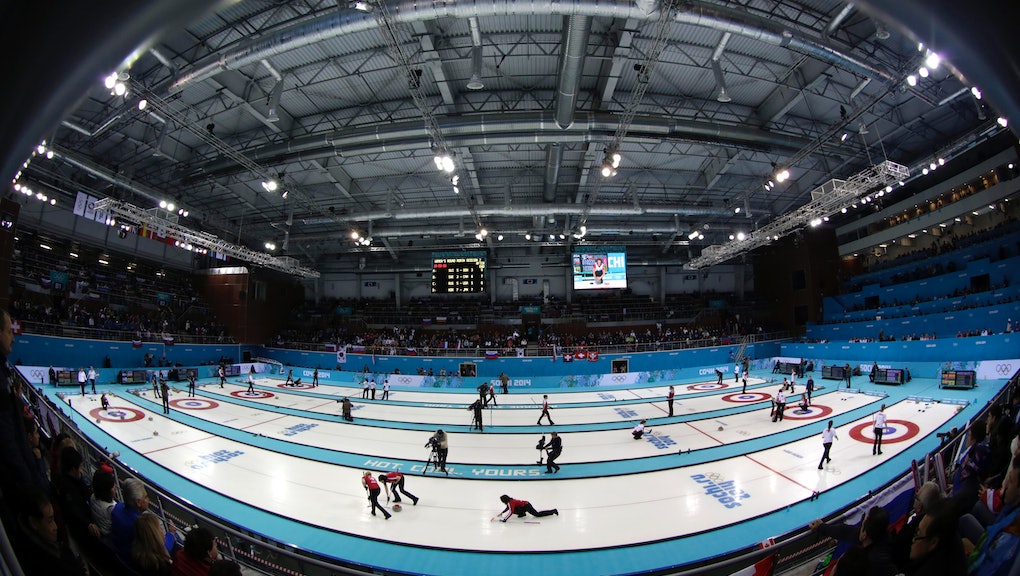 Here's Everything You Ever Wanted to Know About Curling

For most people, the sport of curling is still new and possibly a little confusing.  But curling is growing fast – and poised to be a breakout sport at the 2014 Winter Olympics in Sochi, Russia.  NBC is provide wall-to-wall coverage of the curling competition at the Olympics – on TV and online - giving even casual fans of all kinds an incredible opportunity to watch and enjoy curling like never before.

What do you need to know to enjoy curling… and hold your own in conversation with your friends?

- Curling is played on a long, narrow sheet of ice with a marked target area, called the house, at each end.

- Two teams, each with four players, take turns sliding 42-pound granite stones to the far side of the ice sheet. The objective is to get your stones closest to the center button of the house.

- Players vigorously sweep the ice in front of the stone to keep it moving. The friction caused by the sweeping polishes the ice briefly, which makes the stones travel farther and straighter.

- Each curling match is divided into ten ends. Each end includes both teams delivering all of its stones (eight stones per team). A team receives one point for each stone that is within the house and is closer to the button (center of the target area at the end of the sheet) than any of the opposition’s stones. Additional points are scored by other stones in the house that belong to the same team, at one point per stone.

- Only one team can score points in an end.  The team with the most points after the tenth end is the winner.

WHAT EXACTLY IS HAPPENING ON EACH SHOT?

Before the shot: The person delivering the shot steps up to the hack, the foothold located behind the house that is used to push off, and looks to the far end of the sheet for instructions. Another player, usually the skip (captain), communicates the type of shot that should be used and the distance it should travel with a series of hand and arm movements, and uses a broom to mark the shot where the shooter should aim.

Delivery: From a kneeling position, with a foot flat on the ice, the player with the stone begins a shot by sliding forward and releasing the stone.  Not only do they have to keep their balance as they slide, they have to remember to let the stone go before it crosses the first of a series of painted lines (in this case, the hog line). The player delivering the stone gives it a slight spin upon release (the spin allows the stone to travel in a curved path, or curl, as it approaches the house), depending on which direction they want it to travel. With the stone now in play, the rest of the team begins working to get it as close to the target as possible.

Sweeping: The primary method to assist a stone’s movement down the curling sheet is sweeping in front of its path. Players may not make contact with the stone, but they can clear the ice in front of the stone to enable smooth movement.

Yelling: As the stone moves down the ice, the skip often yells to communicate how the sweepers should help to influence the shot. Some common calls made by the skip include:  Hurry (sweep as fast as you can), Hurry Hard (sweep as fast as you can, with downward pressure), and Clean (keep a broom down on the ice, without applying much pressure, to clear away anything that could disrupt the movement of the stone).

Last Stone Advantage: Teams take turns throwing stones one at a time, which means the team that goes second also gets to throw the last stone, or control the hammer. Controlling the hammer is the most common way to score points because of the ability to knock out other stones. This is why the team with the hammer is often described as having “last stone advantage.” If a team has the hammer, it will try to keep the house clear of stones so as to have access to the button area at all times and finish an end in position to score points. If a team does not have the hammer in an end, it may try to clog up the house to deny the opposing team access to the button.

Watch the clock: Time clocks are used to control the speed of the games, and prevent a team from taking enormous amounts of time to execute its shots. Each team has 73 minutes (146 minutes total) to complete a ten end game. Each team may call one 60-second timeout during a game and one 60-second time-out in each extra end, if needed. If a team runs out of time, it loses the game.

Sportsmanship: Sportsmanship is a big part of the culture of curling. There is no trash talking. Players always shake hands, and curlers say “good shot” (or similar) to their opponents when appropriate. And tradition dictates that competitors share a beer after a match. It is genuine, not gamesmanship.

The curling competition at the 2014 Winter Olympics begins on Monday, February 10th.

The biggest challenge if you want to watch the matches will be the nine-hour time difference between the United States (New York) and Sochi, Russia.  Most/all of the Team USA curling matches will be shown live on CNBC.  CNBC will present a daily curling program (Feb. 10-21, from 5-8pm ET, except for Sunday, Feb. 16, when coverage will air from 4-7) – including 36 hours of curling action.  And NBC will broadcast ALL of the Olympic events, as they happen, on NBCOlympics.com.

- The exact origins of curling are unknown, but the sport is believed to date back as far as the 1500s. Today, there are roughly 1.3 million curlers around the globe – two thirds of whom are in Canada.

- Canadian and Scandinavian teams have dominated Olympic curling. The bronze medal won by the USA men's team in 2006, the country’s only Olympic curling medal to-date, marked the first time a team other than Canada or a European country medaled in the event.

- Craig Brown, the US men’s team alternate, and Erika Brown, the skip of the US Women’s team, are siblings - and part of what some call the first family of curling. Their father, Steve Brown, is a legendary curler with multiple national titles, and is now the National Wheelchair Curling Team Development Coach.

- Both John Shuster and Erika Brown, the Team USA men’s and women’s skips respectively, are both making their third appearance in the Olympics.

- Vernon Davis of the San Francisco 49ers is an honorary member of Team USA.

- China and Japan qualified to curl in the Olympics for the first time this year.

- The skip of Sweden’s men’s team is known as ‘The John McEnroe of Curling” due to his fondness for using profanity on the ice.

- And, you won’t want to miss the Norwegian Curling team’s pants.

For more information about curling, visit www.HitTheBroom.com and download the casual fan’s guide to curling.