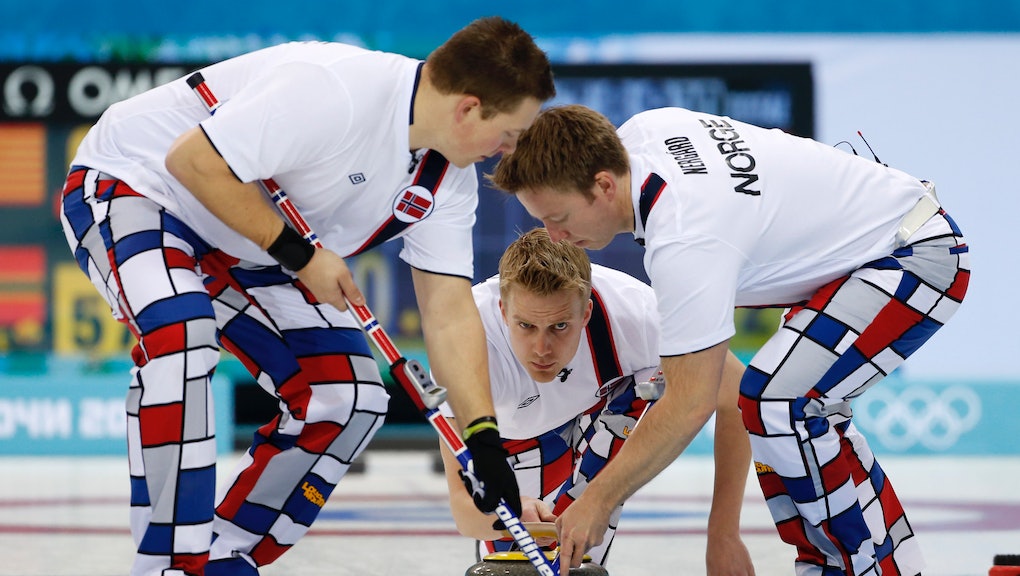 Are the Norwegian Men's Curling Pants Against IOC Rules?

The Norwegian Men's Curling Team is known for wearing crazy pants — so it surprised nobody when their choice for the 2014 Winter Olympics generated a lot of attention among the media.

Are the pants just a fun fashion statement, or does it give the Norwegians an unfair advantage? And are the crazy pants even legal?

International curling rules require "All team members [to] wear identical uniforms and appropriate footwear when accessing the field of play for games or practice sessions" and state that "the colour of these garments shall be registered with the WCF prior to the start of each competition." But, there are no specific details about uniform pants.

There are detailed rules about the shirts worn by curling competitors, including:

Each shirt and jacket/sweater has the player's surname, in 5.08 cm. (2-in.) or larger letters, across the upper back of the garment, and the name under which their Association/Federation competes, in 5.08 cm. (2-in.) or larger letters, across the back above the waist. If desired, a national emblem may also be worn on the back, but only in addition to the name under which the Association/Federation competes, and displayed between that name and the player’s surname. When two or more team members have the same surname, the first letter(s) of their given names are also displayed.

There is even a note that shirts can be tucked in or out during play — but no specific notes in the rules about team uniform pants.

And in the World Curling Federation dress code, you can provide details about socks ("If worn under the pants, no restrictions"), belts ("If showing, all the same"), kilts ("Solid colour, same colour of tights, can be a team mixture of kilts and pants") hooded jackets ("Hood cannot be showing, rolled up or tucked inside") and much more. But, alas, nothing specifically regulating uniform pants.

Neither the IOC nor the World Curling Federation have responded to our requests for a ruling on the legality of the pants. And there is no word of an official protest being filed against the Norwegian team for its uniform design — only this, an article suggesting that the IOC considers the pants an "unofficial" part of Team Norway's Winter Olympics uniforms.

The official response from the Norwegian Men's Curling team ... apparently is this: a photograph of the guys in Sochi with no pants