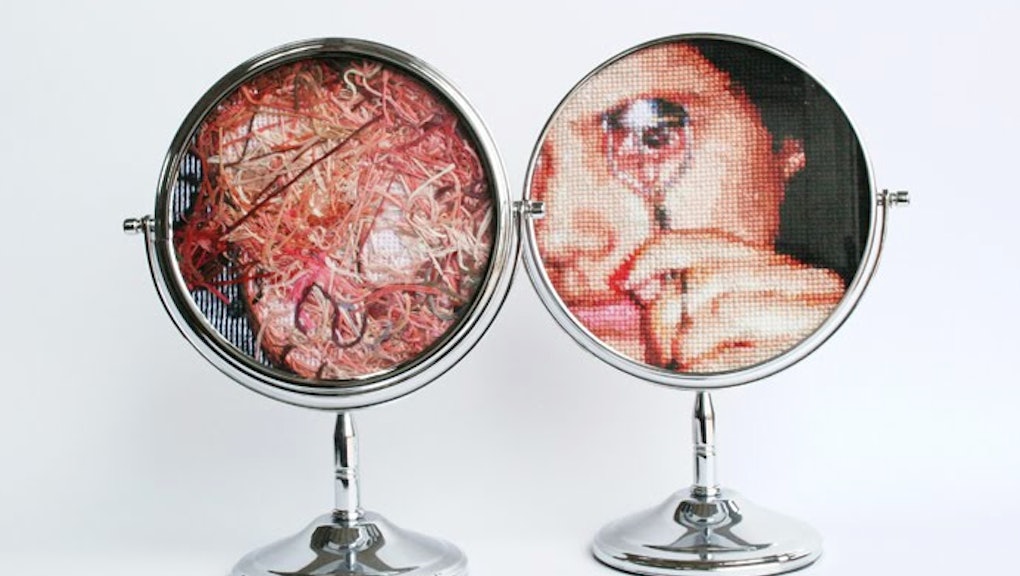 Fiber work, which features sewing, stitching, quilting and knitting, has typically been considered more a craft than an art. Given their implications of domesticity, these media traditionally have also been the domain of women. But a new group of female artists is changing all that. They're reclaiming fiber art as a beautiful, radical feminist statement about "women's work."

This embracing of fibers by female artists is telling. As women, these artists simultaneously acknowledge and reject the connotations of these media. This re-evaluation of "women's work" is happening internationally, which indicates a seismic shift in the way young women understand their identity.

PolicyMic spoke with artists Lauren Salazar, Ana Barbosa Teresa Gubo and Susanna Bauer about their work and inspiration. Welcome to a new kind of feminism.

I first saw Lauren Salazar's work while visiting her studio at the University of North Carolina at Chapel Hill. She was an MFA student then, working on the above piece in a tiny upstairs workspace in the art building. The cottlin (a type of yarn) installation is majestic in pictures, but even more powerful in person.

When asked in a recent interview about the feminine connotations of using yarn in her artwork, Salazar wrote in an email, "What I, idealistically, am trying to show in my work is that the polarizing categorizes of fiber/painting, craft/fine art, contemporary/tradition, male/female are not very different from one another at all (at least in my eyes)." These tensions are all central to  her work, and this understanding of a shared experience is critical.

"If I'm challenging anything it would be the masculine, and the readily accepted mediums and practices of fine art — like painting and sculpture.  And I'm saying that the feminine, even the traditional, has always been just as complicated, interesting, and aesthetically beautiful."

In this piece, Salazar blurs the boundary between high art and craft, between conceptual and physical, and between male and female art forms. As she blurs the boundaries, she rejects the status quo.

Ana Teresa Barbosa Gubo, a Peruvian artist, is challenging those ideas even more aggressively. With her beautiful embroidery of women sewing themselves up and ripping themselves open or interacting with symbolic animals, she is directly addressing the feminine element of her work in a way that is both bold and vulnerable.

Where Salazar's work is a re-framing of traditional ideas of femininity, Barbosa Gubo's are a rejection. Gubo's work is often uncomfortable, even painful to view. From stitched images of women putting on makeup to embroidered photographs of women sewing themselves closed, her work expresses romantic and sexual issues from a female perspective.

Every piece challenges the links between the feminine identity and these media, indicating their ties are troubled, dense and intrinsically sexual as women would have taken up these crafts as wives, mothers and homemakers. In a way, her use of these media are defiant.

Susanna Bauer, an English artist by way of Germany, emphasizes the natural and decorative aspects of fiber. Her work is exquisite, delicate, crafted and ephemeral. The above piece, which is part of her Trans-Plant series, showcases her command of needlework and her appreciation for nature. It is almost romantic.

"Appropriating traditional craft techniques like weaving and crochet as a means of sculpture brings a contemplative element to the development of my work," Bauer says.

In a description of her work, Bauer said, "Appropriating traditional craft techniques like weaving and crochet as a means of sculpture brings a contemplative element to the development of my work. I am interested in unusual combinations of materials, the experimentation with fragility and strength and the individual stories that evolve and shape themselves in the process of making."

Her work is less obviously feminist than the others, however, it is decidedly feminine. Her work embraces needlework as decoration and enhancement, showing just how effectively these female crafts can elevate the essential.