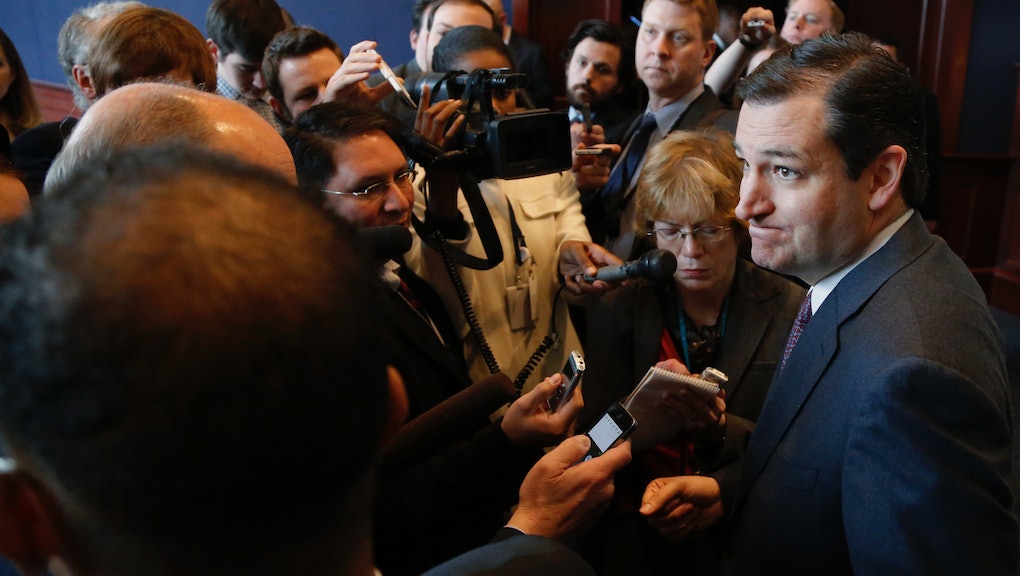 Tea Party favorite Senator Ted Cruz is back in the news for his announcement that he will not allow for a clean bill to raise the debt ceiling when the Senate votes Wednesday. Although House Republicans sided with Democrats on Tuesday to increase the debt ceiling limit with zero debt-reduction provisions, Cruz seems to be unwavering.

“Under no circumstances will I agree to the Senate’s raising the debt ceiling with just 50 votes. I intend to object and force a 60-vote threshold,” Cruz said.

This could mean another Cruz filibuster. If Cruz does succeed in stalling the limit increase, we may default on loan payments owed to citizens, companies and other countries. The senator's obstructionist tendencies however are just one reason progressives are horrified. Here are 5 more.

1. He's an immigrant, but he wants to make citizenship harder for others

Despite being an immigrant himself, Cruz has rallied against liberal immigration reform. In a reform plan proposed last year, Cruz added an amendment that would block citizenship for undocumented immigrants.

2. He supports the Keystone Pipeline XL

Cruz wants the President to move forward with the Keystone Pipeline XL — and he thinks progressives should support it too. At a recent Heritage Action Conservative Policy summit, Cruz said, "If you’re a Birkenstock-wearing, tree-hugging Greenpeace activist, you should love the Keystone pipeline."

3. He believes in states' rights — but not for marijuana

Cruz thinks same-sex marriage should be decided at the state level and education decisions are best left for municipalities. But when it comes to marijuana policy, Cruz wants the Department of Justice to interfere with Colorado and Washington's now legal marijuana businesses.

Cruz continued to support part of a controversial Texas abortion law even after a federal court declared it unconstitutional. The law required doctors performing abortions to have admitting privileges at nearby hospitals and was framed as a way to protect women's health.

Cruz has also made the ranks of politicians who have said embarrassingly ignorant things about birth control: In a speech at the 2013 Values Voter Summit, Cruz misleadingly claimed that Obamacare requires Christian businesses to fund abortion-inducing birth control. According to the New York Times, "the politically charged debate over morning-after pills and abortion...is probably rooted in outdated or incorrect scientific guesses about how the pills work."

It would be one thing if Cruz were a political dinosaur on his way out of office. But he's immensely popular among tea partiers, who, in a recent poll, voted him as their favorite politician.