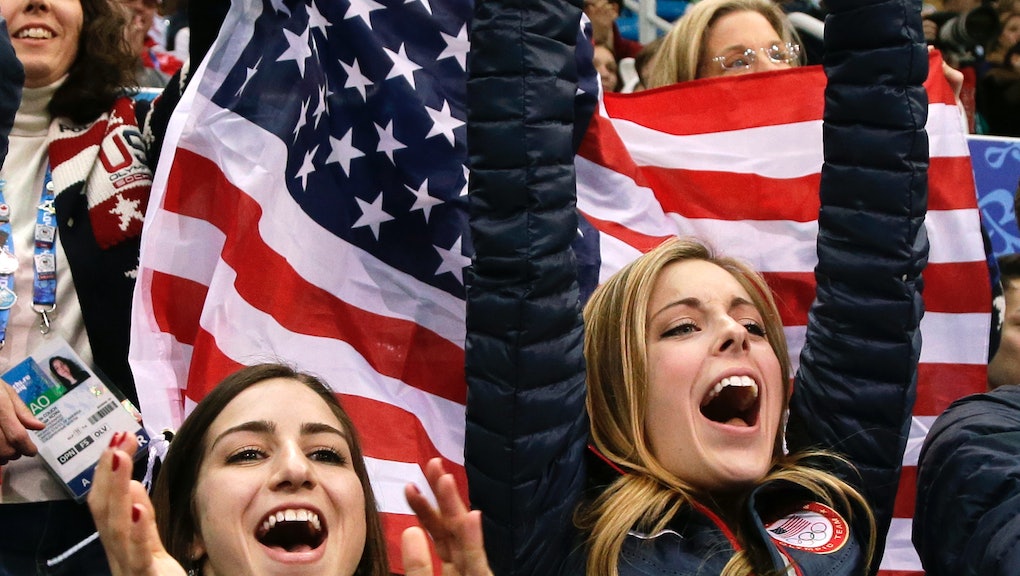 How Did the U-S-A Chant Start? Here's the History Behind America's Greatest Sports Anthem

At any international sporting event, you are bound to find the Americans chanting an obnoxious yet infectious chant: "U-S-A! U-S-A!"

While the cheer is now a staple in American athletic competitions, its origins are more obscure. To trace the beginnings of the chant, we need to go back to the '70s.

As this 2011 Slate piece points out, it's hard to track down the exact beginnings of the "U-S-A!" cheer. Reports of the chant go back to the mid-'70s, although it's possible that journalists simply did not chronicle it before then. Slate points to the 1975 National Association of Intercollegiate Athletics swimming championships, when the crowd reportedly used the cheer to protest the Canadian team's inclusion in the competition (making a surely less than cheerful use of it).

By the time the 1976 Winter Olympics in Innsbruck, Austria, rolled around, it seems that the cheer became somewhat commonplace:

A victory against the Finnish ice hockey team was spurred on by "a crowd of 4,500 chanting 'USA, USA,'" according to this AP piece. But the truly iconic chanting moment took place four years later in home court: Lake Placid, New York.

The 1980 Winter Olympics is famous for the "Miracle On Ice" game, when the ragtag American team beat the reigning four-time champion, the Soviet Union. The shocking, unexpected 4-3 victory led to an ecstatic cheer by the overwhelmingly American crowd:

The U.S. went on to win the gold in the competition, with the Soviets taking silver. But perhaps more importantly than the actual medal, an iconic moment of American patriotism was born. While it may have been used in earlier years, the "U-S-A!" chant became cemented as a watershed moment in American history, and has been used since then not only to express enthusiasm at athletic events, but also to express national pride.

To see the impact of this cheer, check out this moving, 72,000 person rendition at the tenth anniversary of 9/11 at a Texans vs. Colts game (chant starts around the 2:30 mark):