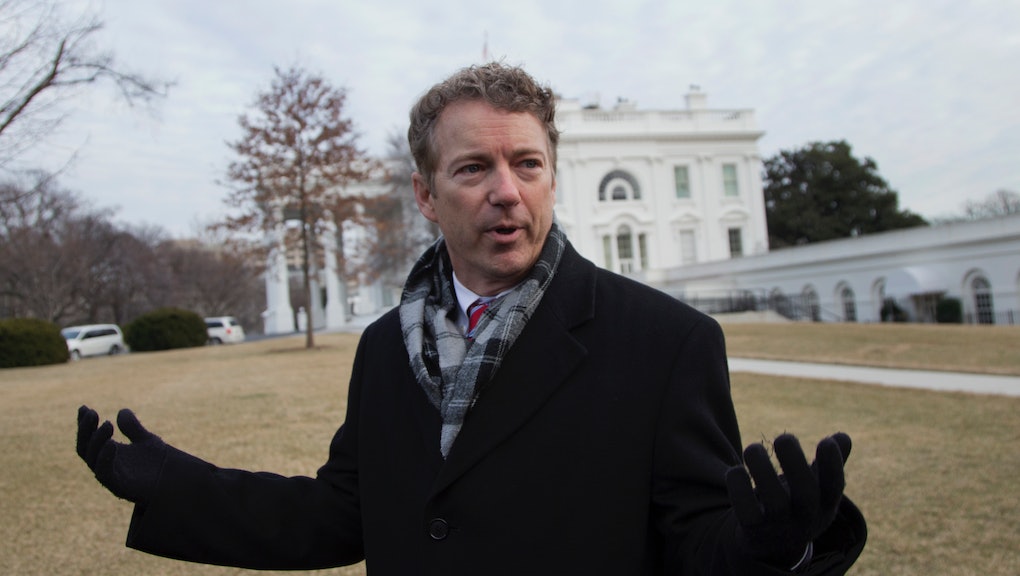 Big news: Kentucky Sen. Rand Paul (R) announced Tuesday that he will be filing a class-action lawsuit against President Barack Obama and his administration over extensive surveillance programs being run by the National Security Agency (NSA).

But why a lawsuit? In the announcement, Paul said: "I am filing a lawsuit against President Barack Obama because he has publicly refused to stop a clear and continuing violation of the 4th Amendment. The Bill of Rights protects all citizens from general warrants. I expect this case to go all the way to the Supreme Court and I predict the American people will win."

In an opinion piece published on CNN the same day, the trio said their suit saw to demonstrate "that the blanket collection of Americans' telephone metadata without reasonable cause violates the Fourth Amendment of the US Constitution" and gain assurance "that these programs be halted immediately and that all previously collected data be purged from government databases."

"It's time to hold government officials accountable for their habitual trampling on the Constitution and on our rights as individuals. Our case will be an important step down the road of restoring our Constitution and reining in our own overreaching federal government," Paul and the others concluded in the op-ed.

Does Paul really hate the NSA that much? In an interview with POLITICO, Paul said that "I'm not against the NSA, I'm not against spying, I’m not against looking at phone records. I just want you to go to a judge, have an individual’s name and [get] a warrant. That’s what the Fourth Amendment says."

What happens next? Paul's move is sure to invigorate opponents of the NSA, though his choice of the far-right Cuccinelli to argue the case before the court may confound liberal critics of surveillance programs. The libertarian-leaning senator also appears to be using his criticisms of the Obama administration's targeted drone assassination and surveillance programs to bolster his 2016 electoral chances. POLITICO notes that "potential class-action signatories [are being directed] to websites including RandPAC.com and to his Facebook page, which sent visitors to RandPaul2016.com," as well as the newly-established Defendthe4th.com. Anyone who signs up on those sites will be enrolled into his campaign databases. Paul has recently been seen at meet-and-greets with potential voters in Iowa, New Hampshire, and South Carolina, all important Republican primary states.