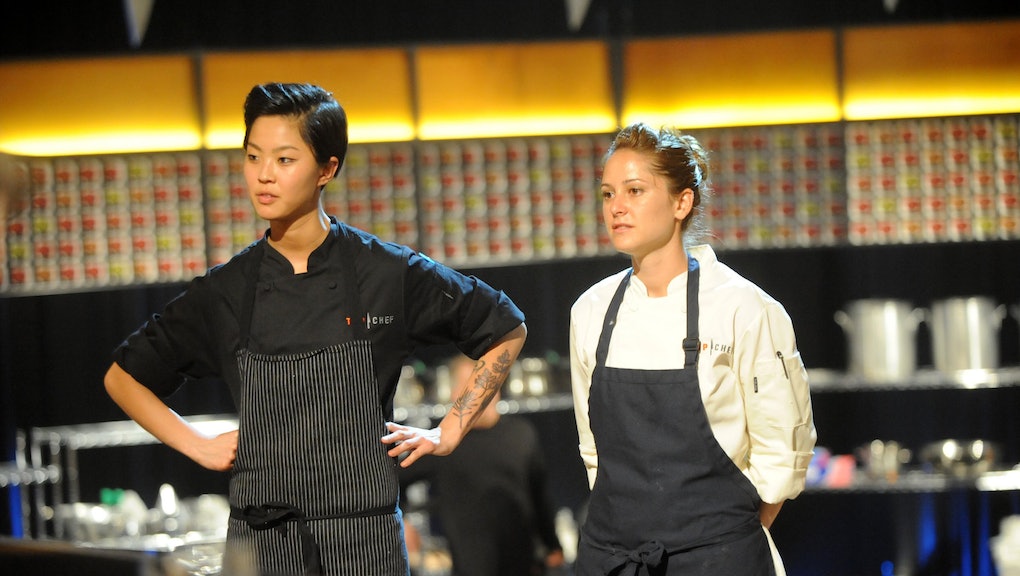 Reality TV Has Sparked a Remarkable Job Boom in America

When you've spent your whole life watching reality television like I have, it's hard not to get swept up in the fantasy of easy fame. No matter how many times you watch Chopped and tell yourself, "Ack! It's just entertainment!" there will always be a small part of you that thinks, "I could totally do that."

The problem is shows like Chopped influence our generation in ways far beyond a silly internal debate. Just look at the numbers: The Culinary Institute of America, one of the largest culinary schools in the country, told Eater its enrollment has doubled since The Food Network launched 20 years ago. These changes in numbers aren't necessarily a good thing for the industries or the individuals.

The influence of reality TV on career choices is hardly relegated to the culinary world. Project Runway helped transform Parsons The New School for Design from a fledgling design program into the country's largest fashion school; enrollment increased from about 200 students to over 1,000 after the year 2000. The same goes for jobs like hair styling (Shear Genius) and movie makeup (Face/Off) that have made their way to the small screen. In 2010 and 2011, the Association of Private Sector Colleges & Universities reported that U.S. trade schools were expanding at a rate of 20% per year.

Many of these student are not signing up for school in droves because they purely want to learn the art of mise en place or cut on the bias. Not entirely. In many instances they are tossing away more traditional educational concerns for the televised lure of wealth and fame. The speculation here is that many students don't seem to care about job security, or 401Ks, or even a starting salary when making their decision. They only seem to care about how cool it looks on TV, and TV definitely makes it look pretty cool.

When Amanda Catrini moved to New York after college to follow her dream of becoming an actress, she did what generations of struggling artists had done before her: she took a job as a waitress. But she soon found herself in the kitchen, where a chef introduced her to the culinary arts. "I had been a fan of The Food Network" the 26-year-old said in an interview. "I was getting tired of auditioning and wanted to change my life's path." So she switched gears and enrolled in the French Culinary Institute (FCI, now the International Culinary Center). She had a dream of combining her passion for acting with her passion for food. But she didn't have plans to go back in the kitchen after graduating. She, like many of her classmates, wanted to work in TV.

"A lot of kids coming out of culinary school want to get on [The Food Network's] Chopped or have their tweezers out in the kitchen," Chef Andy Ricker recently lamented to food blog Grub Street. "You have filing clerks who decide they want to be chefs; they take their savings, go through a yearlong program, and then expect to come out and work as a sous chef. I worked as a dishwasher for two years before I ever touched any food.”

Jennifer Minniti, the chair of the Fashion Design Department at Pratt Institute, seems to agree that this trend is a major problem. "[Because of] the proliferation of reality TV shows around fashion … you get a lot of students who just want to participate in this program because they want to be on TV or be a celebrity," she told the Fashionista in 2012. "This is a tough business."

But even worse than these disillusioned students? Career retention. Celebrity chef David Chang, of Momofuku fame, purports that more than 50% of culinary school students are no longer working in restaurants five years after graduating.

The thing is reality TV, and its influence, is not going anywhere anytime soon. In fact it is just the most recent form of media to influence impressionable high school students. Before Top Chef, culinary kids were likely glued to Julia Child, or were busy modeling themselves on Audrey Hepburn in Sabrina.

Being a celebrity chef or designer aren't the only ways to pursue careers in these fields. Perhaps teacher should be helping students to visualize a Plan B that pays student loans while still pursuing the field. Maybe schools could stop trying to fight the lure of reality TV and start offering more courses that feed the TV machine in a productive way — say, "Food Styling 101" or "Lighting for Fashion Design" — while still providing a base education in their field.

Though Amanda Catrini admits that FCI was "much tougher than I had anticipated" and that her instructors "did not consider food media careers to be a very realistic option after graduating," she managed to score a job as an assistant purchaser of The Food Network's test kitchens only a year after graduation. "I am so thrilled to be working in The Food Network test kitchens every day," she admits. "I wanted this very badly."

Ultimately, Catrini says she's glad she chose this path, even if her career isn't exactly how she pictured it. "[My] work doesn't seem glamorous like it is on TV," she admits. "Because it's not TV. It's my day-to-day."