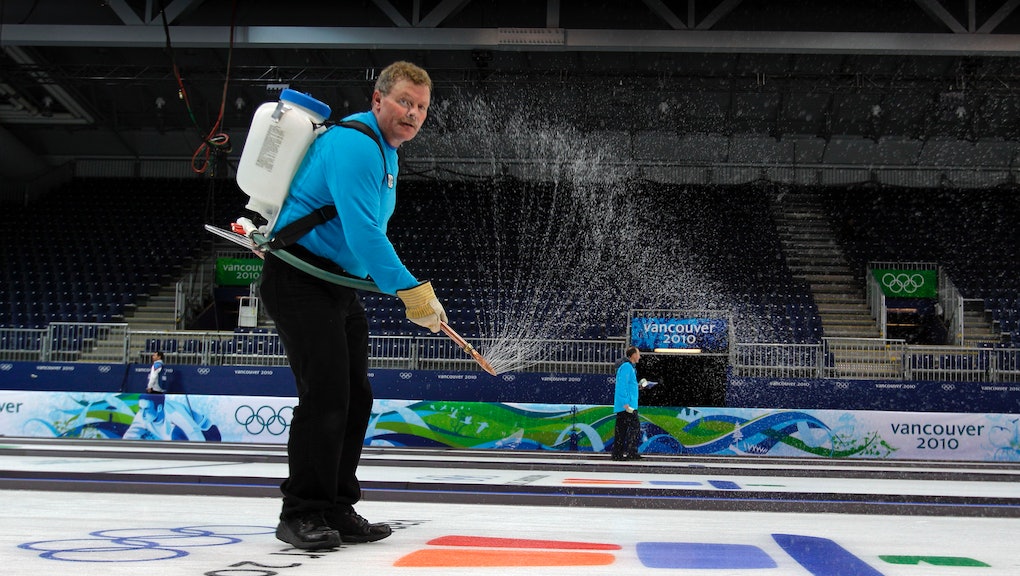 What is so special about the ice used during a curling match? Quite a bit it turns out.  During the U.S. Olympics Trials in Fargo last November, I spoke with the head ice technician about what goes into preparing the ice for curling.

Here are some excerpts from our conversation:

Q: What are the ice preparations specific for curling?

Hockey ice is not level. It can be as much as 2.5 inches out of level from one end of the sheet to the other. The corners are usually high because they add more water to the corners. If the ice is too high we need to grind it down. If it’s too low we need to add water. Any ice that is 17/1000th off will stop a stone from curling. Any time ice isn’t level it will throw that stone off, or make it curl a bunch.

NOTE: An article in Chemical and Engineering News notes: "The icy sweet spot [for curling] is at −4.5 °C ... Just half a degree warmer or colder, and play deteriorates."

Q: How do you pebble?

You need equal distribution of pebble over the ice surface, from one end to the other.  Walking backwards, from back line to back line takes about 40 seconds of time, and you want 77-80 strokes (left to right). You have to go fairly fast at two strokes per second.  You walk backwards because if you stepped on the pebble there won’t be pebble where you are stepping, and it’s so slippery you would almost certainly fall.

After you pebble, you nip the ice — use a blade to scrape an ounce or two off the top (NOTE: to ensure you scrape the right amount, you gather those scrapings up, melt it and measure it.) Then you run a mop to pick up any fine things that would get in between the pebbles.

Q: What role do ice conditions play in competition?

Good ice is fair ice. That’s why we nip. Mop it up. Run stones. We know we can warm that surface up a bit so the first team practicing doesn’t have a disadvantage over the second team practicing. If a player knows that the ice is set up well it opens up the game, gives a team more options.

For example, if you know that you can curl a stone five feet, then you feel confident you can deliver a shout a round a guard. If you have three feet or less of curl, it will be much more difficult to get to a stone at the tee-line, because there isn’t enough curl. If you have five feet of curl you can miss the guard stone and still hide your stone behind it. If you only have three feet of curl that stone will stick out and be an easier target for the other team. The ice conditions will influence how a team can play the game.

Q: Does the ice change during the course of a match?

It shouldn’t. We watch most of the game — we have sensors in the ice that send temperature readings to a computer in the back room, so we know the temperature at all times, and whether it’s trending up or down. You can’t stop a game unless both skips decide that the ice is unplayable. If both skips decide it’s an issue they can go, together, and ask the official to correct the problem.

For more information about ice conditions, or curling in general, visit www.HitTheBroom.com