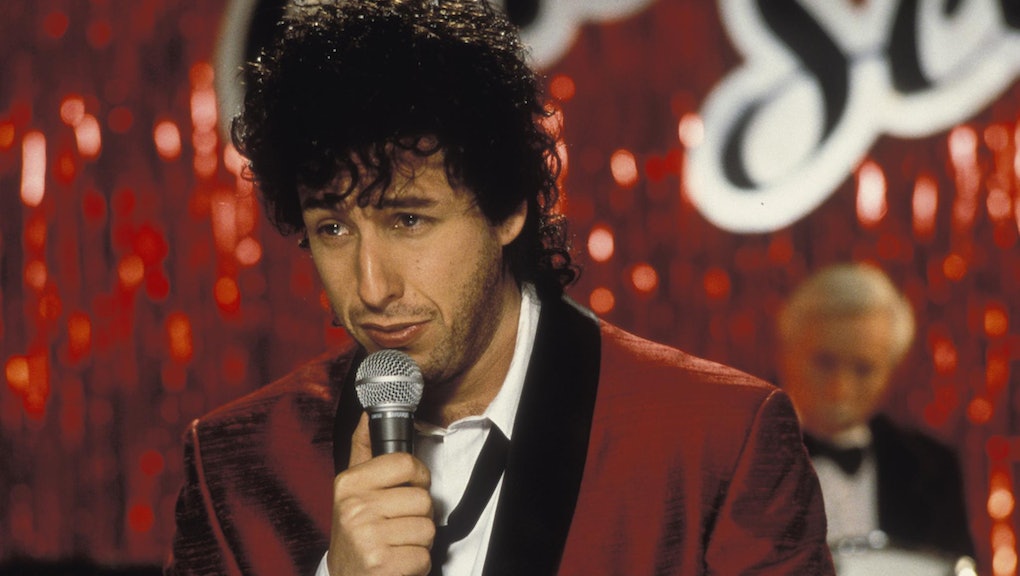 9 "Love Songs" That Don't Mean What You Think They Mean

My childhood was spent watching TV shows broken up with ads for "101 Classic Love Song" anthologies. Days of my life were probably spent watching clips of Cyndi Lauper, Bonnie Tyler and Sinead O'Connor weep through the high notes of their greatest songs in between episodes of Budgie the Little Helicopter.

Even then, I found the fact that nearly every video was grey, sullen and tear-stained a little bit weird. So many of our greatest "love" songs are full of heartbreak, angst and self-loathing.

Lest your date get the wrong impression this Valentine's Day, make sure you don't serenade your significant other with any of these nine songs that aren't quite as lovely as you think. Keep them off your mixtapes. Just read, listen and learn.

1. "Total Eclipse of the Heart"

Is it happy? Is it sad? Is it about as coherent as "Leave Britney Alone"? We will never know the answer, because Bonnie Tyler's magnum opus makes no damn sense whatsoever — which may, in fact, be why so many people think it's a beautiful love song. After all, who doesn't want to feel like "we're living in a powder keg and giving off sparks"?

Well, maybe everybody. I don't know. It sounds romantic, but then it also sounds like the sort of thing you'd hear from ranting, drunken lovers after a fight. But it's just so full of belting, and the video is so full of fencers... And angels...

I mean it's such a ballsy love song. But it's not romanic, not at all. Because she really needs you tonight. Who are you? I don't know. But you've got serious explaining to do.

There's something inherently romantic about people dying together. Romeo and Juliet. The Notebook. And Death Cab for Cutie. The group's famous song has a nice hypothesis in its first verse:

Love of mine, someday you will die

But I'll be close behind

The grief just keeps on coming. I mean, it's basically a song about purgatory and the eventual judgment of the afterlife. And it also seems to be a song about joint suicide, because the singer is desperate to follow this loved one into the unknown. It may sound like every song ever on The O.C. but come on... There are a lot of other romantic jams out there that don't involve the sentiment, "if purgatory is real, then I'll kill myself." Which, you know, thanks. But chocolates are cool too.

"I know you haven't made your mind up yet." When Bob Dylan wrote that line, it seems to have been construed as something romantic, when in reality, it's part of a song about unrequited obsession and, quite frankly, a strange sort of fetish for Stockholm syndrome. "When the whole world is on your case," he warbles, that's when "I'll make you feel my love" — i.e., when you've got nobody and nothing, when you're a trembling wreck, then maybe I'll seem good enough. Score.

I may not always love you

But long as there are stars above you

You never need to doubt it

I'll make you so sure about it

I'm sorry what? Girl, leave those close-harmony-singing Beach Boys alone. They're only interested in self-gain and surfing.

And again, what's with this "make"? Make. Let's be honest — God only knows what you'll be if you stay with him.

There are two things that you can do to almost ensure a romantic hit:

1) Give it a title that has something to do with heavenly creatures.

2) Base it off heroin addiction.

"Perfect Day"? "Sound and Vision"? Well, maybe they're not romantic, but they're still pretty optimistic-sounding.

It's clear that today's artists seem to have found heroin to be an effective metaphor, and Sarah McLachlan's most famous song is no different; what seems like a beautiful hymnal to co-dependence is really just that. But guess what? Your husband sure as hell doesn't "seep from [your] veins."

Ever notice that Outkast's dancefloor classic is basically Othello with more references to polaroids? No? I didn't either. Until I actually read the first verse:

My baby don't mess around

Because she loves me so

And this I know for sure.

Uh, but does she really wanna

But can't stand to see me

Walk out the door.

Love and death seem to be interchangeable in pop music. Freud would have a bloody field day. Is Celine Dion making a clever play on psychoanalytic theory in the theme tune to one of the best-selling films of all time? Probably not. Yet it goes without saying that the great love song from the Canadian diva is entirely about being in touch with the spirits of the deceased. It would be best accompanied by the gift of a Ouija board on your special day.

There are a lot of things I like to hear in a romantic song. "Staring at the sink of blood and crushed veneer" is not high up on that list. Bon Iver's song seems hauntingly beautiful with its use of phrases like, "in the morning I'll be with you," "I told you to be kind" and "suckle on the hope in light brassieres" (ok, maybe not that last one. That's just a bit too David Lynch). It's a fine example of selective listening creating a romantic anthem out of a despairing requiem. Nice work, humanity.

Finally, one of those love songs so well-known that people probably can't remember who performed it or what the words are. I certainly didn't until I went back and looked at this Take That classic. It feels like a schmaltzy song that in some way says something about millions of love songs, which sounds pretty safe, until:

A million chances pass me by

A million chances to hold you

To where I used to be

I hereby declare a new party game: "Gary Barlow or Prufrock?" Because damn. This gets pretty deep guys. Stick to Ronan Keating instead.