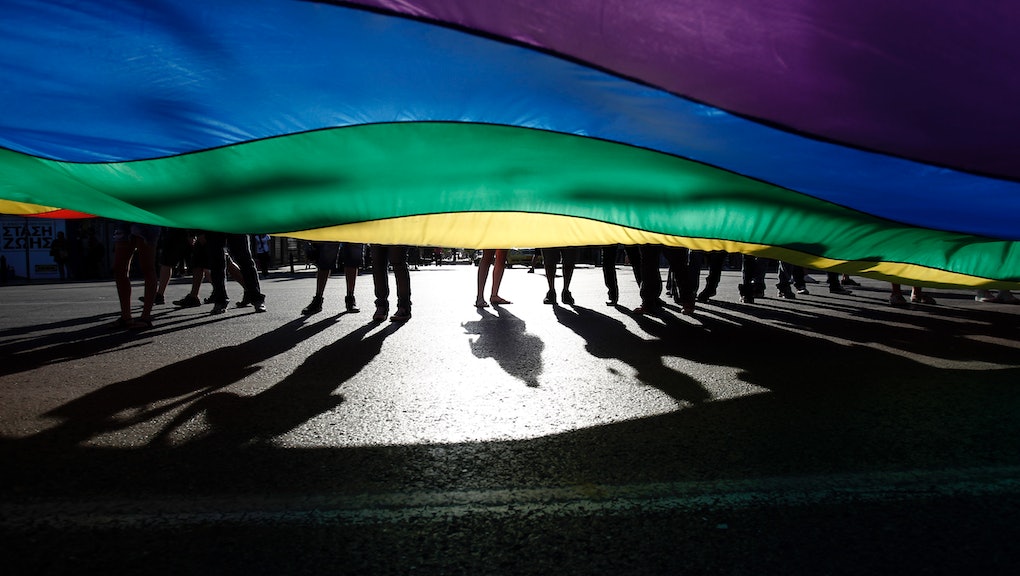 As you prepare for a romantic evening or night out with friends for Valentine's Day, nine men — eight Egyptians and one Saudi — are trying to avoid prison. Their Valentine's Day festivities, celebrated in early November in Egypt, started with drinks and dancing at a private party and ended with a raid and what became 10 days in detention.

That was just the beginning.

Almost two months after their arrest, the men were convicted of prostitution and sentenced to between three and nine years in prison. After prison, the men will enter a three-year probation period for rewiring. In this final stage of humiliation, they will check into mental institutions so that health care professionals can effectively address their deviant tendencies.

Under the din of Egypt's oftentimes-violent crackdown on any type of dissent, the saga of the nine generally apolitical men has gone under the radar. But their plight is no less related to the ruling military regime's consolidation of power.

Image Credit: Pew Resarch. Only 3% of Egyptians polled say that homosexuality should be accepted by society, putting the country near the bottom of the list.

The Valentine's Day raid was actually the second raid of a gathering of gay men since the Egyptian military took the reigns of power on July 3. There were no such raids during Morsi's year-long rule.

Bakier said that the Valentine's Day arrests were made in time to boost support for the military regime's new constitution.

"With the referendum, people were fearful that it would affect Islamic traditions." He said Egyptians were concerned that the new supreme law of the land would weaken "Islamic rules," forever altering Egyptian society.

Bakier is a lawyer from the Egyptian Initiative for Personal Rights, which specializes in cases like that of the Valentine's Day raid. He is representing party attendee Amr Fouad, pro bono. Fouad is 28, but looks much younger. He is currently living with a friend as his family disowned him following his arrest. He also lost his job as a dancer.

Image Credit: Christopher Reeve. Amr Fouad, who bravely agreed to give his name and show his image, faces three years in prison followed by three years of reconditioning because he is gay.

On the night in question, security officials raided the outdoor party at a two-story villa in Cairo's western suburbs. Mobile phone pics reveal quite the gala: security guards in all-black suits, waiters in Valentine's Day red, glittering lights, fancy furniture, tons of food and drink, an illuminated dance floor, even a waterfall emptying into a shimmering swimming pool.

Although there were several hundred mostly male guests, officials only arrested Fouad, eight other men including the party's organizer, and a woman who was hired to serve drinks and water pipes.

The police report states, "The accused were seen exchanging hot kisses and engaging in homosexual acts." There are references to "hot sexual acts" and "hot embraces."

The report said one male arrestee was wearing a woman's wig and another was wearing feminine clothes and accessories. The report speculates that detainees were present to "release homosexual energy," whatever that is.

Fouad denies all of the report's claims, saying no one was engaged in any act beyond dancing in the private garden. He said no attendee would have risked engaging in any behavior that might have unsettled neighbors.

Fouad said that his arrest and what followed — his detention, prosecution and conviction — occurred because he is gay.

Fouad said that the nine male detainees had to clean the station with their pants off while officials ridiculed them. He said that whenever someone entered the station, officials would point to the detainees and say, "Look at them. They're gay," to embarrass them.

Notwithstanding the lack of evidence, Fouad and the eight other men were found guilty of violating Article 9 of Egypt's 1961 anti-prostitution law. For this, they were sentenced to three years in prison. The men, some underage, were charged with fgour. The term, frequently translated as debauchery, is understood to mean male prostitution in this legal context, explains Bakier. He said the charge of fgour is generally used in cases of gay arrests in Egypt. He adds that a conviction usually comes after multiple arrests. Fouad had never been arrested before, making the outcome of his trial all the more questionable.

One of the convicts is 39-year-old Hatem Hamdi. Hamdi, a male belly dancer, challenges conservative notions of sex and gender when he performs. Watching his YouTube videos, I can't help but think that had Hamdi made it to a city like New York, he would have been a headliner at a nightclub instead of a fugitive.

Fouad and one other defendant, a Saudi national, are appealing. Fouad is due back in court on March 3. The other men, like Hamdi, are in hiding.

The appeal can go either way, Bakier said. If the appellate judge takes the time to look at all the documents, he may reduce the sentence. Or not. "In cases related to sexual rights, it is more difficult for that to happen because of the conservative mindset of the judge."

When, under ousted leader Hosni Mubarak, police raided the Queen Boat, a Nile party venue, and arrested 52 men said to be gay, there was some degree of international condemnation.

Today, Fouad and the men convicted with him hear only silence. Fouad wonders where the international support is. "I'm not a thief. I didn't do anything," he said. He reminds me of the three years in jail and three years of reconditioning he faces. "I have no future now."