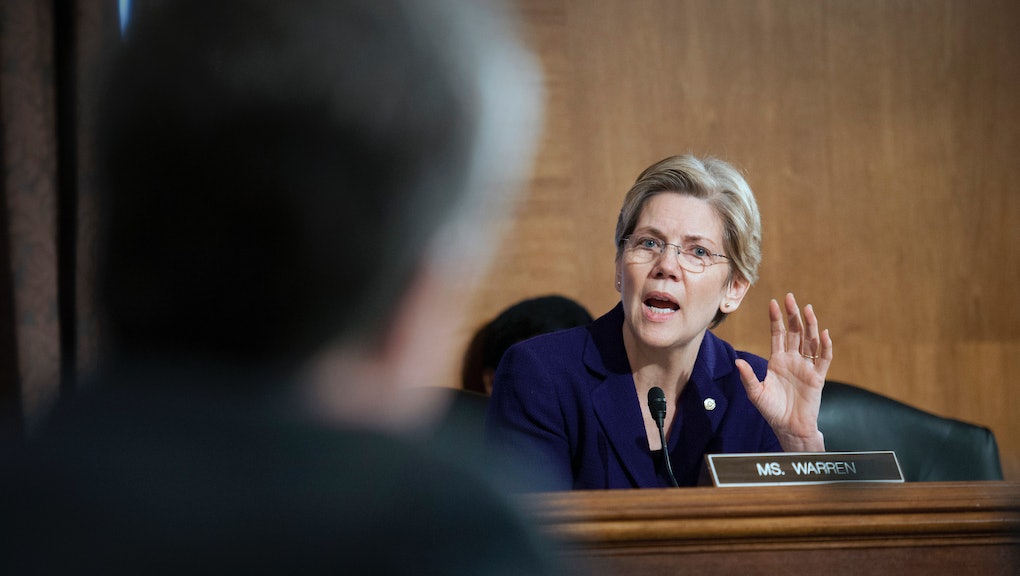 Senator Elizabeth Warren (D-Mass.) has gained a reputation as a fighter for middle class families and she has no problem flexing her muscles.

Whether it's bankers who earn massive bonuses or politicians against raising the minimum wage, Senator Warren appears to have little patience for those who perpetuate systems of inequality. As the senator said last month during a speech at a fundraiser for American Family Voices, she's "madder than hell!" and fighting back against:

1. Those Who Want to Cut Social Security and Welfare

Even though 14 million Americans rely on social security and welfare to stay above the poverty line, politicians are still debating whether to cut welfare by a little or a lot. Senator Warren's response? — "That is the wrong question!"

As an alternative to going to trial, banks often use their vast resources to pay a settlement fee, but this solution gives them little incentive to obey the law. In a bank hearing that looked more like a cross-examination, Senator Warren questioned top regulators about why they're not taking big banks to trial. When the regulators couldn't answer her question, Warren responded with — "I'm really concerned that too big to fail has become too big for trial. That just seems wrong to me."

3. People Who Claim They Got Rich On Their Own

In this speech on fair taxation, Senator Warren calls out those in the 1% who believe that they got rich without any help from the 99%. Citing roads, public education and law enforcement as things that all American citizens pay for, Warren says that there isn't one person who became successful without the contributions of others. "You take a chunk of that and pay forward for the next kid that comes along!"

According to economists, if we started in 1960 and raised the minimum wage in proportion to increased productivity, the minimum wage should now be $22. Fearing a reduction in profits, many sectors are pushing against raising the minimum wage, although, as Senator Warren points out, a small raise in wages would have little effect on overall price level. Senator Warren would like some legislators to just do the math.

Once again, Senator Warren calls out bank regulators for not doing their job — this time for illegal home foreclosures. Although regulators have information about the banks' illegal activities, they do not provide this information to homeowners considering private legal action against their banks. In a call for more legal transparency, the senator demands that regulators start looking out for the American public. It's about time.

Senator Warren finds it difficult to believe that, even in 2013, we are still arguing about women's birth control. During remarks on the Senate floor last October about the government shutdown, the senator assured us that she "will never vote to let a group of backward looking ideologues cut women's access to birth control. We have lived in that world and we are not going back. Not ever."

Today's graduates carry more than $1 trillion in debt, which is more than all the outstanding credit card debt in the United States alone. Senator Warren complains that, despite rising interest rates on student debt, Congress has done little to address the problem. Even big banks receive better interest rates from the government than do college graduates, and if you haven't gotten it by now, Senator Warren isn't exactly fond of big banks. Last May, the senator introduced her first stand-alone bill, the "Bank on Students Loan Fairness Act" to combat rising student loan debt.

Senator Warren is taking on issues that most politicians, even Democrats, are scared to confront so head-on. She's more than just a refreshing politician. She's a role model.