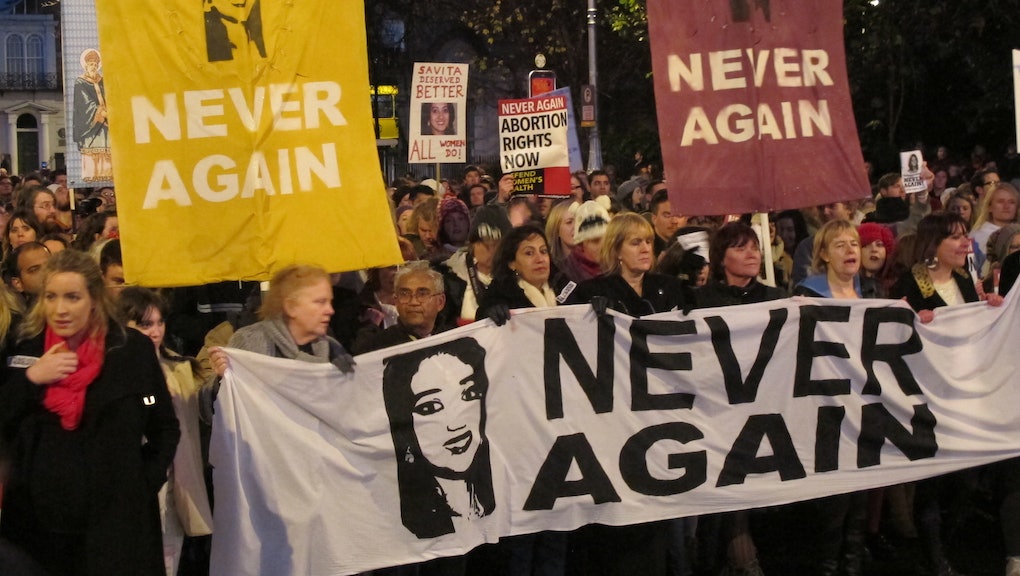 Did you know Ireland has a Twitter account? Started in March 2012 and maintained by WorldIrish, the @Ireland account switches from person to person every week. This rotation it's found a powerful voice in Janet Ní Shuilleabháin, a feminist who has taken the opportunity to declare her support for legalized abortion across the country. She's disclosed to the world and nation that she has had an abortion herself, and that's ruffling some feathers:

(The x case refers to a landmark 1992 Irish Supreme Court case which established the right to a medically necessary abortion; however, no statuatory laws went into effect to actually extend this right in practice to women in Ireland.)

(God loves you and the baby.)

Read the rest of Shuilleabháin's story, including how she had to overcome shaming in her own country for her choice, but discovered countless other women who had to fight the same obstacles to control their own body as she did.

Shuilleabháin's account is raw, shocking, and brings into clear human terms the cost of the anti-abortion movement on women. But it's especially brave because she chose to do so under the @Ireland account.

In Ireland, abortion rights are deeply contentious. Approximately 84.2% of the Republic of Ireland self-identifies as Roman Catholic, according to central government surveys taken in 2011. Largely, as a result, abortions that are performed for any reason other than to save the life of the mother are illegal. Under a law originally passed in 1861 and which stands to this day, abortion is punishable by life imprisonment. Since 1980, an estimated 138,000 Irish women have traveled abroad (mostly to England) to terminate pregnancies.

Anti-abortion organizations are regularly invited to discuss their views with Irish secondary school students, where they're free to provide 11-19-year-olds misinformation on abortion. This ranges from claims that rape victims can't become pregnant (they can) to claims that abortion damages a woman's organs (it doesn't) to exaggerated claims that it's bad for mental health (again, it does not).

In the most extreme cases, women have died because of the Irish government's refusal to permit even some medically necessary abortions. 31-year-old dentist Savita Halappanavar of Galway infamously died of septicaemia following a miscarriage in October 201. Attending medical personnel refused to comply with her repeated requests for a medical termination, claiming the presence of a fetal heartbeat. When her husband begged medical personnel to comply, they allegedly told her husband, "This is a Catholic country."

That case led directly to the Protection of Life During Pregnancy Act passed in July 2013, which gave greater latitude for doctors to perform medically necessary abortions. Despite that success, Irish law doesn't accept rape as medically justifying one. And as the new bill went into effect this year, the Irish health minister told reporters that the government considers the abortion controversy over.

Shuilleabháin and others do not consider the issue closed. According to polls taken in Jan. 2013, 35% of the electorate supported the right to a medically necessary abortion, and an additional 29% would go further and grant abortion rights to all women for any reason. All told, approximately 65% of the population supports access to abortion in at least some cases. (According to the Irish Times, that number is low and 75% support abortion in cases of rape or incest.)

While that's short of the 78% support seen for similar questions in America, it's nearly two-thirds of the country or more. So why does the Irish government still think rape victims need to bear their attackers' children?