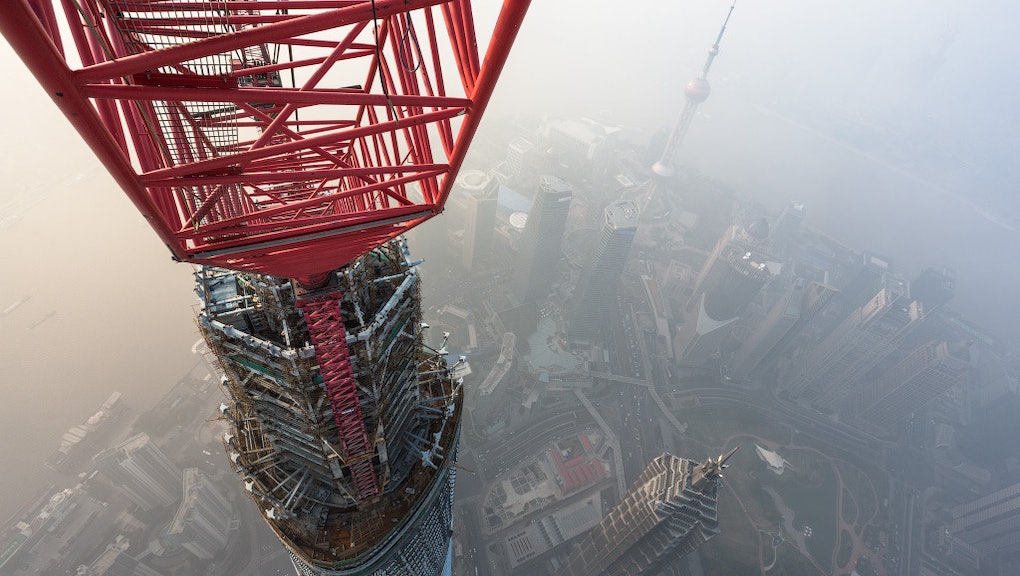 This is What Two Daredevils Saw While Climbing 2,000 Ft. Up the World's Second Tallest Building

The news: On the surface, Vadim Makhorov and Raskalov Vitaliy are just like you and I. But there’s one major difference. In their spare time, they pull insane stunts on incredibly tall structures, like this:

Now take a deep breath. Earlier this week, in the wee hours of the morning, the Russian daredevils donned facemasks, backpacks and a couple of cameras and climbed to the top of the Shanghai Tower in Shanghai, China. The tower is still under construction, but upon completion will stand approximately 2,073 feet tall, making it the second-tallest building in the world behind the Burj Khalifa in the United Arab Emirates.

The building is located in Shanghai’s bustling financial district, and will hold a number of event spaces, offices and the 320-room Jin Jiang Hotel. Housed between the 84th and 110th floors, the Jin Jiang will be the tallest hotel in the world once completed.

The Russian duo begins their video shortly before emerging near the building’s lofty exterior. Due to construction, the extended neck of a crane caps the tower, providing a narrow walkway for those brave enough to risk it. Makhorov and Vitaliy heighten the stakes of their ascent repeatedly, egging each other on right when it seems like a good time to call it a day. The city below is shrouded in early morning fog. Wind is the only sound. When they finally reach the top, the tension is so high that their congratulatory high-five seems more like an unnecessary risk than a moment of celebration.

Here are some of the photos they took (courtesy Vadim Makhorov):

All told, an incredible accomplishment. Next stop: Burj Khalifa?