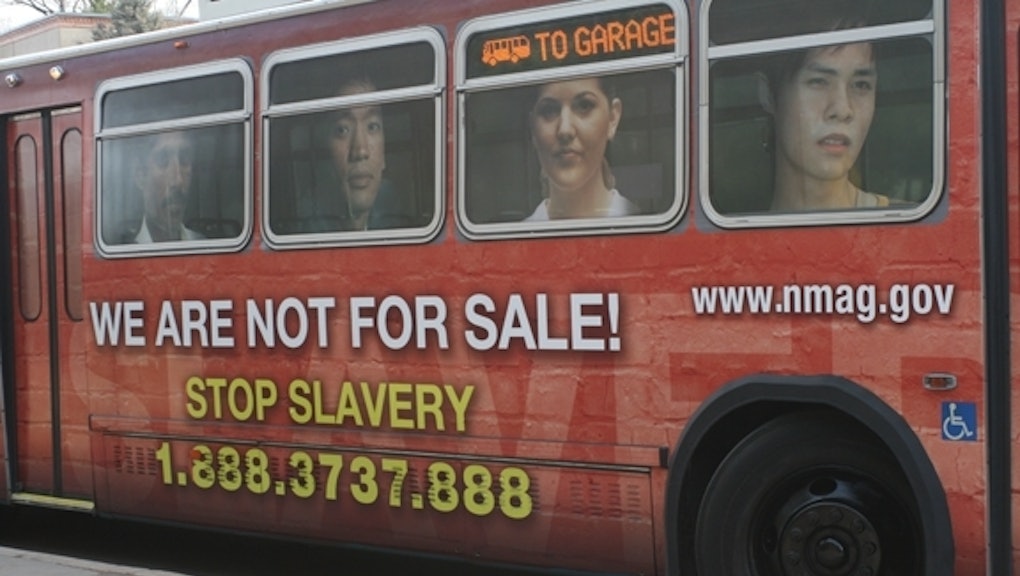 The notion of slavery in a modern society may seem far-fetched, but in reality, almost 30 million people are forced to live as slaves around the world today. They contribute to the production of about 120 goods from 58 countries, with an estimated $15.5 billion of those goods being made in wealthy industrialized countries, according to data from the International Labour Organization.

Some become de facto slaves by borrowing money from wealthy benefactors only to end up working for years for free to pay it back while their debt collects interest. Others, mostly young women, unknowingly enter into slavery by answering a call for a job as a home or child care worker and are taken captive, forced to work against their will and without pay.

According to Walk Free, an organization started by Bill Gates and Hillary Clinton to combat the issue, modern slavery is profitable. It generates at least $32 billion every year, with some goods made by children as young as 5 years old.

And it happens here at home: Between 14,500 and 17,500 people are trafficked into the United States every year, according to the U.S. Department of State.

While Walk Free states that slavery occurs in every country around the world, here are some countries where the problem is prominent and widespread:

Up to 20% of the Mauritanian population is enslaved, according to NGOs on the ground. Some are natives who are bought, sold and rented as slaves, while others are trafficked into the country from surrounding regions. Slavery has been prohibited by Mauritanian law since 1961, however it has been shown to be very difficult for slaves to plead their case to the government.

Since the earthquake in 2010, little has been done to combat slavery in Haiti, where according to Walk Free, one in 10 children are exploited. Women and children forced into camps for internally displaced people after the earthquake are at an increased risk of sex trafficking and forced labor.

A new study by Walk Free found that Pakistan is home to over 4 million modern day slaves, one of the highest rates in the world. A feature story on France 24 found countless poor farmers working for wealthy landowners who persuaded them to borrow money for medical expenses or dowries. These farmers then found themselves working for years to pay off their debts.

Another country where human trafficking is a frequent occurrence is India. Every year countless women and children are taken from remote villages and towns and brought to Delhi where they are sold into domestic slavery. The Delhi Private Placement Agencies (regulation) Bill has been proposed to the Delhi government to define rights of a domestic worker, create a database of all placement agencies and guarantee minimum wage.

Poverty is one of the root causes of slavery in Nepal, with many children sent away as servants to provide for their families. Women and children are often denied basic needs such as health care and education, which contributes to their lack of options and makes them vulnerable to slave labor and sexual exploitation.

According to the International Organization for Migration, people most affected by slavery in Moldova are women from socially disadvantaged families, women subjected to domestic violence, children left without parental care and children placed in state institutions. Many Moldovans are subjected to slave labor in other countries including Russia, Turkey, the UAE and Kosovo.

Modern slavery in Benin consists of many people trafficked both internally and abroad from countries like Niger and Togo. Many young boys are subjected to agricultural work like farming cotton and cashews. Girls are often forced into domestic work in exchange for shelter and food. Benin was one of the first African countries to pass an anti-human trafficking law in 1961. However, a lack of financial backing has stalled many of the anti-slavery efforts put forth by the government.