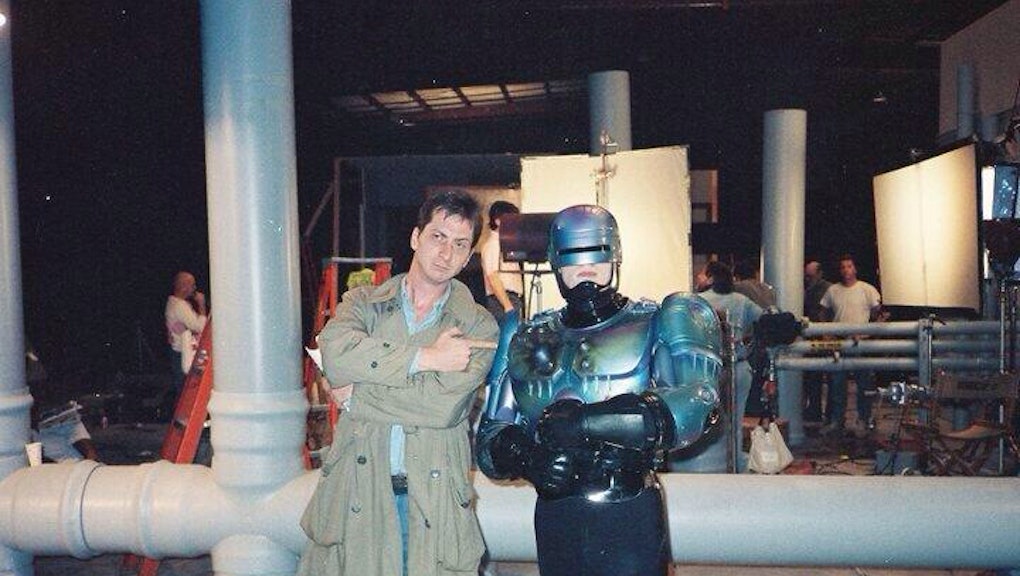 The news: RoboCop is making his fourth appearance on the silver screen this week. And while it’s unclear how fondly audiences will remember this latest iteration, one thing is certain: the Detroit crime fighter’s original return in the first RoboCop sequel was almost universally panned.

RoboCop 2 (1990) was a critical and commercial flop, a distinct downgrade from the outlandish violence and sharp satire of the first film. But few are aware that it also marked the screenwriting debut of legendary comic book author Frank Miller. This rare photo from 1989 shows the 32-year-old Miller on set with actor Peter Weller, in partial RoboCop gear:

Cute. Today, Miller is best known as the man responsible for the graphic novels behind Sin City, The Dark Knight, and 300. But in the 1980s, he was an up-and-coming comic book wunderkind. The success of his take on the Daredevil character, followed by the release of his now-legendary Dark Knight Returns comic, made him the premier comic book writer and illustrator of his generation.

When Hollywood tapped Miller to pen the screenplay for the RoboCop sequel, he was excited to take the job. But the transition from comics to film was rockier than expected: “I had aspirations of directing,” Miller said. “I really thought I could control the thing… [but] there were many hands on the thing.” Writing for film proved to be too “collaborative” an effort, too beholden to the influence of what the Miller saw as intruders to his authorial process: “I realized at that point, that what I own is my comics.”

To this day, Miller’s film output has been limited. He went on to write the third RoboCop film, then didn’t work as a screenwriter again until 2008’s The Spirit. It’s been a less than auspicious Hollywood career for one of the greatest comic book authors in recent memory. And the above photo remains a key reminder of where it all began.