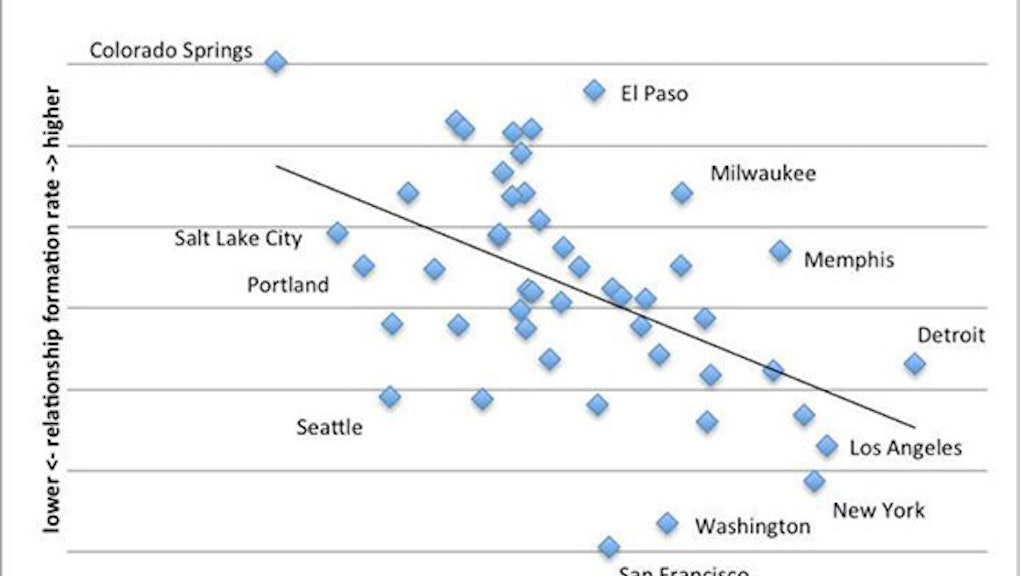 Facebook Knows Just How Long You'll Be in Your Relationship. Here's How.

iHappy Valentine's Day! But before you celebrate, check out the latest Facebook data study which shows that the social media company probably has a better idea if and when you're going to call it quits and return to bachelordom than you do.

It can also predict how likely you are to get into a new relationship in the first place.

First things first: Hip cities aren't good places to find love. The four metropolises you're least likely to find love in are San Francisco, Washington, D.C., New York City and Los Angeles. Meanwhile, Detroit is the worst place for love in the country, with the highest percentage of single people of any city surveyed.

On the other hand, Colorado Springs is practically a lover's paradise, ranking the best of any city in the U.S. for both new relationship formation and the number of people currently in relationships. Anecdotal forum posts from people with firsthand experience disagree, saying that Denver is more fun for singles.

However, Facebook's stats might be skewed towards cities with larger proportions of older people in long-term stable relationships (like my parents in Pittsburgh), so that's not to say that all is lost for those in young, trendy cities.

Beyond that, Facebook did some more intensive research on long-term relationships and charted out the trajectory of breakups. According to researcher Bogdan State, "About half of all Facebook relationships that have survived three months are likely to survive to four years or longer." Breakups are actually lower during February (Valentine's Day, anyone?), but only for the first two years of the relationship. Apparently, people get spooked enough after the two-year mark that marketing no longer inspires them to tough it out.

Regardless of when, it seems like half of couples say sayonara by the end of year four, with most of that hit coming by two years in:

"Another interesting feature is the acceleration of breakups during 2011 — could it be that a rebounding U.S. economy played a role?" State asked. Actually, I'm seeing another possible explanation here — breakups start rising in June every year, right at the same time people are graduating from college and high school, and they continue into the early fall, when college freshmen realize that their high school sweetheart wasn't the apple of their eye after all. Maybe economic effects could account for the rise in 2011, but the summer-fall periodicity is undeniable.

Anyhow, Facebook clearly knows more about relationships than any self-proclaimed love doctor. It's only a matter of time until they refine their analyses to incorporate other data about you. My guess? Eventually they will develop a predictive model which will be able to deliver the bad news to you in the form of singles' ads and dating website promos before you even know the end is coming.