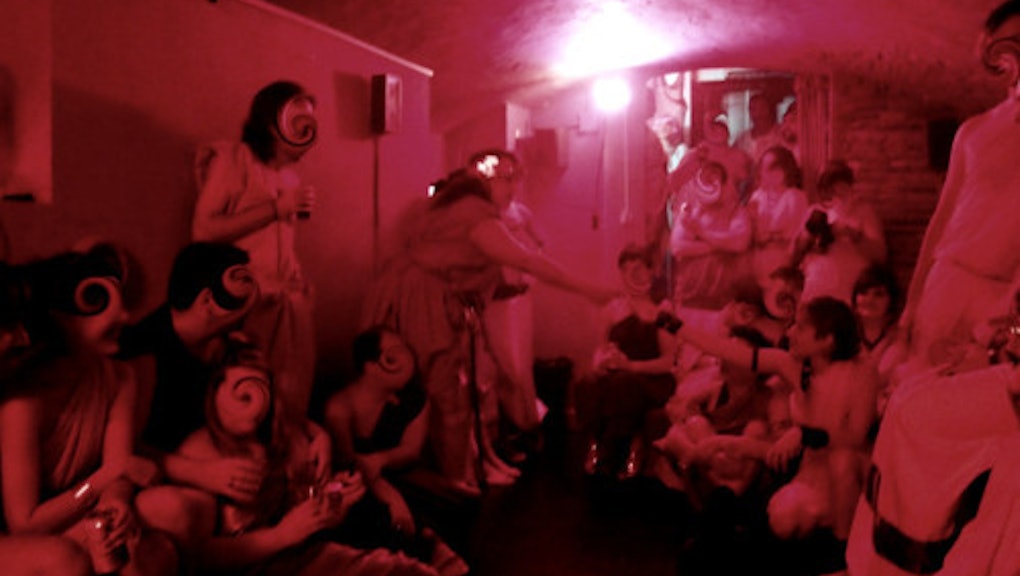 Ancient History of Valentine's Day Reveals a Super Kinky Past

The traditional gripe about V-Day is that the "true" meaning of the celebration is lost in the swarm of holiday capitalism. But even that would gloss over the deliciously twisted origin of this holiday (being celebrated above by modern-day Pagans in Baltimore).

Back in the day, the Catholic Church had a habit of reappropriating Pagan festivals to win over followers. In doing so, as you might expect, it sanitized them. Valentine's Day is a great example.

It's based on the Roman purification festival Lupercalia (possibly from lupus, the Latin for "wolf"), which by many accounts constituted a moment of bacchanalian revelry. Young men and women would be matched at random and would be expected to consummate their new coupling in celebration of the feast.

Image Credit: Pinterest. A fresco in Pompei of Lupercalia enthusiasts.

As described by Plutarch, early Lupercalia festivities were a tad more exciting than V-Day:

Lupercalia, of which many write that it was anciently celebrated by shepherds, and has also some connection with the Arcadian Lycaea. At this time many of the noble youths and of the magistrates run up and down through the city naked, for sport and laughter striking those they meet with shaggy thongs. And many women of rank also purposely get in their way, and like children at school present their hands to be struck, believing that the pregnant will thus be helped in delivery, and the barren to pregnancy.

So how did we get from ancient public thong-slapping to the orgiastic note and flower-giving of modern Valentine's Day?

Pope Gelasius I officially condemned and banned the Pagan festival of Lupercalia at the end of the fifth century, only to re-brand and re-launch it. That's why some Lupercalian traditions showed up in a new holiday added by Gelasius in A.D. 496: St. Valentine's Day, ostensibly to celebrate the Christian martyr of Valentine.

Depending on your source, the original Valentine was one of several characters. Valentine may have been a priest in the first century who secretly married Christians; an Italian bishop in the third century who got executed beaten, stoned and decapitated for making the age-old mistake of evangelizing to someone who clearly did not want to hear it; or even a miracle healer who restored the sight of his jailer's daughter.

Many of the traditions we now associate with Saint Valentine appeared long after his death. Geoffrey Chaucer's poem "Parelement of Foules" was the first to associate the holiday with romantic love, and scholars have suggested this as the origin of most of the modern holiday.

What should we take from this? A healthy skepticism about the "purity" of our holidays. The next time someone complains about Valentine's Day being appropriated by Hallmark, you can tell him manipulation of feast days is one of the oldest human traditions. While it may no longer be acceptable to whip your friends into fertility with leather thongs, you can certainly disabuse them of the notion of any one "true" celebration of the legend of Saint Valentine.