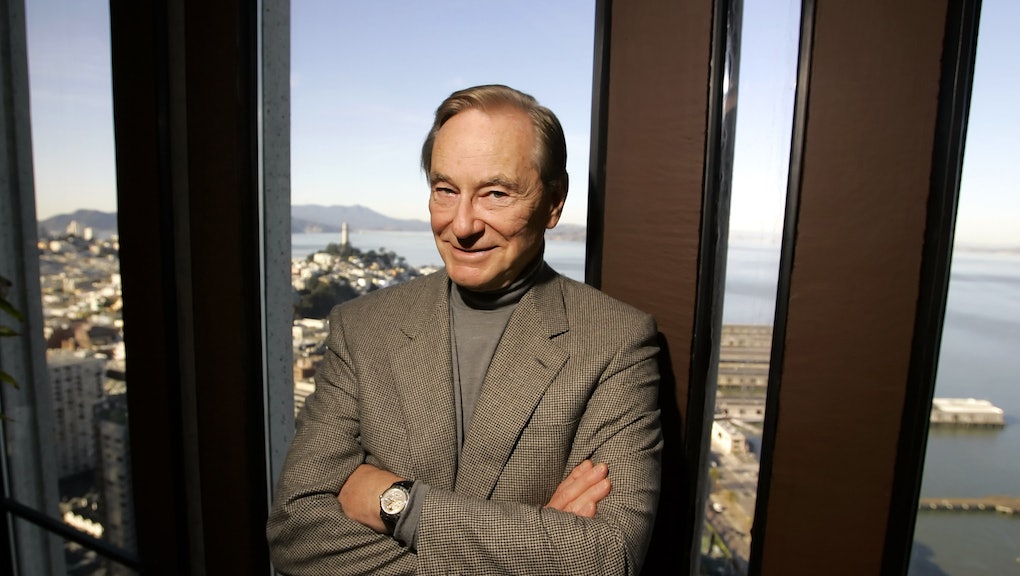 If "You Pay a Million in Taxes, You Get A Million Votes." Yes, a U.S. Billionaire Just Said That.

Billionaire Tom Perkins, who once compared the Occupy movement with Nazism, is again at the center of a storm of controversy. His comment?

"The Tom Perkins system is: You don't get to vote unless you pay a dollar of taxes... You pay a million dollars in taxes, you get a million votes."

There is something instructive in Perkins's ideas, albeit not in the way that he intends. For one thing, as a recent Huffington Post article explained, there are plenty of millionaires and billionaires who share Perkins's views. Even without Mitt Romney's infamous "47 percent" speech as a reference point, it's an open secret that large sections of the wealthy upper class believe their voices should carry more weight than those of their fellow citizens. Usually they go about realizing this goal by selling voters on conservative and/or libertarian ideas through McCarthyist hysteria and exploitation of cultural reactionism, buying politicians with excessive campaign contributions, funding astroturf right-wing movements, and subsidizing sympathetic think tanks. That said, aside from covertly disenfranchising the poor through new voter ID laws, they have rarely attempted to outright prevent lower income Americans from participating in the democratic process.

This doesn't mean that the wealthy haven't accomplished this in the past.

Even after the Revolutionary War ostensibly guaranteed "Life, Liberty and the pursuit of Happiness" to all citizens, many states subjugated the poor through laws that established property and financial requirements for voting. Most of these statutes were repealed by the end of the mid-19th century, usually through gradually non-violent means but occasionally through open rebellion. Until that happened, however, the rich and their political supporters were able to construct elaborate philosophical justifications in favor of them. During the Constitutional Convention, for example, Alexander Hamilton argued:

All communities divide themselves into the few and the many. The first are the rich and well born, the other the mass of the people. The voice of the people has been said to be the voice of God; and however generally this maxim has been quoted and believed, it is not true in fact. The people are turbulent and changing; they seldom judge or determine right. Give therefore to the first class a distinct, permanent share in the government. They will check the unsteadiness of the second, and as they cannot receive any advantage by a change, they therefore will ever maintain good government.

Perkins's ideas can be best understood as a latter-day version of this elitist principle. In Hamilton's era, when the rich believed greater government involvement in the economy best served their interests, plutocrats were Federalists and egalitarians were Democratic-Republicans. Now that we live in a post-Progressive Era world, where the government regulates big business and the wealthy to protect consumers and the poor from economic exploitation, "small government" is the by-word of those who support rule of the wealthy. To counter this, we should remind ourselves of the ideal of Thomas Jefferson (Hamilton's staunch ideological adversary). Appropriately enough, it was expounded upon by Franklin Roosevelt eighty-two years ago at the Commonwealth Club in San Francisco... where Perkins delivered his classist spiel yesterday:

These people, he considered, had two sets of rights, those of “personal competency” and those involved in acquiring and possessing property. By “personal competency” he meant the right of free thinking, freedom of forming and expressing opinions, and freedom of personal living, each man according to his own Rights. To insure the first set of rights, a Government must so order its functions as not to interfere with the individual. But even Jefferson realized that the exercise of the property rights might so interfere with the rights of the individual that the Government, without whose assistance the property rights could not exist, must intervene, not to destroy individualism, but to protect it.

It's easy to dismiss the concerns of liberals and moderates as class resentment or class warfare. The reality exposed by men like Perkins, however, is that the battle is not between a class that has and a class that doesn't, but between those who believe all men are created equal and those who measure human worth in dollar signs.