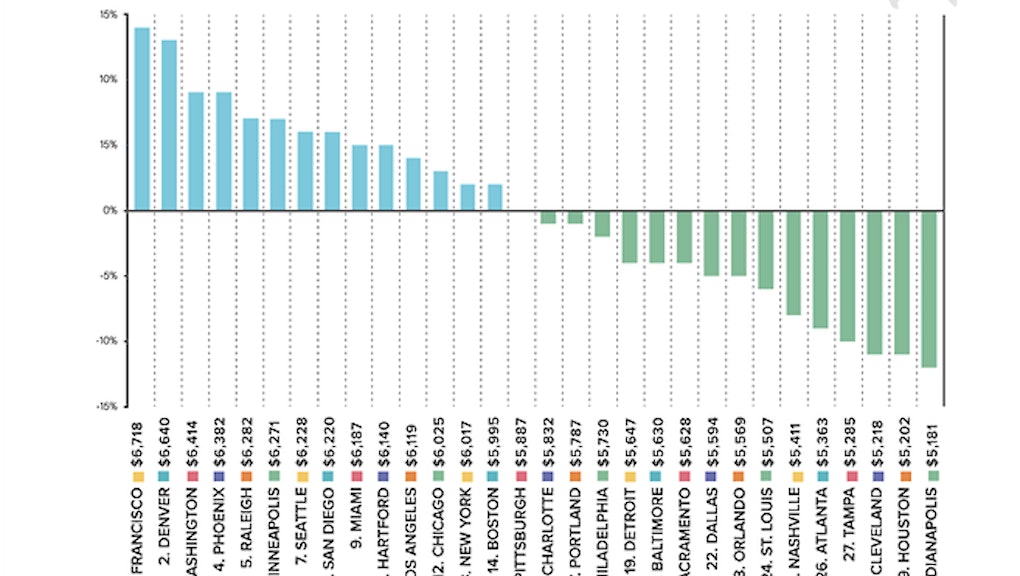 Are You a Young Person With a Steady Job? These Are the Best (and Worst) Cities For You to Live In.

Yuppies: whether you love them, hate them, or are desperately pretending you're not one of them, you're going to have to deal with them.

Locality.com, a web service that lets users track down local services like laundry and pet care, has separated their pricing databased into various designated market areas roughly correlating with metropolitan areas around major cities. Operating on the assumptions that a "yuppie" is a 20-40-year-old in a high-paying field and that "yuppie services" are frivolous purchases like "conveniences, indulging in self-pampering, and a greater focus on self-maintenance and looking good," they've been able to rank the cities in their database according to price level. The result is the Yuppie Price Index, which tells you how cities compare up against each other not based on economic ranks or quality of life, but how affordable it is for the semi-rich to flaunt their relative wealth on an annual basis.

Pittsburgh, for example, is regularly ranked as one of the most affordable cities in the country, but when it comes to pampering dogs and having other, poorer people fold their clothes, it actually ranks as the fifteenth most expensive city in the survey.

Some surprising results; while San Francisco and Washington, D.C., were predictably near the top, so were Denver, Phoenix, and Raleigh. And pricey New York City was 13th on the list, despite an international reputation as an unaffordable city (perhaps due to high competition as well as a large proportion of services provided by immigrants).

Here's the service basket Locality used to determine their costs, based on a survey of "yuppies we know." Either they dramatically overestimated the number of times people get manicures and facials, or I'm very fortunate to not know many of the burgeoning nouveau riche, who are living like Trumps on vacation. Yikes.

Full rankings are below: