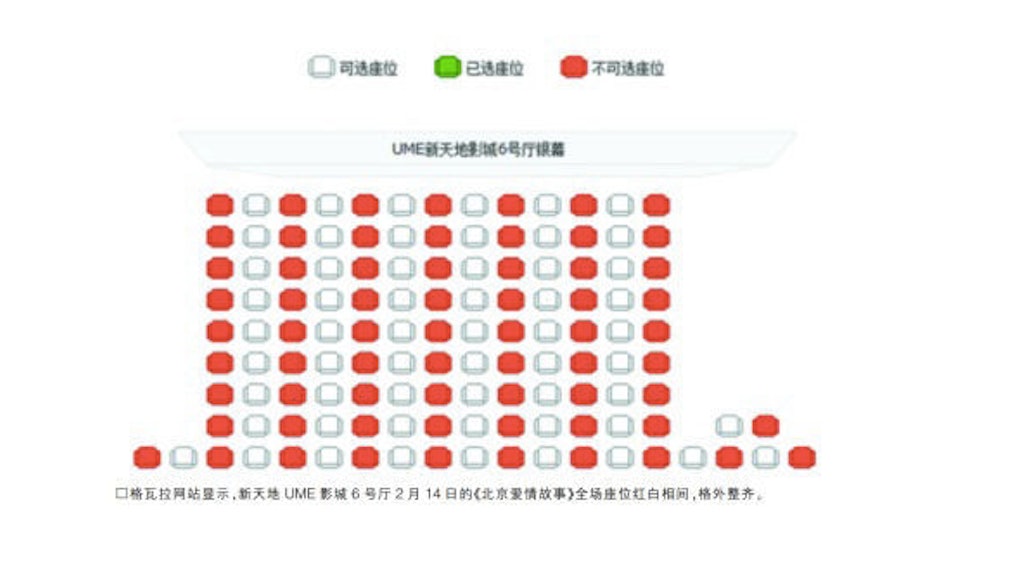 If you thought you were feeling a little lonely on Valentine's Day, you're not the only one. In what appears to be the best Valentine's Day prank of all time, a group of dissatisfied Shanghai singles have purchased a ticket to every other seat in a showing of Beijing Love Story.

Their sole purpose appears to be ruining lovebirds' night out. In a message translated by TIME, an organizer asks: "Want to see a movie on Valentine's Day? Sorry, you’ll have to sit separately. Absence makes the heart grow fonder."

Now, the reservations for the theater look a little — OK, exactly — like this:

Geekosystem reports that the creator of the drive to snatch the seats, a self-described "computer nerd" known only by the acronym "UP" who had recently been dumped, originally began purchasing the seats himself. But when theater management caught on to his scheme and understandably tried to shut him down, the guy enlisted the aid of China's burgeoning "single male who sits online all day" population. According to an interview with the Shanghai Morning Post, he just wanted to do something nice for Beijing's singles.

Hilarious, and sinister in the good kind of way.

As TIME notes, China's one-child policy has left the country with a gender imbalance. Some 34 million "surplus men" statistically have no chance of getting married or finding a girlfriend, which is a real social problem with its own consequences. But China has had a "Singles' Day" (11/11) since the 1990s, which is less sad than it sounds — singles, generally men, gather to party, drink, share gifts, and sing karaoke. Now I guess that it's possible they'll have an entire theater to themselves, too.