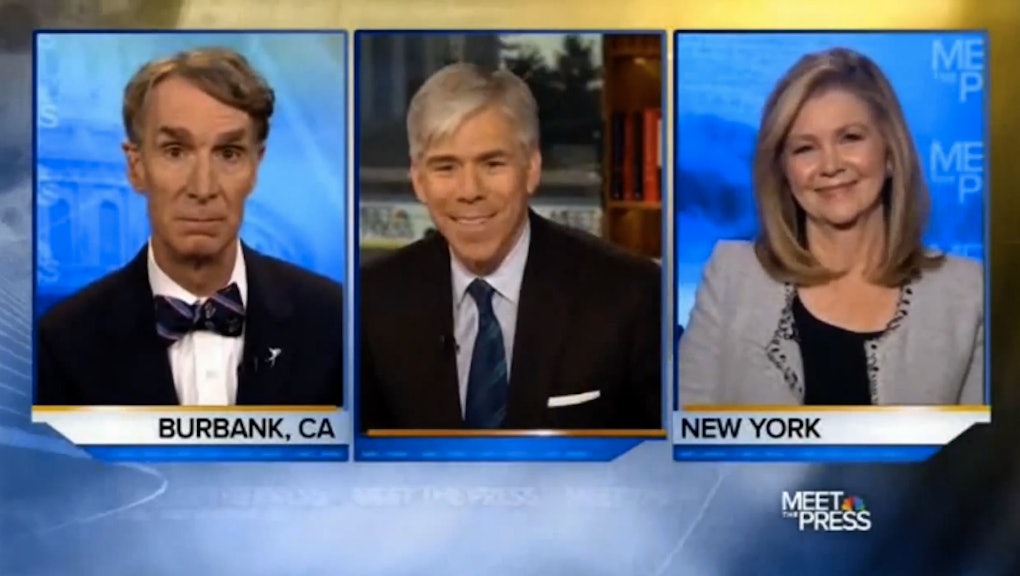 Watch Bill Nye Debate a Climate Change Denier ... Who is Also a Member Of Congress

On Sunday's episode of Meet the Press, Bill Nye the Science Guy debated Marsha Blackburn, the Republican congresswoman from Tennessee who staunchly denies climate change, calling it an "unsettled science."

Instead of having an actual conversation, Blackburn, who is vice-chairman of the House Energy and Commerce Committee, relied on standard talking points to try to cast doubt on climate change and argued that there isn't a scientific consensus on the issue (not true, by the way) and that "you don't make good laws, sustainable laws, when you're making them on hypotheses, or theories, or unproven sciences." Meet the Press's host David Gregory had to correct her on this a couple times, so when that didn't work, Blackburn tried to just discredit Bill Nye.

Blackburn said: "I think Bill would probably agree with this, neither he or I am a climate scientist. He is an engineer and actor. I am a member of Congress."

Luckily for science, Nye didn't take all this sitting down and had plenty of ammunition to fight back.

Nye said: "Gotta say once again, what people are doing is introducing the idea that scientific uncertainty in this case about what we call cold weather events ... is the same as uncertainty about the whole idea of climate change, and this is unscientific. It's not logical," Nye said. "It is a way apparently that the fossil fuel industry has dealt with our politics, and this is not good. You don't need a PhD in climate science to understand what's going on. That we have overwhelming evidence that climate is changing. That you cannot tie any one event to that is not the same as doubt about the whole thing."

At another point during the 12-minute segment, Blackburn tried to argue that the Earth's temperature change wasn't significant, but Bill was more than ready for that.

Nye added: "When you said, congresswoman, that a change from 320 to 400 parts per million is insignificant. My goodness, that's thirty percent. That's an enormous change, and it's changing the world … There is no debate in the scientific community, and I encourage the congresswoman to look at the facts. You are a leader. We need you to change things, not deny what's happening. This weather event's important."

As Blackburn realized the tide was turning against her, she started talking about the costs of potential policy changes to combat global warming and argued that many of them probably just weren't feasible.

Sadly, this was just another case of one side using facts while the other denies reality. But what did you really expect?