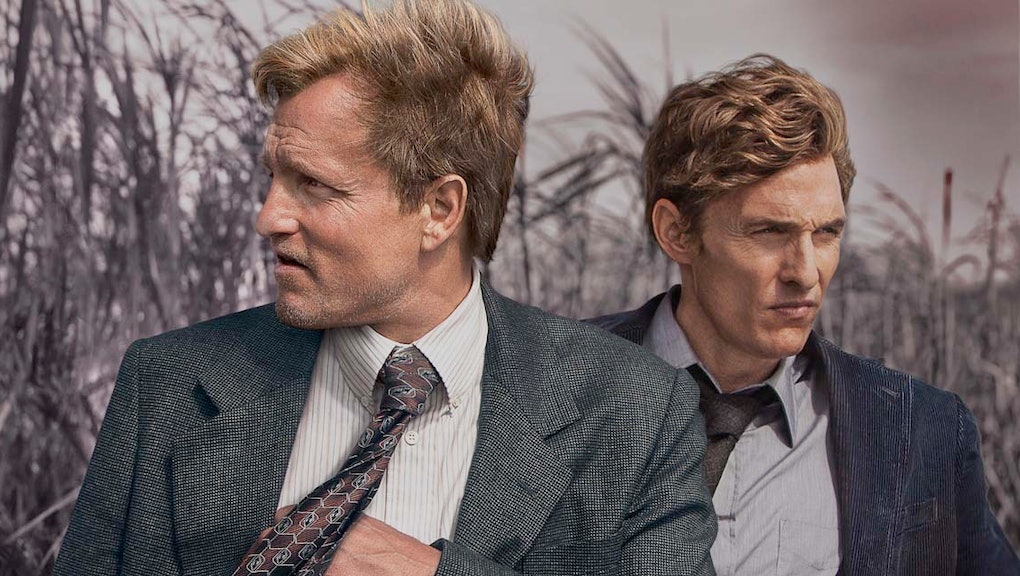 The Secret Sauce of 'True Detective' is its Awesome Soundtrack

The HBO show True Detective has quickly become one of television's most riveting programs. The gritty crime drama, which stars Matthew McConaughey and Woody Harrelson, follows two troubled, Louisiana homicide detectives as they try to solve the haunting and highly calculated, borderline-Satanic murder of a young prostitute named Dora Lange. Like many of HBO's famous TV shows, including The Sopranos and Six Feet Under, True Detective has an impeccable soundtrack, one that introduces viewers to many lesser-known acts and songs with a darker edge. Considering the fact that the show's executive music producer and composer is the legendary T Bone Burnett, the show's musical mastery should come as no surprise. Here are some the best musical moments featured so far on the gripping show.

1. "Far From Any Road" by The Handsome Family

The song "Far From Any Road" by New Mexico-based Americana band and husband-and-wife duo the Handsome Family is now synonymous with True Detective's opening theme. It's not hard to hear why Burnett chose the twisted song — the band is known for their love of dark and violent imagery present in the lyrics of traditional folk murder ballads.

When Detective Hart gives his (spoiler alert!) mistress Lisa Tragnetti (Alexandra Daddario) a visit that reveals the nature of their relationship , Vashti Bunyan's tune "Train Song" plays in the background. The outsider folk artist, known as the "Godmother of Freak Folk," failed to make it big when she was putting out her music in the 1970s. Today, her songs have garnered a sizable following, primarily around alternative folk artists such as Devendra Banhart and Johanna Newsom, many of whom have collaborated with her in recent years. The desperate and lonely lyricism of Bunyan's "Train Song" makes for a perfectly prophetic underlining of Hart and Tragnetti's relationship.

3. "A History of Bad Men" by The Melvins

If you were wondering what coked-up, hardcore Louisiana bikers listen to, according to True Detective, the answer is the Melvins. The doom metal band formed in the early '80s and is known for their drone-y rock and wild-haired front-man King Buzzo. Their song "A History of Bad Men" from their 2006 album (A) Senile Animal appears fittingly in the show's fourth episode in which Hart and Cohle attempt to infiltrate a group of seriously bad men known as the Iron Crusaders bike gang.

Heard in the teaser that introduced True Detective, The Black Angel's "Young Man Dead" is bringing the Austin-based psyche band to HBO audiences. It's not the first time the band's music has been featured on soundtracks for movies and TV. Their songs have appeared in Californication, The Twilight Saga: Eclipse and even a History Channel documentary on Charles Manson.

Fans of the show will know that Detective Cohle is sort of a cynical fish-out-of-water in his Lousiana police unit, so it doesn't seem odd that Burnett would want to give Cohle a music taste that diverges from classic Southern rock. "He's not going to be listening to music about his truck, or music about how tight his jeans are, or music about how much beer he's had to drink before he gets in the truck!" said Burnett in an interview about the show's music with Mother Jones, "He's gonna be listening to some Captain Beefheart." Known by his stage name Captain Beefheart, the eccentric psychedelic musician Van Vliet, is widely considered one of the greatest musicians of all time, and his song "Clear Spot" works perfectly in a scene where Cohle is somewhat obsessively sifting through photos of murdered women for the investigation.

Burnett's love of featuring country-meets-psychedelic music in True Detective is most evident in his inclusion of 13th Floor Elevators in the show. The Texas band is considered one of the first specifically "psychedelic rock" acts. What better music to soundtrack an episode titled "Seeing Things," in which Cohle literally does trip on drugs, than with the trippy, fuzzy rock song "Kingdom of Heaven."

7. "Are You Alright" by Lucinda Williams

Named America's best songwriter by TIME Magazine in 2002, Lucinda Williams has been making acclaimed country music since her first album Ramblin' On My Mind in 1979. Her song "Are You Alright" is used in an episode that highlights both the detrimental state of Cohle's drug addiction (and the stealing of the department's stash) and Hart's marital problems, making the song a simple but straightforward way of underlining the two detectives' vices.

True Detective left audiences stunned with that now-famous six-minute, one-take shot of the raid at the end of the show's fourth episode. Burnett ended the suspenseful and technically impressive long-take with Grinderman's explosive, electric-guitar heavy track "Honey Bee (Let's Fly To Mars)" from the band's debut, self-titled 2007 album. Fronted by Nick Cave of the famous '80s post-punk band the Bad Seeds, the English alt garage-rock band Grinderman split in 2011 but reunited for a one last performance at Coachella in 2013.