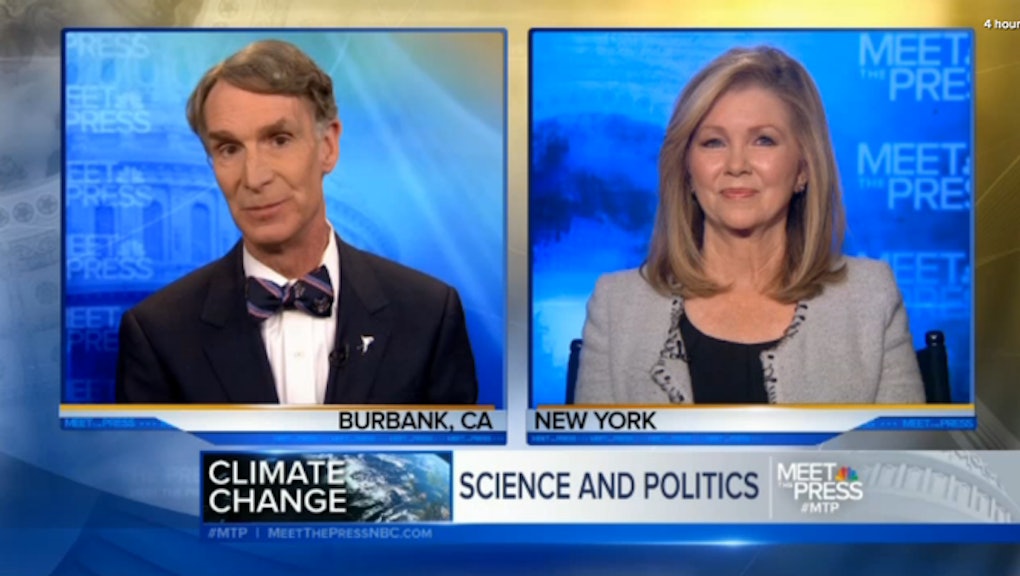 Bill Nye has been a popular science educator for well over two decades. Recently, though, the Science Guy has taken a much more aggressive tone. Starting with a BigThink video in 2012, Nye has gone on a crusade against science denial, particularly creationism and global warming skepticism. Though Nye has stirred up conversation about some important issues, he's received a lot of criticism from the scientific community. At best, they say, Nye's debates don't do any good because they don't advance science education. At worst, he's doing harm to his cause by giving these crazy ideas a wider audience by engaging them. These are interesting arguments, but they're ultimately incorrect.

There's a simple reason Bill Nye needs to keep debating these anti-science figures: By taking these anti-science groups to task, Nye is forcing their supporters to grapple with the facts. Often times, getting people engaged in that kind of conversation is the best way to change their minds.

Many academics assume that fundamentalist Christians (or any anti-science group) are cut off from rational thinking, insulated by their beliefs. But this isn't always the case; engaging peoples' mind's works, even if those people happen to harbor strange ideas about science. It wasn't until I took an interest in science journalism in my college years that I was able to objectively evaluate the evidence for evolution, for example. Writing about the topic forced me to think through all the evidence scientists have presented in support of the theory. As a result, I had no choice but to change my mind.

It's no coincidence that children who grow up in fundamentalist religious circles shed many of their radical beliefs in college, when they're forced to grapple with ideas that challenge their upbringing on intellectual grounds. Indeed this is one of the reasons so many private Christian high schools and colleges have sprouted up around the country, because evangelical parents know their kids aren't immune to what they would've learned in biology class at a university. Moreover, large numbers of Christians in America already reject creationism. Given those facts, there's no reason to think that Christians who accept a literal interpretation of Genesis can't be reached with evidence.

But the creation-evolution debate is just one example of debate changing minds. Does anybody remember the 9/11 conspiracy theories? Until I wrote this article I had forgotten them entirely. They've been relegated to the trash bin because the experts came forward and demolished (yep, that's a pun) every argument the conspiracy theorists concocted. Despite well-funded campaigns in California and Washington to label genetically modified food in the last two years, voters in both states rejected the proposals. Prominent critics of GMOs, too, have come out in support of the technology because the evidence is so overwhelming. Vaccine skeptics have also taken a beating from scientists in recent years. Though arguably the most successful of all anti-science groups today, thanks to spokesmen like Jenny McCarthy, they have yet to convince the public that vaccination is dangerous. The examples go on and and on, but the point is clear: When experts take on promoters of bad science, the latter almost always lose — and that's good for everyone.

There will always be people who reject science in favor of bullshit; that's inevitable, but it's also irrelevant. The point of taking on bad ideas and the people who promote them is  to limit their influence on society. They don't deserve to be left alone. That's why Nye's critics are framing the conversation incorrectly. Nye isn't doing science a disservice by debating creationists. On the contrary, he's going onto their turf and beating their silly asses into submission, in front of millions of people. We need a lot more scientists and educators to do exactly the same thing if we want to promote science literacy.