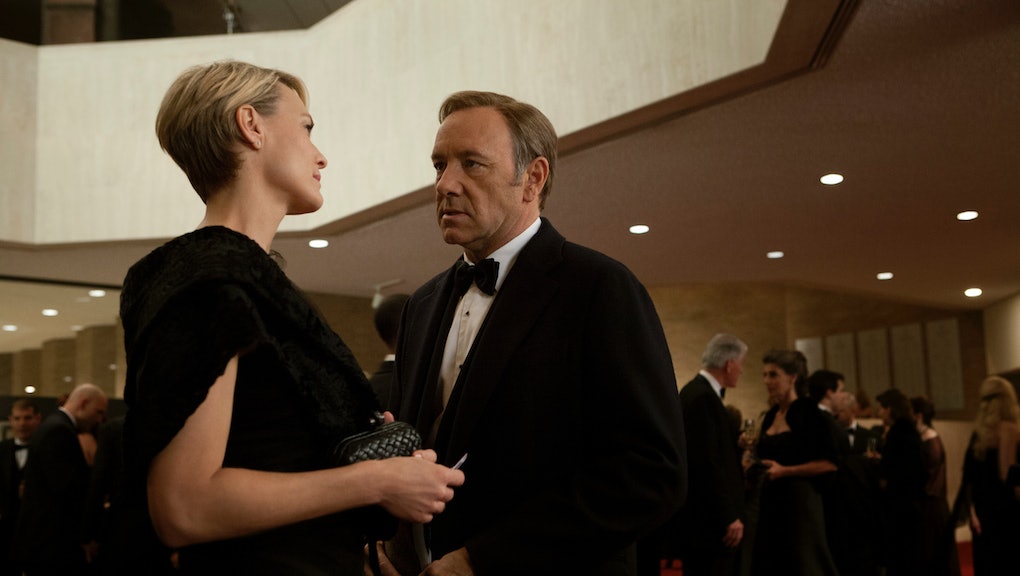 Why 'House of Cards' Is the Sexiest Show on Television

WARNING: This entire piece is one massive spoiler.

Of the many Churchill-worthy lines of dialogue in House of Cards, one of the most memorable is Frank Underwood's observation about sex in season one: "Everything is about sex except sex," he tells Zoe Barnes, a young reporter with whom he's having an affair and who he'll eventually go on to kill. "Sex is about power."

It's all pretty sinister, but it's more significant than just a great line of dialogue. This line — and the scenes that came with it — only proved that House of Cards is one of several TV shows finally committed to representing sex in all its thematic complexity. But where shows like Girls and Looking have tried to capture modern sex by being as unsexy as possible, House of Cards has quickly become the sexiest show on television. The romance in season 2 is as complicated as that of any show currently on air, but it isn't using awkward sex to get its point across. In fact, it's pretty steamy throughout.

Frank's power-grab approach to bonking is still the core philosophy of season 2. But the sex in season 1 was anything but sexy: aggressive, stunted, tainted by manipulation and depicted from unflattering angles in even less flattering circumstances. This was evident in the frigidity of Frank and Claire's relationship and the moments in which genuine sexual tension (Frank's friend from college, Claire's affair with the photographer Adam Galloway) were sutured like wounds.

But in season 2, all that has changed. Some of the most passionate scenes are only more powerful and engaging because of the tense psychology behind them. Take, for instance, the menage a trois between Frank, Claire and Edward. This scene is anything but frigid and awkward because it drips with years of jealousy and longing.

Part of the genius of Girls, for instance, is that it managed — by giving us sex that felt real in its gracelessness, and by showing us bodies we don't normally see on TV — to make sex and nudity feel new again. But those sex scenes were far from the steaminess of season 2 of House of Cards. One of the show's sexiest scenes came in season 2 when Hannah carried on a weekend-long romance with a young doctor. One critic praised it as a "short, potent sequence [that] was a departure from the sex we've seen so far on [Girls] because it wasn't played for laughs." The scene, in other words, was sexy, and it was sexy because it worked: because it depicted Hannah demanding pleasure, selfishly and powerfully, and because ultimately it's this aspect of the sexual experience — victory, satisfaction — that we find erotic, not bodies.

It is not the task of TV shows to arouse us. Nor is it their task to depict sex in a flattering light for the sake of it. Ultimately, if done well, an unsexy scene can tell us as much about a character as a sexy one can. And, in fact, the pressure on a sexy scene to propel a storyline — instead of just giving the audience easy fun — is greater. But the conversation about sex — and, really, sexiness — shouldn't stop at denunciations of tasteless sex scenes (a la Blue is the Warmest Color) or (justified) rebuttals to insensitive TV critics. It's important to rework our conceptions of sex and sexuality as these shows have done, and to identify when sexiness is done right. To show, as House of Cards has done, that sex on television doesn't need to be awkward to feel true.