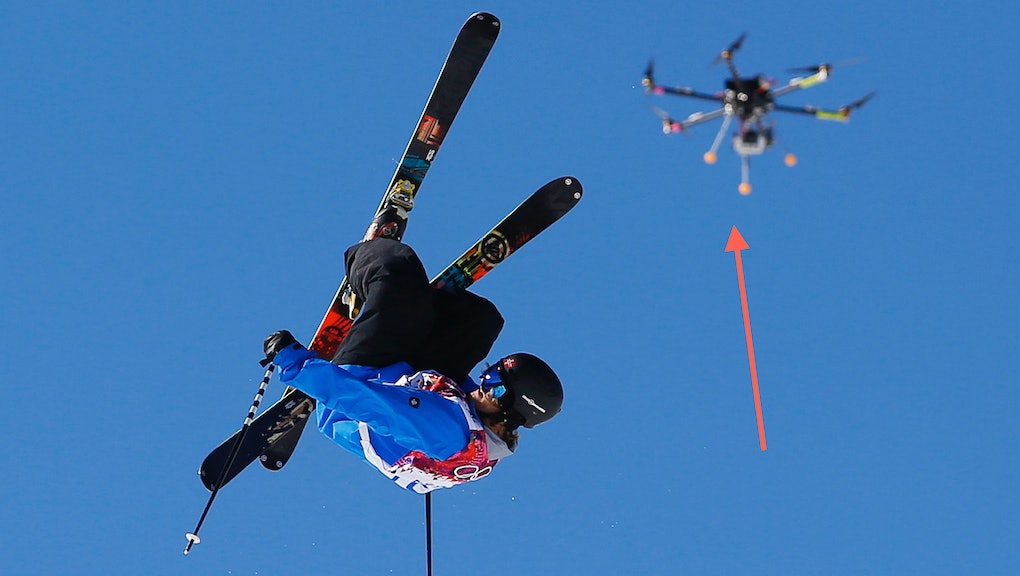 As you might have noticed during this year's Olympic coverage in Sochi, small, spider-shaped drones are taking over a lot of the video and filming duties for events like snowboarding and skiing. Their easy maneuverability gives them amazing access to incredible aerial shots and puts them in position to get these awesome views of Sage Kotsenburg's gold medal slopestyle run.

According to pilot and cameraman Remo Masina, who has used drones to film skiers in Switzerland for commercials, drones offer a cheap, simple and flexible alternative to filming with a helicopter and camera crew.

"We can go really, really close. And we are really quiet, so nobody is distracted," said Masina.

A drone's mobility and flexibility provides the opportunity for unique angles that "allow more height than a crane, but are able to get lower than a helicopter," according to a statement from Olympic Broadcasting Services.

Plus, they look pretty cool in the background of other shots.

And don't think of the video drones as a passing fad. Masina says that drones are "for sure" the future of sports broadcasting. A UK company called HeliPOV, which builds drones onto which existing cameras can be mounted, has already compiled some pretty cool footage of what these little guys can do.