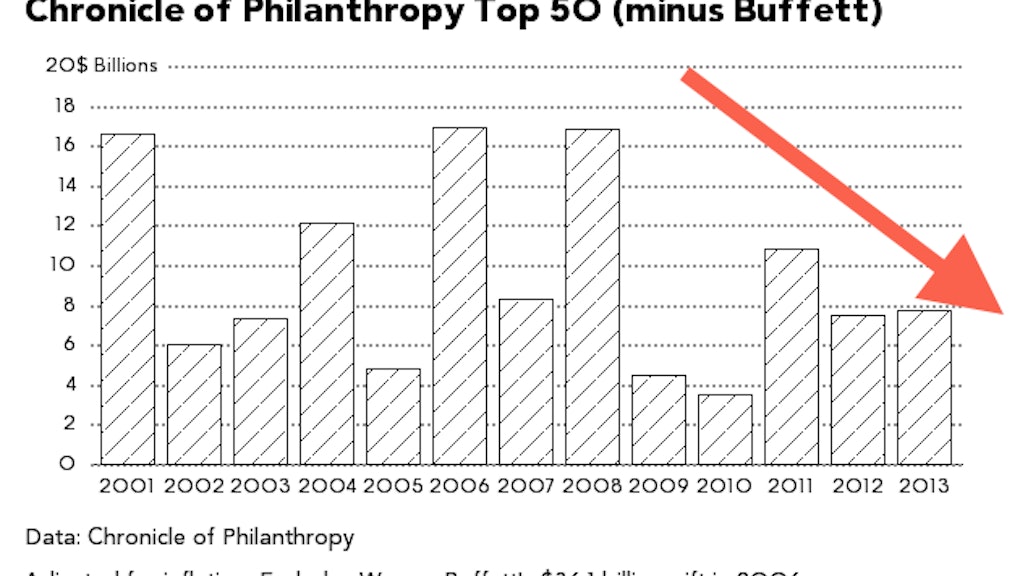 As Billionaire Wealth Skyrockets, Here's What Happens to Their Philanthropy

Charitable contributions from the ultra-rich are up this year, according to new data from the Chronicle of Philanthrophy for 2013. With $7.7 billion in contributions, 4% more than 2012, the scions of finance and industry are practically bending over backwards to bequeath their wealth to the needy.

Or so they'd have you think. While our immensely rich Masters of the Universe talk the talk, do they walk the walk? Bloomberg Businessweek cracked the numbers, and found the answer is a resounding "No."

Here's the data. First, here's what the trend for charitable giving looks like, excluding Warren Buffet's 2006 gift of $36.1 billion to the Bill and Melinda Gates Foundation (a one-time outlier):

Now, we'd have many fewer problems if more of the ultra-rich were like Buffett. But the data conclusively demonstrates that they're not. Here's what the long-term gift-giving pledges look like:

As Businessweek Bloomberg writes, "Giving is up since the financial crisis. But while the stock market has made a complete recovery, top-50 philanthropy has clearly not." Meanwhile, the collective wealth of the Forbes 400 list more than doubled from $955 billion in 2003 to more than $2 trillion in 2013. So it actually appears that in the short-term that the rich in fact give proportionally less as they get richer.

There are a couple rejoinders to this — someone with an unconventional moral position could say the rich are under no obligation to redistribute their wealth to the masses or the needy, while conservative economists might argue that these bastions of wealth are what fuel the economy and create jobs. But at least one pillar of the argument for preserving the wealth of the ultra-rich — that they'll flood us in generosity and charitable contributions — has taken a blow.