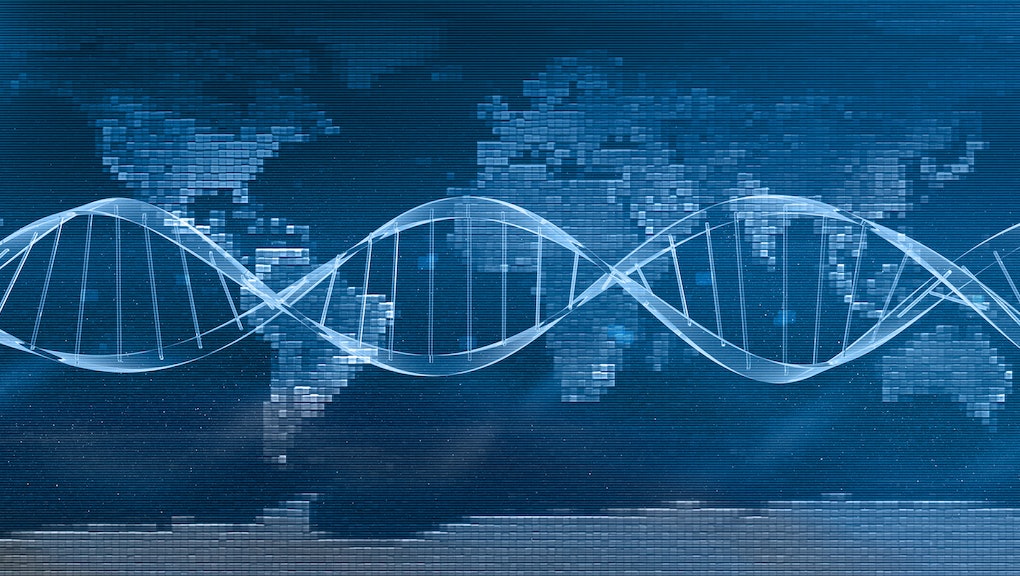 DNA provides clues to the history of human migration — as different groups from different ethnicities and backgrounds encouter each other (think the Mongol conquests in the 1200s), their DNAs mix. As populations of humans have spread across the globe from their origins in Africa, slight genetic differences can be seen over time.

Recent work has focused on what happens when these separated groups come back together. This phenomenon, known as "admixing," tells an interesting story. In a paper published in the journal Science last week, researchers presented the results of studying 95 different populations over the last 4,000 years of genetic history. By developing sophisticated statistical methods, collectively called "Globetrotter," the research is the first to simultaneously identify, date and characterize genetic mixing between populations.

Image Credit: Science. Admixing, showing pieces of inherited DNA getting smaller as they are passed down through generations.

Pieces of DNA from common descendants can be seen by analyzing modern day genomes. Though as these pieces are passed down through generations, the size of these segments gets smaller. Therefore, these segments can tell scientists when the mixing occurred and which groups mixed. The longer the pieces of DNA, the more recent the mixing.

The result is genetic data that shows mixing between populations aligns to interesting historical events. While genetic data doesn't describe everything — because the extent of influence that an event has on genetic mixing is unkown — this research seeks to combine historical and genetic research offer insights into both.

These findings have been mapped into this fantastic interactive site:

Some highlights are listed below. For more information you can read this FAQ.

The Kalash group is an isolated population in Pakistan. The Kalash show the oldest estimated date of mixing in these studies from sources that come from modern Germany and Austria. These results substantiate the belief that the Kalash originate from Alexander the Great's invading armies.

These results are a mixture between distinct European groups — one more southerly and one more northerly — during the latter part of the first millennium. These may correspond to the expansion of Slavic language-speaking groups due to displacement caused by the Asian steppe invaders around this time.

In populations around the Arabian Sea, researchers detected mixing with sub-Saharan Africans from the 7th century — a period that coincided with Arab expansion and slave trade in the area.

The DNA of the Tu people in China points to mixing with Europeans around 1200. The source of these DNA fragments may be from merchants travelling along the Silk Road, a 4,000-mile route that facilitated trade between Europe and the Far East.

The expansion of the Mongol Empire was a famously rapid. These studies confirm that there was an abrupt transfer of DNA across Asia during this period. DNA evidence from the Hazara people of Pakistan agrees with historical records showing that they descended from Mongol warriors. Six other populations, from as far west as Turkey, demonstrated similar evidence of genetic mixing with Mongols around the same time.

South Africans who speak the Bantu language display DNA fragments from the San people, dating back to 1222 C.E. This is consistent with the expansion of Bantu-speaking peoples from sub-Equatorial Africa into southern Africa.

Research shows significant mixing in Cambodia with the Tai people around 1362 C.E. One of the most powerful empires in Southeast Asia, the Khmer Empire, fell around this time, which was an event that many believed relates to the influx of Tai populations during this time.

The Hezhen from northeastern China are descendents from the Jurchen. They show mixing with more southerly Chinese populations around 1560 C.E. The results overlap with the expansion that happened in the later part of the Ming Ddynasty.

These studies show mixing between the Maya and three other groups around 1670 C.E. These DNA fragments appear to be Spanish, Wwest African and Native American-like. This is consistent with colonial-era migrants from Europe and Africa around that time. The American DNA can be traced back to mixing with the nearby Pima population.