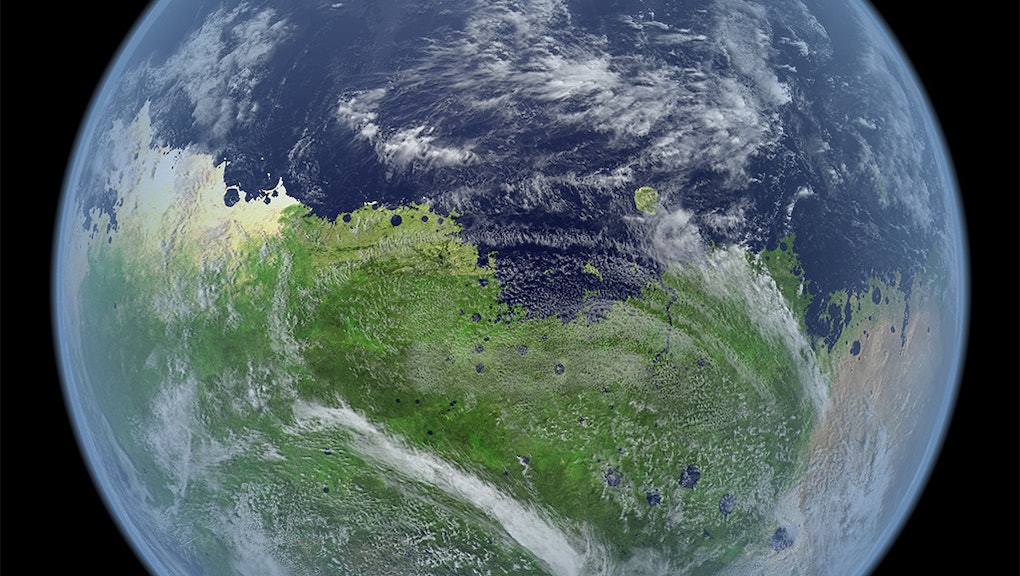 What if? Mars is famous for its dusty, barren surface. But imagine if our Solar System contained another "pale, blue dot." What if Mars' valleys were full of flowing streams of liquid water, and its thin carbon dioxide-filled atmosphere was stuffed with fluffy white clouds made of vapor instead?

Software engineer Kevin Gill used data from NASA's Mars Reconnaisance Orbiter (MRO) and Mars Orbiter Laser Altimeter (MOLA), and the result is stunning. The MOLA is an instrument on the Mars Global Surveyor (MGS) that mapped the height of surface features on Mars. Assembling the pieces in open source software, Gill picked an arbitary sea level, and used GIMP to paint the features onto the satellite images using these measurements.

Gill admits that much of his process was creative, rather than scientific, and was inspired by NASA's "Blue Marble" images. "I had been doing similar models of Earth and have seen attempts by others of showing life on Mars, so I figured I'd give it a go," Gill said. "This wasn't intended as an exhaustive scientific scenario as I'm sure (and expect) some of my assumptions will prove incorrect. I'm hoping at least to trigger the imagination, so please enjoy!"

The results are thought-provoking images, regardless of their accuracy. In a second projection, this time of the planet's Western Hemisphere, the striking feature of Olympus Mons darts out from the horizon. The Martian volcano is three times as tall as Mount Everest, making it the second tallest mountain in the Solar System.

Perhaps the greatest takeaway from these artistic transformations of another planet is just how unique our place in space and its fragile life-nurturing geography is.

New evidence of flowing water on Mars: Earlier this month NASA found more compelling evidence for flowing water on Mars. Of course, water has already been discovered in the form of ice, but Georgia Tech scientists working with the Mars Reconnaissance Orbiter may have found clues of something more.

Looking at images of martian mountains, scientists spotted dark lines that move down the slopes as surface temperatures rise. While these lines don't reveal direct, spectral evidence for the presence of water, they do contain ferric and ferrous minerals. Because the surface of Mars is so cold, any flowing water would need some type of natural anti-freeze — the minerals are the first evidence that these substances are present. "We still don't have a smoking gun for existence of water in RSL, although we're not sure how this process would take place without water," says graduate student Lujendra Ojha in a NASA press release.

While the existence of ice means that renderings like Gill's have been interpreted as pictures of what a vibrant place Mars may have been in the past, recent evidence suggests that modern day Mars may not be so static either. That could be a really big deal for those hoping to find evidence of some form of life on the red planet.