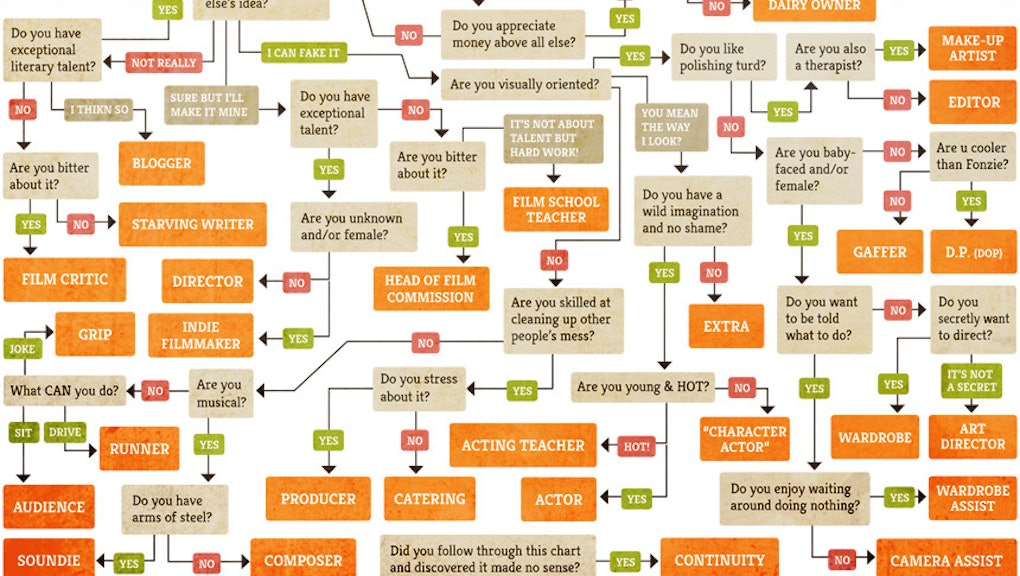 Want to Work in the Film Industry? This Flowchart Shows Which Job Is Best for You

Anyone who’s spent a day in Hollywood knows how nauseating, desperate, frustrating, and (in rare cases) incredibly rewarding a job in the entertainment industry can be. Even those savvy enough to parlay a one-night stand with Harvey Weinstein’s niece’s best friend into a wardrobe assistant gig at Miramax must endure the pettiness and egomania that define the worst this business has to offer. Most people give up. But you’re not “most people,” are you?

If you still have the stomach for it, this helpful and humorous flowchart will help determine which industry position best suits you:

Still want to work in the movies? Most of these conclusions are based on industry stereotypes, like the idea that a “visually-oriented” person who likes “polishing turd” but is “also a therapist” should become a make-up artist. Some hint at Hollywood’s gender disparities, like the notion that the difference between an “indie filmmaker” and a “director” is that the indie is “unknown and/or female.” At one point, it even calls its own bluff: anyone who “[followed] through this chart and found out it made no sense” should work in “continuity,” making sure props and lighting match from one shot to the next.

But no matter what, don’t get discouraged. Working through these options might not yield the results you were hoping for. However, that doesn’t mean you have to give up on your dream job. If you want to be an art director, by all means, be an art director. Just don’t act like the chart didn’t warn you once it turns out you were meant to work in catering.