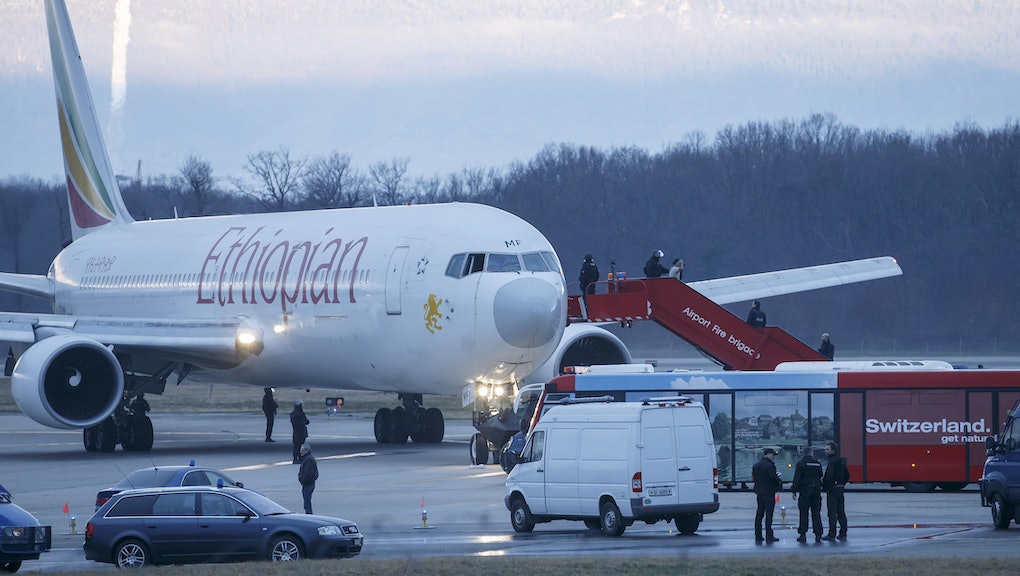 The news: On Monday an Ethiopian Airlines co-pilot hijacked a plane flying out of Addis Ababa and bound for Rome and flew it to Geneva where he wanted to seek asylum. According to reports, the co-pilot, an unnamed Ethiopian man born in 1983, took control of the plane and locked himself inside the cockpit when the pilot stepped out to use the bathroom.

The whole ordeal lasted about six hours, at which point the Boeing 767-300 carrying 200 passengers was finally landed in Geneva and the co-pilot used a rope to lower himself out of a window where he then asked for asylum — but it's not likely he'll be so lucky.

Although initial reports claimed that passengers on the plane were unaware it had been hijacked, one Reddit user did an AMA earlier today recounting his experience on the hijacked plane and according to him, it was hell.

Here's what happened: Reddit user OK3n said he fell asleep shortly after take off but was woken up about an hour later by the sound of the plane's oxygen masks going down. Feeling panicked, the passengers looked at each other in confusion until a "deep and angry" voice came through the plane's intercom saying "SIT DOWN, PUT YOUR MASKS ON, I'M CUTTING THE OXYGEN," three times. It was at this point real panic started to set in with the passengers. Soon after the oxygen levels started to fluctuate in the cabin and quickly after that, the plane started falling and rising for about eight seconds before it finally stabilized.

"We got scared because we saw these (oxygen masks) come down and the voice of the pilot, that usually is friendly and mellow, was cracking and worried, saying, 'Breathe with the oxygen masks! Sit down!' ... Then the plane fell sharply two times," Italian passenger Paola Casale told the Associated Press.

Another reddit user commented in the AMA thread saying that a pilot can't actually "turn off the oxygen in the cabin," only depressurize the cabin, which would make breathing very difficult, but would also cause a number of other problems for the plane. But OK3n, and probably a lot of other passengers, didn't know this and were terrified. It was also unclear during the flight if the co-pilot was acting alone or had a co-conspirator, adding another level of confusion and terror to the ordeal.

"People were crying, yelling, praying. I was in complete panic. Cold. We were then waiting for an update, an information, what was going on. But it never came," the redditor explained.

For much of the flight, the hijacker maintained very little communication with the rest of the plane, only speaking with the pilot during the six hours and warning him that he would crash the plane if he continued his attempts to break into the cockpit.

OK3n said that flight attendants did their best to maintain calm in the cabin and that many passengers were actually able to maintain their composure for much of the hijacking. But of course, not everyone was as comfortable with the situation, including the redditor who chose to share his story.

"For the next 6 hours, I was imagining every possible outcome of this story: from suddenly crashing into the ocean, to hitting a building, to crashing into another plane, to landing and being killed as a martyr. [...] Every single second of those 6 hours of uncertainty and soon-to-be death was a psychological torture. I broke down, let everything go, said goodbye, though[t] of my family, of moments in the past, of who will inherit my stuff and much more."

After the 6 hours of terror, the plane finally landed in Geneva and the hijacking co-pilot lowered himself out of the plane where he was soon met by Swiss police. At that point, Swiss tactical forces entered the plane and slowly evacuated everyone, which, by OK3n's estimate, took about an hour — roughly 2 to 3 minutes per person.

According to the Washington Post, video filmed by passengers showed police inside the cabin as a voice over the cabin intercom instructed them in English: "Your attention please, this is a police operation. Please don’t move. Stay relaxed and keep your hands on your head."

It was not immediately clear why the co-pilot chose Switzerland or why he was seeking asylum from Ethiopia, but Human Rights Watch says Ethiopia's human rights record "has sharply deteriorated" with the government restricting basic rights of freedom of expression, association and assembly.