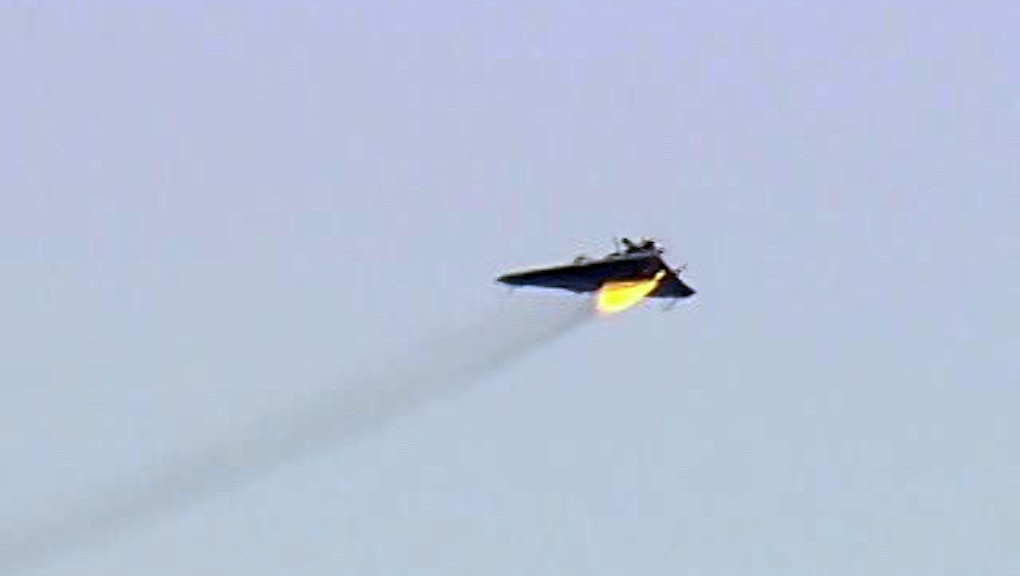 This is What the Navy's Newest Weapon Does to Enemies

That's the new toy the Navy gets to play with soon, as the solid-state Laser Weapon System is scheduled to deploy on at least one ship in the Persian Gulf by this summer. It's designed to fight what the Navy calls "asymmetrical threats" — unmanned aerial drones, speed boats laden with explosives, swarms of smaller ships like missile boats and patrol craft, and tuxedo-wearing British men in jetpacks.

Here's a video of that weapons system in action. (You can probably skip the second half of the video, which is mainly some truly terrible CGI work.)

In just a few seconds, the laser turns an aircraft into a smoking heap of wreckage barreling into the seas.

And for the Navy, the best part is that it's cheap. An Interceptor missile costs up to $1 million each, making it "cost-prohibitive" to deploy defensive systems en masse. But the solid-state laser, which uses 30 kilowatts of electricity a shot, costs just a few dollars to fire. And it's powerful; while invisible, the beam burns through targets and fries electronic systems with no developed countermeasures.

It's not the only futuristic weapon the Navy plans to deploy soon. Land-based lasers are quickly coming to America's next battlefield (because let's be real, there will be one no matter what we have to say about it) with the HEL MD defensive laser system, which is capable of shooting mortar rounds, rockets, missiles, and low-flying aircraft like drones and helicopters out of the skies before they hit ground positions.

This prototype of a futuristic rail-gun system is the first step in a system planned to enable the United States to possess conventional strike capabilities "anywhere in the world within an hour."

Full deployment of railgun systems could commence by 2025 and make "today’s firearms comparable to crossbows against muskets." Meanwhile, the Navy plans to test a more functional prototype on a ship at sea within two years. The only destroyer capable of producing enough energy to power the system is the U.S.S. Zumwalt, currently being built at the Bath Iron Works in Maine. That ship looks like this:

Still, there's always more progress to be made. Are our space-age lasers really enough to deal with all our enemies? Maybe we need something capable of making millions of voices suddenly cry out in terror and be suddenly silenced. Something a little bigger.