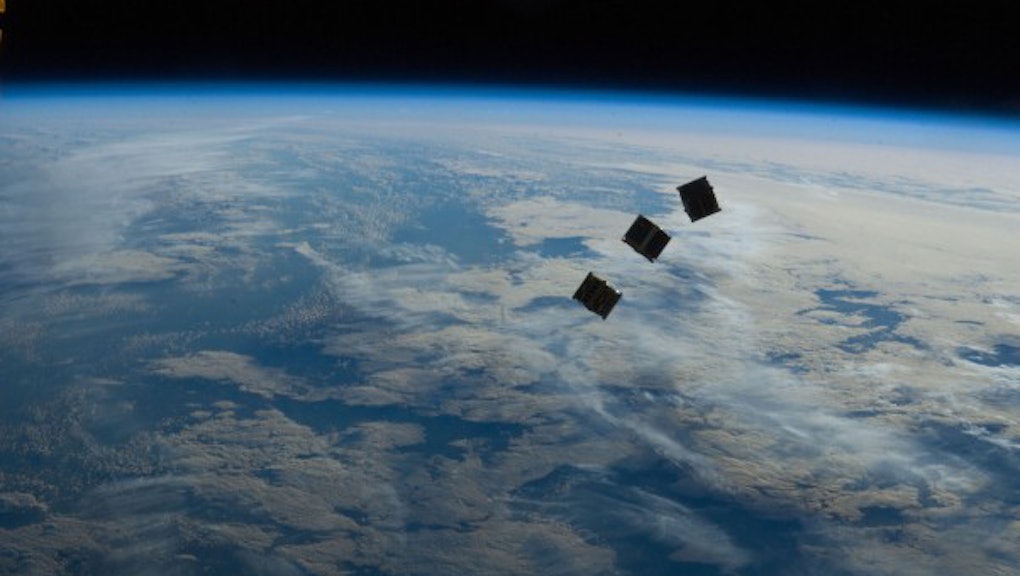 These Small "Cubesat" Boxes Could Disrupt the Great Firewall of China

While we were worrying about cable mergers and the rising cost of Internet providers, activists have been working on a space-age solution to connectivity: the Outernet.

The novel concept is being pioneered by Media Development Investment Fund (MDIF), a New York-based organization that provides financing and assistance to develop news outlets "in challenging environments." With the Outernet, they plan on creating a one way data broadcast system that circumvents national censors and allows people to freely consume content around the world. The system will only transmit data one-way, from space to earth. Users will not be able to upload data through the system.

How does it actually work? The company hopes to launch hundreds of low-cost satellites, called cubesats, into low orbit around Earth. A network of ground stations will feed data to these satellites, which will use datacasting technology to transmit data over GPS waves.

The free-to-access network will initially only offer access to few sites, though the group plans to offer a browsing feature later on. Data from the satellites will be broadcast on loop until new information is added. "It's the modern version of shortwave radio, or BitTorrent from space," reads the introduction on the website. Users in the network would be able to flick through websites, just as with television signals.

Unfortunately, the MDIF does not foresee the Outernet being applicable to everyone, especially those in urban areas. As per the organization's mission, the project is meant to bring online access to those who live in areas with restricted access, such as China and North Korea.

"[I]n all likelihood the noise floor in modern urban areas will be too dense. As much as we would like everyone to use Outernet, it's really meant for people who would otherwise not have access to information," wrote Syed Karim, the project lead on the Outernet, on a Reddit thread.

Still, the project is an exciting step towards challenging the status quo established by big telecom companies that dominate the online market. Countries that have attempted to censor or tax the Internet probably won't be too happy about the idea either. Karim said that he expects serious challenges as the MDIF project moves forward: "We will fight ... and win. We'll need help, of course," he wrote.

The company hopes to raise enough funding to launch the satellites by 2015.