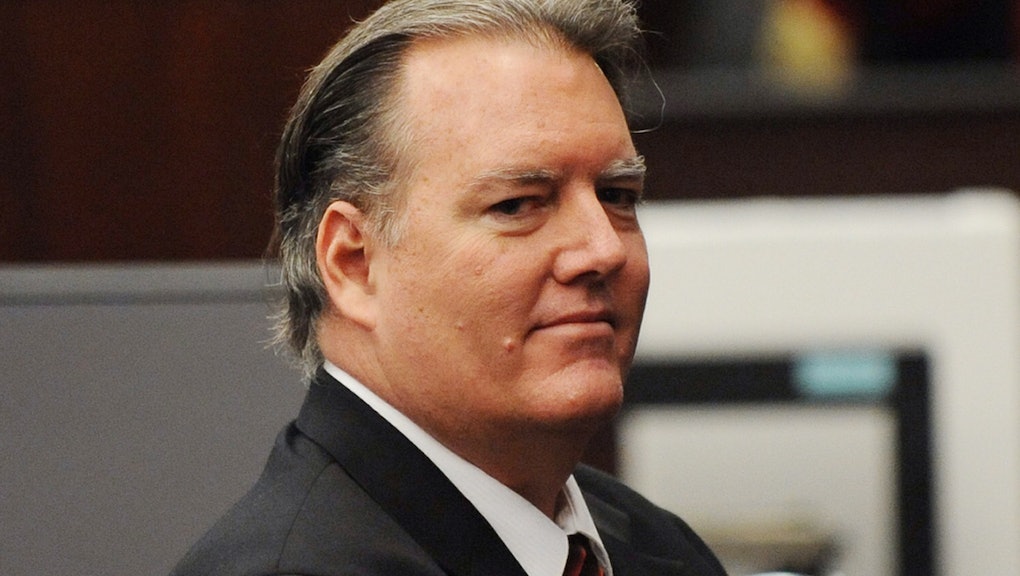 Just six months after the acquittal of George Zimmerman for the death-by-shooting of 17-year-old Trayvon Martin, another racially-charged trial for the murder of a black teenager has infuriated opponents of Florida's "Stand Your Ground" laws and a justice system biased against black people, even when they're victims.

In 2012, Dunn was arrested and charged with firing upon a car filled with teenagers at a gas station after getting in an argument with them over the volume of their music. One died, and the others fled. This week, Dunn was convicted of the attempted murder of three black teenagers and three other charges. But the charge of the murder of 17-year-old Jordan Davis resulted in a mistrial after the jury failed to reach a verdict.

Here's the twist, though: While Zimmerman's case was tainted throughout with the specter of racism, in that trial the defendant went to great lengths to distance himself from accusations of bigotry. Dunn basically isn't trying, and may have outed himself as the ugly mouthpiece of living racism in prejudice in the American South and Florida. In recordings of nine phone calls from December 2012 released by the State Attorney's Office, Dunn compares himself to a rape victim:

I was the one that was being preyed upon and I fought back. It's not quite the same but it made me think of like the old TV shows and movies where like how the police used to think when a chick got raped going, "Oh, it's her fault because of the way she dressed." I'm like, "So it's my fault (laughing) because I asked them to turn their music down. I got attacked and I fought back because I didn't want to be a victim and now I'm in trouble. I refused to be a victim and now I'm incarcerated."

Of course, Dunn was never actually attacked — he actually testified at trial that he thought he saw a shotgun in Davis' car, and so opened fire in self-defense. So his comparison to rape victims isn't just horrifically offensive, it's also near-farcical in its complete lack of self-awareness.

But in previously revealed letters from jail, Dunn very willingly paints a portrait of the kind of attack he thinks he's under, and it's clearly racial.

A letter released in early February by the State Attorney's Office from Dunn to an unknown recipient shows just how he feels about other black inmates:

It’s spooky how racist everyone is up here and how biased toward blacks the courts are. This jail is full of blacks and they all act like thugs. … This may sound a bit radical but if more people would arm themselves and kill these **** idiots when they’re threatening you, eventually they may take the hint and change their behavior.

Dunn, on trial for the unnecessary shooting of a black teenager and attempted murder of three others, apparently doesn't consider his behavior "thuggish." Dunn doesn't care. In another letter written to his girlfriend and highlighted by HLNtv, he writes:

I just got off the phone with you and we were talking about how racist the blacks are up here. The more time I am exposed to these people, the more prejudiced against them I become.

And in another letter to his grandmother, he trots out the "I'm not racist, I'm just intolerant of certain cultures" card:

I’m not really prejudiced against race, but I have no use for certain cultures. This gangster-rap, ghetto talking thug ‘culture’ that certain segments of society flock to is intolerable.

Legal experts contacted by Al-Jazeera America say that while Dunn didn't claim prosecutorial immunity under Florida's "Stand Your Ground" laws, the statutes clearly colored the decision and set the context for Dunn's hung jury on the charge of murder.

"The 12-member jury may have genuinely thought Dunn was initially justified in firing the first several bullets to defend himself from Davis but then went too far by continuing to shoot as the fleeing teens drove off. By then, the sense of emergency had passed, so it’s easier to come to an agreement on those charges."

"They were trying to interpret the jury instructions, and they clearly struggled with it, having deliberated for 30 hours. Normally, you don’t shoot first and ask questions later. But the conduct promoted by ‘Stand Your Ground’ creates a different context, and that’s what the jury struggled with."

But that context is clearly racial. University of Miami legal professor Donald Jones says that the laws protect even an initial aggressor: "In this case, Dunn could have moved his vehicle. He didn't have to subject himself to the loud music. But the law promotes the idea that you can use force whenever you feel threatened."

"Throughout the Deep South’s history, there’s been a pattern of whites shooting blacks who are perceived as threatening. In many ways, these cases are reminiscent of the lynching era, when black kids were getting killed simply because they were deemed threatening on a basis that was entirely subjective."

This chart from PBS represents the percentage likelihood that homicides will be found justifiable compared to white-on-white killings. The disparity is stark and clear, and it serves to protect people like Dunn.

Defenders of the law will doubtless argue that Dunn's case is a specific outlier, or that he will spend the rest of his life in jail regardless of his conviction in the Davis case (and thus the system works), or maybe claim his racial attitudes are immaterial to the crime in question. But it's clear that the deck was stacked in his favor the whole time.