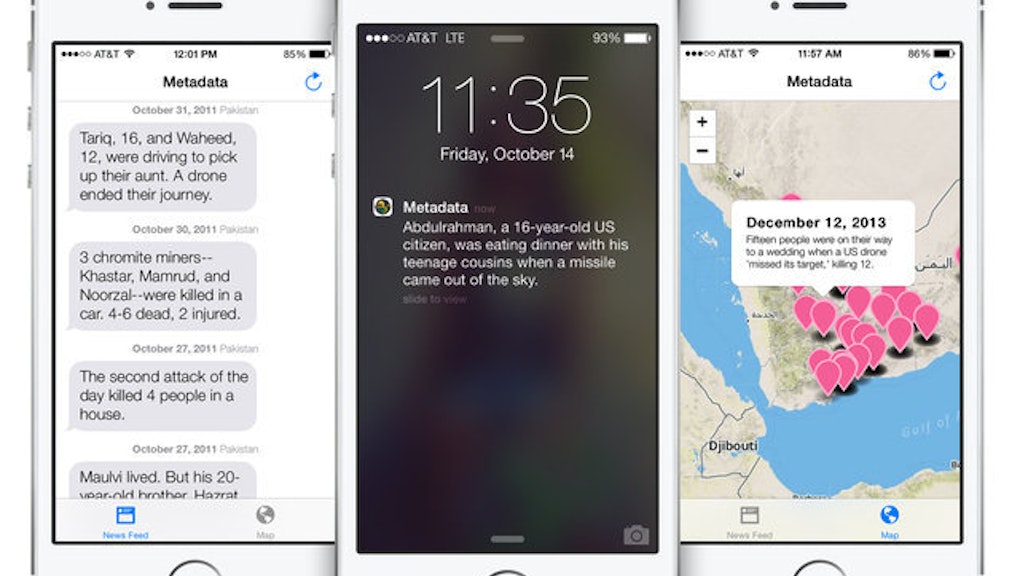 This New iPhone App Alerts You When There's a Drone Strike

It began with a simple question: Do we want to be as connected to our foreign policy as we are to our smartphones?

Last week, New York-based web developer Josh Begley answered that question with the launch of MetaData+, an iPhone app that sends an alert to your phone every time the United States conducts a drone strike.

"For me, it's a way to plug in and learn a little more," said Begley. "To work toward a more granular understanding of what these covert wars look like in Pakistan, Yemen, and Somalia."

He created the app in 2012 under the original name Drones+, but Apple rejected the app five times, taking nearly two years for the app to be available to the public.

The App Review Board claimed that Begley's app was "not useful or entertaining enough" and something that "many audiences would find objectionable."

Begley even spoke with a representative from Apple on the phone, who said that if the app was about drones, it just wasn't going to be approved. Finally, after he removed the word "drone" from both the name and the description, the app was accepted.

For Begley, the new name has a double meaning. It not only describes the app's purpose (displaying metadata on news reports about drones), it also emphasizes the underlying basis on which some of the strikes are carried out.

President Barack Obama's U.S. drone program reached its fifth anniversary this past January. The U.K. Bureau of Investigative Journalism has calculated that during the past five years, at least 2,400 people have been killed in drone strikes, though some politicians, including Senator Lindsay Graham, believe the toll to be much higher.

Obama has repeatedly defended drone strikes, claiming that "drones have not caused a huge number of civilian casualties," as most have been "very precise, precision strikes against al-Qaeda and affiliates." However, records have shown that in 2012 alone, 236 civilians, including 61 children, have been killed by drone attacks.

Despite the alarming rate of civilian casualties, the public still does not know or understand the full magnitude of the covert U.S. drone program. "Right now, it's easy to project force across distance and not have to see the consequences," said Begley.

However, with tools like MetaData+, hard-to-find information suddenly becomes as accessible as your Gmail, reminding users that drone strikes are becoming a defining feature of American wars.

Since its release on February 3, MetaData+ has been downloaded over 15,000 times, with 50 downloads in Yemen and 85 in Pakistan. It is freely available for download on the iTunes App Store and so far holds a perfect, five-star rating.